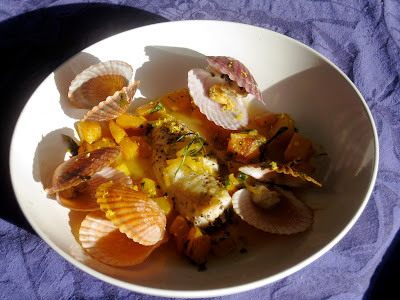 I love waking up on a Friday morning to sunshine, no alarm clock, and the brilliant prospective of going to multiple markets! Come to think of it - I was going to check out a new French market, Marche du Sud, on the Upper East, but was so excited about my previous purchases that I completely forgot about it until now.  Next time!  My main concern today was to pick up as many items as possible for one of the greatest holidays of the year - Thanksgiving!  And also to see what tickled my fancy as far as a meal went.  Union Square here I come! I traipsed through the market, brushed off non-profit volunteers (I'm SORRY - yes I want to save the environment, but I HAVE to get to cooking sir!), got overly concerned that brussels sprouts were somewhere around the $4/lb mark (?!), and wondered why people STILL had tomatoes available. COME ON. Unbeknownst to me, there was also a "holiday market" at Union Square with a bunch of vendors with some good, some garbage goodies - although I did get interviewed by New York Public Radio - must have been the red coat! I was really trying to be good and think ahead as far as holiday gifts go - unfortunately, I was too overwhelmed by the amount of STUFF and completely random layout of the place. To Trader Joe's!  Thank you Joe for being a savior - 2.49/lb for brussels sprouts - that's more like it! And cranberry sauce - yes, folks. You cannot beat the taste of prepared cranberry sauce.  Ask any chef, and this is the case. It's not worth your time attempting to make it.  Someday I'll conquer that though!
Post TJ's and a ridiculously long line, I bee lined my way up Broadway to that place I should get a frequent visitors card to.  They always have SOMETHING that will inspire me in the realm of cookery, since the market failed to do so today.  Fast forward to the fish counter: looks great, but nothing really was jumping out...Chasse to the right to the curstacean/shellfish area and what do I see? Hues of purple, orange, pinks, and blues in little, in-shell Nantucket Bay Scallops.  Now the bulb has lit, and the gears have started grinding! Black bass, check.  Pushing through troves of people to get to the produce, check (first trying Mostarda de Pere - OMG. I'm making some next.).  Beautiful tarragon, beautiful winter squash, and I am off! With ingredients in tow, it was time to had back to good ole Midtown!  This dish turned out better than I imagined - savory, tart, warm (from the coarse ground pepper and broth), and gorgeous.
First, let's talk tarragon.  This is one of the most underrated herbs of all time.  It's sweet and lightly anise-y, and frankly, perfect.  I've gone through stages of tarragon obsession and left it, and this may have taken me OFF that wagon.  A sprinkle here with a light poached chicken, a dash there with a (REAL) omelet - tasty treats to say the least. 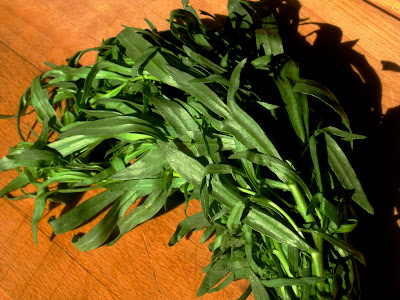 And, when I find a bunch with large, crisp beautiful leaves as such, I really can't resist.  They seemed perfect!
Next up, bay scallops.  In season November-March - if you get them fresh, these are the sweeter, and obviously tinier version of the scallops most are used to.  Shell-wise, the bay scallop shell is what most people imagine when they think of scallop shells - beautifully colored, with deep ridges.  Again, with any scallop, big or small, they should be fresh, with no "fishy smell" at all.  When you get live, in shell scallops you have to clean the scallop at some point.  Remember those pictures back in pre-college school days (elementary, middle, high school - I don't know) - but scallops have about a hundred of Frank Sinatra baby blues.  Not a precious part of the meal - and that's along with scallop offal if you well.  You can remove this either pre-cook, or post cook - it's easier post cooking, but it's really up to you. Bay scallops have an extremely delicate flavor - hence why a subdued lemon and tarragon broth seemed to be appropriate.  Great flavors, but not too intense! On to the recipe - I'm getting hungry again!
Nantucket Bay Scallops & Black Bass in Lemon-Tarragon Broth
For two
10 bay scallops, preferably in shell for presentation
1 fillet black sea bass
2 cups chicken broth
1/2 cup white wine
1/3 preserved lemon, thinly sliced
1 lemon, zested and halved
3 T minced tarragon
1 C winter squash, cut into 1/2 inch dice
Olive oil/grapeseed oil
Sea Salt
Fresh ground pepper
For the broth:
To start, make your broth.  combine the stock and the wine in a saucepot and bring to a boil.  Once it's boiled, toss in 2 T tarragon and the preserved lemon.  Remove from heat, squeeze in juice of 1/2 lemon, stir, cover and remove it from heat. 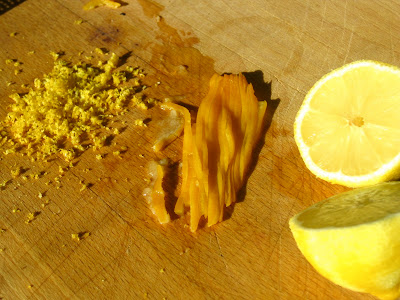 For the squash:
In a medium saute pan, heat enough oil to cover the bottom of pan over high heat. If you;re using olive oil, heat the pan over medium so it doesn't smoke and burn. With grapeseed or vegetable oil, heat that pan up! Throw in your diced squash and saute until browned, crispy on the outside, and creamy on the inside, about 5-7 minutes. 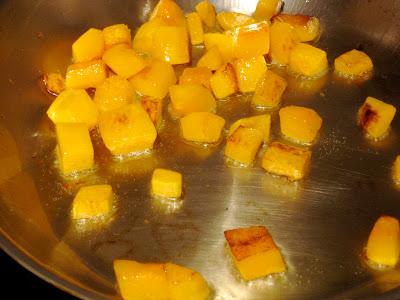 Once the squash has browned, throw in about 1/2 T salt, some fresh ground pepper, and 1 T minced tarragon and toss, cooking for one minute more.  Remove with a slotted spoon and reserve until later.
Black bass:
place the fillets skin side down and cook until the skin is crispy.  Again, with fish, it will let you know when it's ready to turn - it won't fight you when trying to turn it over.  Cook for about a minute on the flesh side until browned a bit and remove from the pan. 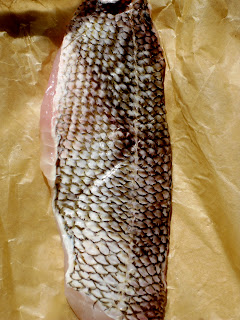 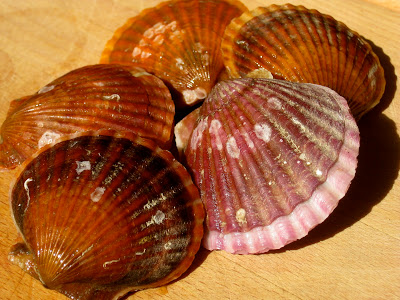 First off, beware that scallops are evil. I don't know if it's just me and mollusks/crustaceans, but they seem to hate me.  I've been attacked by spot prawn and langoustine, and NOW I'm getting attacked by BAY SCALLOPS. What is that about!? Why is it snapping at me?! Fine. I'm cooking you and I'm sorry, but at least I'm enjoying it. And yes, it was that guy on the left.

End of story.
Now that you've tried to bite me, I will bite you. For the scallops, bring the lemon-tarragon broth back to a boil. Gently place the scallops in the broth and let cook until open.  If you haven't previously cleaned the scallops, now is the time to do so - remove the surrounded "stuff" (um..eyes, guts, gross, I know). Basically get everything away until it resembles a bay scallop. 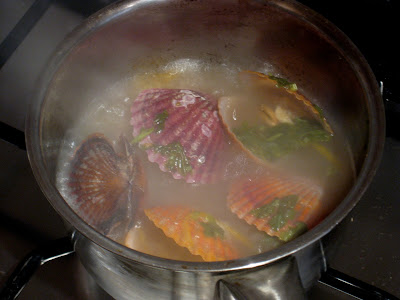 Now it's time to plate! 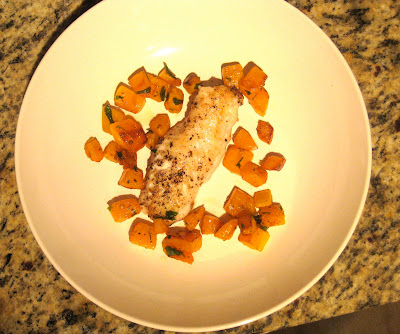 First, arrange all the ingredients besides the broth into your plate.  Everything should be kept warm - if it's been a minute, you can toss everything back in a saute pan to heat them up. 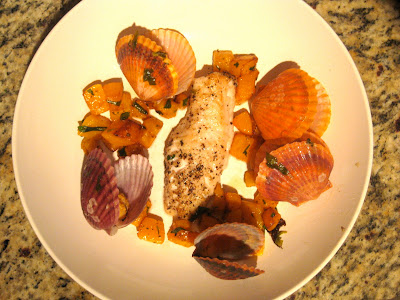 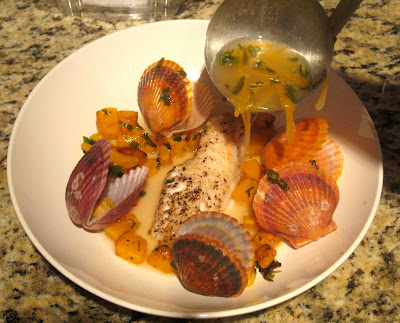 Pour in the broth, ensuring to get preserved lemon in each bowl. This broth is absolutely delicious, so put more than you expect is necessary. 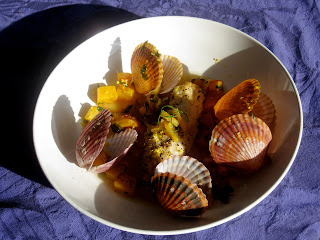 Once the broth has been poured over,  sprinkle some lemon zest haphazardly over the dish, chiffonade some tarragon leaves, and sprinkle those over as well. 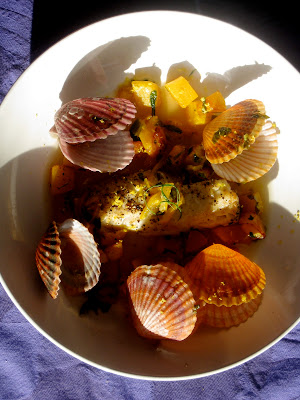 This dish was unexpectedly delicious. I knew it would be tasty, but it jumped beyond what I had envisioned.  No onion, no garlic, simple flavors, and not much equated to a savory delicious and filling dish. The broth wasn't too acidic due to the use of preserved lemons, but it was brightened up a bit by the finishing of lemon zest.  The combination of cooked and fresh, raw tarragon really created a great play between ingredients.  AND because all of the players in the game were quite delicate, the flavor of the black bass and the scallops were able to shine through.  And finally, the squash really added a nice creaminess and sweetness to the dish.  Put it all together and you'll have created a bite of perfection! 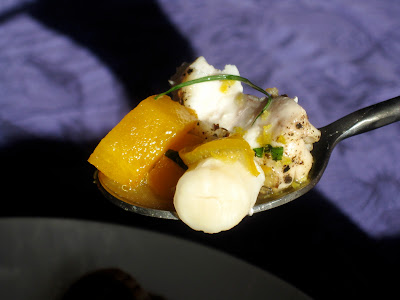 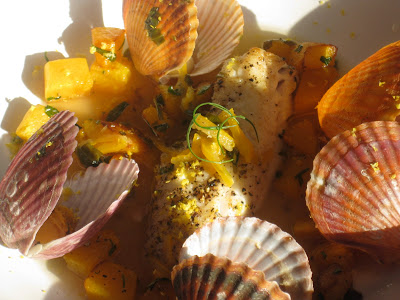 I have nothing leftover but a bit of broth, which I am totally okay with.  I may experiment with this just to make a soup out of.  If you've had Greek avgolemno soup, you know how delicious it is to have lemon in soup - but this is more subdued.  If you think about it, it really is a kind of deconstructed chowder. We may be onto something!


Enjoy this recipe.  It looks like there is a lot going on, but it comes together in a flash and the flavors are absolutely glorious.  Not to mention, you have bay scallop shells to use for decorations, scoops, or whatever you please!
Email Post
Labels: bass broth lemon nantucket scallops tarragon