*sung to the tune of 'Oh, Christmas Tree'* 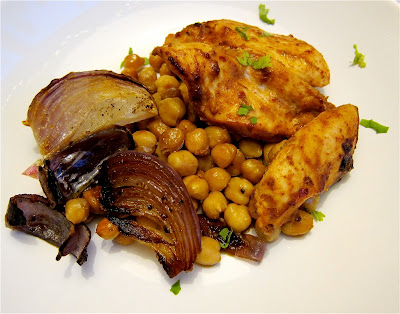 Tunisian influenced food may not be the first thing that comes to mind when you think of "comfort" food, or warming, wintertime fare.  But alas, it is just that! Of course, any cuisine varies with the seasons, but there are some flavors and cooking processes that just beg to be utilized during the colder seasons.  Does Tunisia even have a cold season? I have no idea - but even if they technically don't, I'm sure they were thinking of us snow bunnies when they created some of their dishes....no? maybe? Probably not. Just go with it.
Either way, I came back across this recipe in my little (figuratively speaking) recipe binder, and pounced on it the moment I read the ingredients again! This dish is absolutely stunning to look at, and the flavors are heavenly, and most importantly, it's super simple! Fact: also very healthy.  Confession: I've been on a cleanse for the past three weeks, and it clearly has limited my eating choices BUT with a little culinary trickery, most anything can make do! This one has definitely been rotated to the top of my repertoire for the time being. 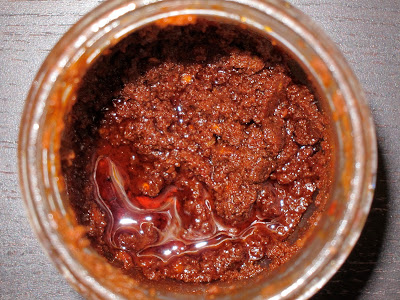 Sidenote: You can definitely buy different kinds of harissa in most stores - just check the "International Aisle" or whatever they call it these days. I was fortunate to have a good friend of mine give me a jar of his own homemade harissa - absolutely STUNNING!  But, you can also make YOUR own! Harissa is a fiery Tunisian chili sauce that is used in a lot of dishes - that being said, it's yet again one of those old world recipes that doesn't really have a recipe per se.  Go to 10 different Tunisian households, and you'll get ten different harissas, all equally delicious.  Kind of similar to Ras-el-Hanout in Morocco, or Bolognese in Italy...you get the idea. If you're in the mood to make your own harissa, I have a great recipe from the lovely Suzanne Goin! Recipe follows!
Tunisian Chicken Breast with Chickpeas and Red Onion
1/3 cup harissa (recipe follows)
1/4 C Greek  yogurt
1 T fresh lemon juice
4 chicken breasts (2 1/2 pounds)
One 19-ounce can chickpeas, drained well and rinsed
2 large red onions, each cut into 8 wedges
2 T extra-virgin olive oil
Kosher salt and freshly ground pepper
Mix together the harissa, Greek yogurt, and lemon juice.  In a large Ziploc bag, toss the chicken breasts with the harissa mix.  I generally pound my chicken breasts to an even thickness to ensure even cooking, and I usually cut them into smaller, equal sized pieces...mostly because a lot of chicken breast these days are GIANT!  Let the chicken breasts marinate at room temp for at least an hour.  According to a friend of mine from a favorite Pita Cafe back in Michigan (best Shish Tawook in the history of the universe!), when you marinate chicken in yogurt and lemon (amongst other things), it helps to tenderize the meat.  True? I don't know, but it's delicious, so heck...I believe it. 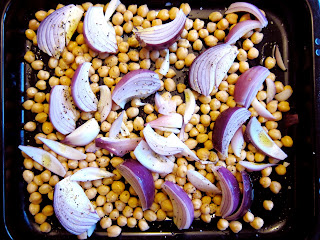 Preheat the oven to 425F.  In a large baking dish - large enough to hold the chickpeas and the chicken - toss the drained chickpeas and red onion wedges with olive oil and a generous sprinkle of salt and grind of pepper.  Roast in the oven for about 20 minutes or so, until the onions begin to brown, tossing occasionally.  Next, place the chicken breasts on top of the chickpea mixture, and sprinkle each with a bit of salt and pepper. Place back in the oven and roast for 15 minutes more.  I like to finish the dish by broiling it for about 5 minutes to get a nice crispness on the chicken breasts as well as some of the chickpeas.  Again, cooking time will depend on the thickness of the chicken breast.  To check if it's done, you can either use a thermometer (165), or you can cut into the thickest part of a breast and see if the juices run clear.  If it's slightly "blushed" that's alright - you'll be letting the chicken rest for about 5-10 minutes, during which time it'll still cook a bit more. 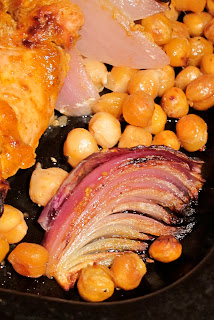 To plate, spoon some of the chickpeas and onion wedges onto a plate, and top with the chicken breast.  Kick back, and enjoy the flavors!  Seriously, the flavors that come out of this dish make it seem like it took ages to cook...granted if you made your own harissa, that is a little extra time...but once you have all the ingredients, it's ready in a pinch! Both the chickpeas and the red onions take on the flavor of the harissa-yogurt marinade as they cook, giving them a nice spiciness.  The chickpeas themselves retain a bit of toothiness, but are tender as can be - the chickpeas that are a bit browned on the top have a great crispiness to them.  And the red onions - roasted red onions, why have I been ignoring you for so long?! The red onions, believe it or not, are the star of this dish for me.  They're sweet, pungent, velvety, spicy...amazing. That's about it.  Heck, I'd even add more onions to the dish just to have more leftover! The chicken comes out perfect as well - the marinating period allows the breast to become a bit tender but remain juicy at the end.  The harissa-yogurt marinade is absolutely perfect, and the combination of flavors couldn't be any better.  Cozy up by the fire, and make this dish! 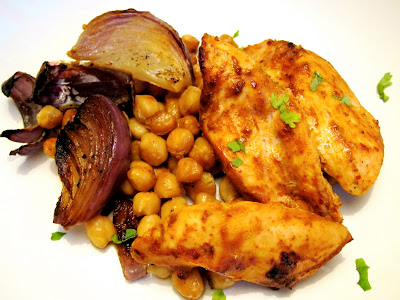 Heat a large sauté pan over high heat for 1 minute. Add chilies and dry toast for a few minutes until the chilies are blistered and slightly darkened. Place in a bowl and cover with very hot water for 15 minutes, covered. Return the pan to the stove over medium heat and add tomato. Cook for just a few minutes until the tomato juice has reduced and tomato is slightly darkened.
Meanwhile, toast the cumin in a small pan over medium heat for 2 to 3 minutes until the seeds release their aroma and darken. Pound them coarsely in a mortar. (You're more than welcome to use pre-ground, but freshly toasted and ground always is better!)
Drain the chilies well and put in a food processor with garlic, tomatoes, paprika, cumin, cayenne, vinegar, 1 t salt, and a pinch of pepper and puree. With the engine running, slowly drizzle in the oil and blend until incorporated and smooth.  Season with a healthy squeeze of lemon juice, and add more salt if you like.