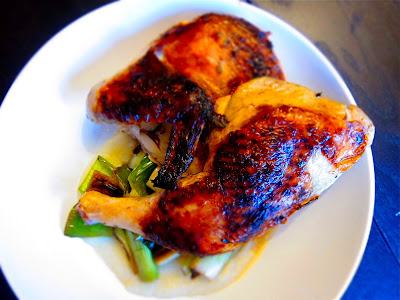 I've been wanting to cook some version of brick chicken for a long.....yes, long long time.  Why have I not? Good question! Excuses.  I'll just cook chicken breast.  Maybe just roast a whole chicken.  I don't even have a brick! You name the reason, I probably utilized it on more than one occasion.  Maybe I was just scared to cook it and thought it'd be more of a pain in the behind than it actually is? But excuses aside, I finally took my chances with it - and I am so glad that I did!  Not only does this render to be one of the most delicious tasting, juicy versions of chicken (all components!), but it is absurdly easy and dare I say...foolproof? Obviously, the chicken can be cooked in the same manner and served with any assortment of sides and accompaniments - but this combination proved to be wonderful.  Classic French flavors, great textures, and fully satisfying at that. Have a go at it!

In a strong ziploc bag or large glass pan, combine all of the ingredients and toss to combine. Allow to marinate for 2 hours in the refrigerator, or overnight. When ready to cook, pat the chicken dry and season both sides generously with salt and pepper.  Heat a large cast iron skillet over medium heat, swirling in just 1 tablespoon of olive oil.  Place the chicken pieces skin side down, and place a second skillet atop the chicken.  Here is where the fun starts! If you have a brick...more power to you.  You can wrap that in foil and place it right on top of the chicken.  I, sadly, do not have any bricks in my home...so I had to be resourceful.  Actual weights, large cans, olive oil bottle....you name it.  Try to get about 15-20 pounds of pressure on top of the chicken.  Once you've got enough weight, cook the chicken for about 18 minutes, until the skin is super crispy and golden brown.  The chicken fat will render while cooking, aiding in the cooking and crisping process.  After 18 minutes, remove the "brick" situation and flip the chicken over.  Pour in the chicken stock and squeeze in the juice of 1/2 a lemon, and simmer the chicken in it for another 3-5 minutes.  Remove the chicken from the pan and let it rest for about 5 minutes, reducing any remaining stock and scraping up and cooked bits in the pan - you'll use this as a nice pan sauce to pour over the chicken! When you're ready to plate, the full half of the chicken can be placed on the plate, or you can separate the leg/thigh from the breast/wing combo.

Bring about 2 cups of water to a boil in a steamer - bamboo, stainless, or otherwise - and lower to a simmer.  Place the celery root pieces in the steaming basket and cook for about 5 minutes, or until fork tender.  Place the cooked celery root in a blender/food processor with about 12 cup of the steaming liquid and puree.  Add more liquid if necessary - the puree should be smooth and velvety, but not too runny.  Season to taste with salt and pepper.  Set aside. 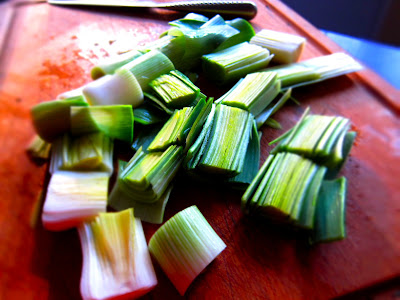 First, clean the leeks.  Cut the root off, as well as the tops just about where the leaves split off in two directions.  Halve the leeks and rinse them of any dirt.  Chop into 1/2 chunks.

In a large saute pan, heat up about 2 T olive oil over medium heat.  When the oil has heated up, place the leeks in the pan, cut side down.  Allow the leeks to caramelize on that side, not stirring until they've achieved a nice golden color, about 5 minutes.  Toss or stir, and cook a bit longer until tender.  Pour in the chicken stock, bring to a boil, and cook until the sauce has been soaked up by the leeks and reduced - it should not be liquidy.  Remove from heat and toss with the mustard and tarragon to finish.  Season with salt and pepper.

Now onto plating!! Spoon out a nice dollop of the celery root puree on the bottom of the plate, and top it with the mustard leeks.  Place the chicken on top - a whole half if you're serving two, or one of the quarters for four.  Finish with the pan sauce, and get ready to eat!

Seriously. This chicken is so good.  Most people know my obsession and love for chicken, but this takes it to the next level.  So easy! The skin is remarkably crispy, and every part of the chicken is crispy, no matter what portion it is.  The leeks and celery root pair perfectly with the chicken, and add a great variety of textures.
Email Post
Labels: brick celery root chicken leeks mustard puree tarragon

Tech IT Solutions said…
this looks like a heaven to the enthusiasts. i am going to head toward one as soon as i get done with it . this surely is going to be so much fun
December 29, 2017 at 7:09 PM