Well, needless to say, I have been a failure at posting this past month! Last time I checked, it was Thanksgiving, and now Christmas has almost already passed.  Family, house guests (literally ever since turkey time), holiday parties galore, and general chaos at work seem to be at play here! That being said, I could hardly believe that I legitimately cooked only a handful of times (literally, maybe three times) in the entire month. How is that even possible!? If anyone figures that out, send me some snail mail. But, now that the guests are gone and the holidays are almost over, I've got some peace and quiet to myself to catch up! 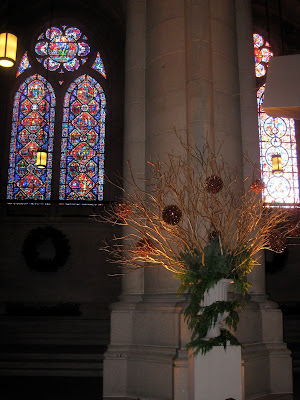 Either way, I was surely able to make up for the lack of cooking with the feast created while my mom and brother were in town for Christmas Eve!  I must say, my mom and I sometimes get carried away with ourselves when we're grocery shopping....a lot.  Especially when we had an absurd amount of money in Dean & Deluca gift cards.  And that means full bellies, great wine, and best for last: leftovers for ME on Christmas Day! Especially great considering I had to be surrounded by silly Waldorf brunch food from six am on.  Christmas Eve day began with a delicious lunch at Le Bernardin - perfect seafood in all forms, and carried over to an afternoon service at St. John the Divine (who knew there was one of the biggest cathedrals in the world up in Harlem!?).  As soon as we got home, it was time to start cook-a-lookin'! Disclaimer: my camera apparently attended holiday parties as well, got drunk and now has the permanent shakes.  Needless to say it is out of commish', with a few cooking photos on it (DEVIL!) - but fear NOT! My lovely brother had purchased the most amazing camera (due to mine's illness) that took absolutely STUNNING pictures, even without natural light.  So, thoughtful as they are, my mom and brother gave it to me as an early birthday present so I could use it for this blog! I am now a proud owner of a Canon S95. Brilliant! On we go: 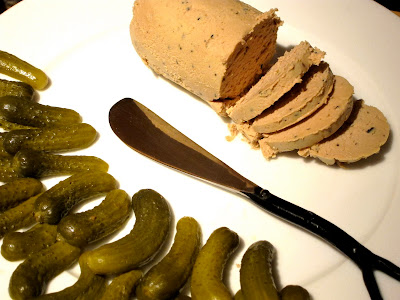 Thanks to D&D, we were able to start out with an amazing medallion of foie gras with black truffles and a bit of Sauternes from D'Artagnan, with cornichons as accompaniment.  This foie was heavenly - perfectly smooth, and the the truffles didn't overpower the taste of the foie - absolutely worth it as an appetizer! Spread on thin pieces of a crusty baguette, or even these charcoal crackers.  And no, I'm not shamelessly promoting - I wish these people gave me their crackers for free!  These crackers not only look great, especially in contrast with different cheeses, but they have a slight charcoal flavor that really is delicious! 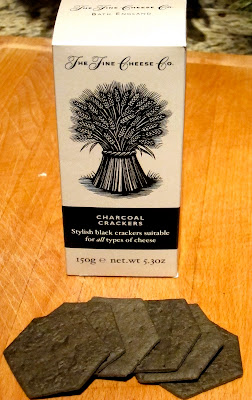 We were able to use these crackers with some great cheeses as well (clockwise from top) - Morbier, a soft cow's-milk cheese with a thin layer of vegetable ash cutting through the middle.  It's less creamy than a brie or camembert, and a bit more elastic if you will.  An aged Comte - semi-hard cow's milk cheese - a bit sharp, with a great crystallization throughout that gave it a nice crunch - kind of like you find in great Parmesans.  And lastly, my favorite, Barely Buzzed by Beehive Cheese Co.  This cheese is RIDICULOUS! It's rubbed with a mix of ground coffee beans from Indonesia, South America, and Central America, and lavender buds.  The cheese itself has the same texture as an aged cheddar, and has a bit of nuttiness to it, but the rub imparts a flavor that you would never imagine pairing so well with cheese! I've seen this cheese only in Petoskey (of all places) and Dean & Deluca.  If you ever see it, at least ask for a sample! 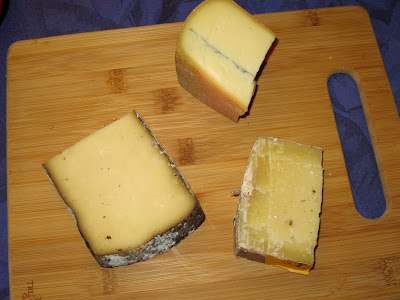 Next up, crostini time! I couldn't shy away from the epic crab crostini. Still as amazing as ever, this time with tarragon as opposed to chervil. And a new crostini staple in the kitchen - a herbed chickpea mix with balsamic.  Here's an easy recipe for you!
Ceci Crostini
1 c cooked chickpeas (canned is fine!)
2 T minced basil leaves
1/2 t minced rosemary
2 T minced Kalamata olives
1 T olive oil
1-2 T balsamic - depending on how thick the vinegar is - just enough to coat the chickpeas
1 large garlic clove, thinly sliced (I used my new handheld mandoline!!)
Sea salt and pepper to taste
Baguette, thinly sliced on the bias and lightly toasted


Mix all ingredients together as quickly as possible - be sure to be careful when adding the olive oil and vinegar so there isn't too much liquid - it may be better to add small amounts of balsamic at a time, mix, and taste as you go on until just coated.  Toast up some baguette slices, or better yet, saute them in olive oil until golden brown, top with the chickpea mixture, and enjoy! 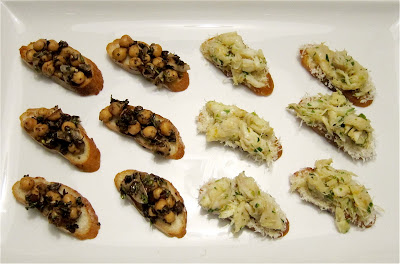 Delicious.
Next up: Sauteed Taylor Bay Scallops with a lemon tarragon broth. Sound familiar? You bet. The family HAD to try it! 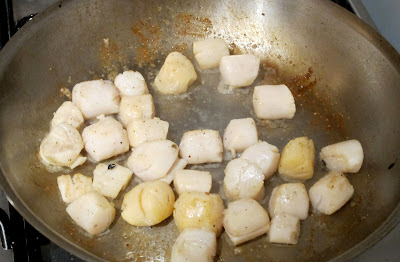 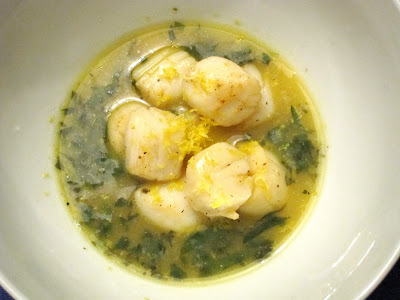 For our final seafood taste, razor clams were in store.  I was going to broil them on a half shell with some bread crumbs, parsley and garlic, but decided against it because I was getting impatient with the clams - to prep them, you have to quasi-shuck them, remove the belly, leaving the foot behind, and separating the shells.  Instead, I completely shucked the clams, cleaning the shells for presentation, preparing them in the simplest way, in typical tapas form:
Navajas al ajillo
15 razor clams, shucked, shells reserved
4 garlic cloves, finely minced
2 t crushed red pepper flakes (or more, depending on your desired level of heat)
4 T olive oil
2 T minced parsley
Sea salt & Pepper
Heat the olive oil in a saute pan until shimmering but not smoking - add the chili flakes and cook for about 10-15 seconds. Toss in the garlic, and cook for another 10-15 seconds, ensuring that you are constantly shaking the pan and/or stirring.  Toss in the razor clams and saute until just cooked through, only a couple of minutes, depending on the size of the clam itself.  Make sure that the garlic is not burning! Place each clam back onto a half shell, and spoon a bit of the garlic and pepper oil over each.  Finish with a bit of salt, pepper, and the minced parsley, and enjoy!  (I finished mine with black lava sea salt - beautiful.) 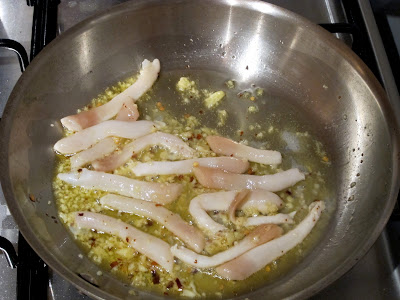 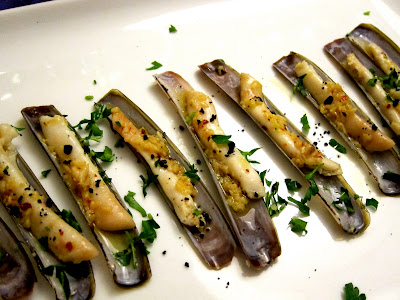 It doesn't end there! We had small portions of pork and veal agnolotti (a typical holiday filling), as well as a ravioli filled with parmesan, and prosciutto de Parma - all tossed with a homemade amatriciana sauce.  This sauce is from Amitrice in Abruzzo - a spicy tomato sauce that shepherds had in the evening after a long day in chilly weather.  It is classically served with bucatini, but I felt that it would be perfect with these little packets of goodness - and was it! Amatriciana sauce is generally made from guanciale, onions, tomatoes, red pepper flakes and pecorino.   This one was finished with a nice, full bodied, jammy red wine to round it out and add to its complexity, and a spice-rubbed guanciale was used instead of the pepper flakes.  Absolutely outstanding. 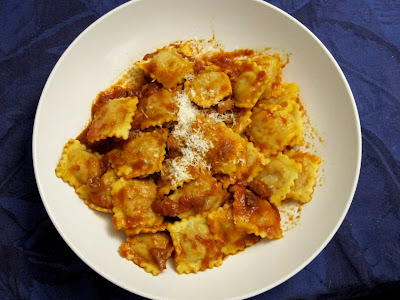 Ok, it really is almost coming to an end. I told you it was a feast!  Our final dish was a seared, spice-brined Magret duck breast with an apple-pear mash.  I generally marinate duck with an orange juice, balsamic, some spices, etc. but this time decided to brine it overnight with some very Christmas-y spices.  Some duck breasts have an enormous amount of fat on them - while the fat is amazing, it's sometimes necessary to trim it down a bit (as was the case today).  Once you've trimmed it, but still have at least 1/4 inch of fat, gently score the fat crosswise - then brine!
Frankincense & Magret Spice Brine
2 cups water
1 smashed garlic clove
1 cinnamon stick
3 cloves
1 allspice berry
1/2 t thyme
1 t rosemary
1/4 teaspoon nutmeg
1/4 t ground coriander
6 peppercorns
4 juniper berries
1 star anise
1 bay leaf
1 one-inch thick slice each of lemon zest and orange zest
2 T kosher salt
1 T brown sugar
1 Magret duck breast
Bring water to a boil with all ingredients and ensure that the salt and sugar dissolve.  Add a few ice cubes to help cool down - let the mixture come to room temperature.  Place duck breast and cooled mixture in a ziploc bag, seal, and refrigerate at least 24 hours.
When ready to cook the duck, remove it from the brine and pat dry. Place the duck fat side down in a cold pan, turn the heat on to medium, medium-high (you don't want to burn the duck), and let it slowly come to temperature.  Cook on this side until the fat has rendered and is crispy and golden brown. Flip the breast over and cook again for a few more minutes - to your desired temperature.  I like my duck rare, especially if it's a great product such as Magret.  Once you are through cooking, let the duck breast rest off of heat for at least 10 minutes - this will allow the juice to distribute evenly throughout the meat, and you won't lose them when you slice it.
Before cooking the duck, we made the mash - just peeled, diced apples and pears cooked over semi-low heat.  They have enough water content that they don't necessitate and liquid to begin with.  Just keep stirring occasionally, and it will turn into an applesauce of sorts.  Season with salt and pepper - we even added a little cinnamon/clove water that we had simmering on the stove to give it a bit of spice.  We added some poached pears, Bayley Hazen blue cheese, and Mugolio pine bud syrup to the dish and voila! (And the obligatory salad as well). 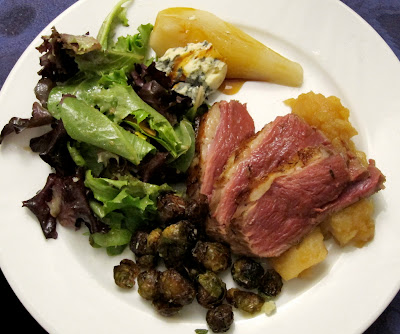 The flavor of the duck from the brine was absolutely OUTSTANDING.  It did use a lot of very strong herbs and spices, but it just penetrated the duck breast, leaving it extremely tender and giving it a a subtle complexity - perfect with the apple mash, pear and Bayley Hazen.  This dish was the epitome of the holidays, and the brine was stunning - a definite go to for duck at anytime!
As you can probably tell, I was pretty stuffed from this feast - and everything was absolutely delicious and held their own as separate courses. It was a great variety of cuisines, flavors, textures, and techniques.
Email Post
Labels: chickpea christmas crab crostini duck razor clams scallops