ringing in the new year 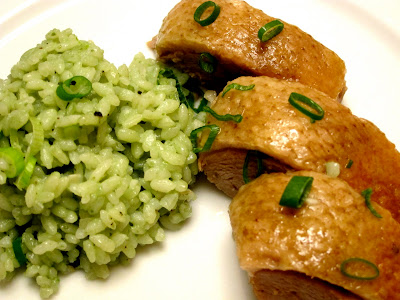 Happy Chinese New Year - the year of the rabbit! Of course, that means I have to do something in honor of the holiday.  Thankfully, I somehow managed to get my hands on a first edition copy of Irene Kuo's "The Key to Chinese Cooking"a few years ago.  Kuo is basically the Julia Child of Chinese cooking - the woman knows her business!  And this book, from 1977, is a testament to that.  She speaks of all the different Chinese cooking methods, preparations, ingredients - you name it! And, all in wonderful illustration form.  Actually, hilarious illustration form, with motion lines and everything.  The best thing is, even though these are some vintage recipes, they are still relevant and just as delicious today! So, I know that there are specific, traditional foods for Chinese New Year, but I was in the mood for some duck - especially after reading some of Irene's recipes.  In reality, I would've loved to have cooked Peking Duck, but I clearly did NOT plan ahead (typical), and that takes a good couple of days to cook it properly.  And I only had a couple of hours! So it was time to run and pick up all the necessities.  Dish of the night: Shanghai Duck with Scallion-Bamboo Rice. 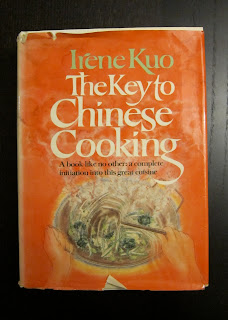 The duck is (ingredient-wise) relatively simple - as you can see in the following recipe, it's a bit involved and takes some time, but the end result is outstanding.  The bamboo rice (a random grain I picked up at Kalustyan's) is regular rice that has been soaked in bamboo juice, giving it a beautiful peridot shade and a nice fragrance to it.
Note: Plan ahead! You can make the sauce ahead of time - it takes an hour to cook. This recipe is for the most part verbatim, because I am thoroughly entertained by the way she wrote her recipes. If you ever see this book at a used book store, pick it up!
Shanghai Duck
The Key To Chinese Cooking
1 duck, about 5 lbs
2 T salt
2 large scallions, cut in half
4 quarter-size sliced peeled ginger, each 1/4 inch thick
1/2 stick cinnamon
2 whole star anise
3 cups water
2 T dark soy sauce
1 T dry sherry
2 T hoisin sauce
3 T crushed rock sugar
1 T sesame oil
Bring a large pot (big enough for the duck) of water to a boil and slither in the duck. I love the terminology Irene uses in this book!  When the water boils again, swish the duck to rid it of any foam and drain it. Remove the tail. Rinse the duck in cold water and pat dry.  This procedure cleans the duck and tightens the skin for better coloring later. Rub the salt over the outside and inside of the duck. Let it macerate on a plate while you prepare the sauce for simmering. 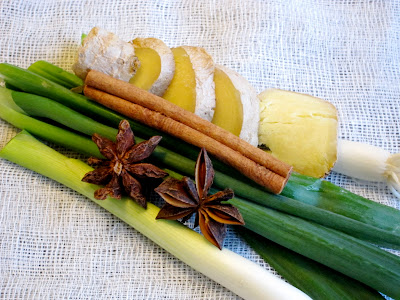 Put the scallions, ginger, cinnamon stick ,and star anise in a double-fold piece of cheesecloth and tie the bundle securely.  Place it in a heavy pot just large enough to take the duck; add 3 cups water and bring to a boil over moderate heat. Cover and simmer over very low heat for 1 hour, pressing and turning the herby bundle occasionally to extract the flavors. Then remove the bundle, press it between 2 small plates over the pot and discard the residue. 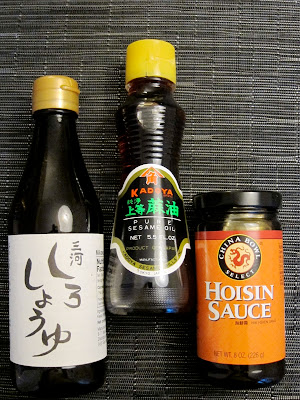 For the duck! Bring the liquid to a boil again then add the soy sauce, sherry, hoisin sauce, and rock sugar (I used granulated sugar), and stir until the sugar dissolves. Lower in the duck, breast down.  Turn heat to medium to maintain a strong simmer, cover, and simmer the duck for 45 minutes, basting and shifting occasionally to color it and prevent it from scorching. Then turn the duck breast up and simmer covered another 40 minutes, basting and shifting occasionally.  Turn off the heat. 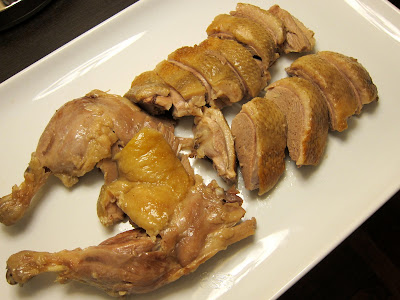 Now comes the special basting;; it may seem strange at first, but the process is designed to give the duck a beautiful glaze, so do it despite any misgivings. Place a colander over an empty pot and set it next to the one containing the duck. Lift the duck into the colander. Skim off most of the fat from the sauce, add the sesame oil, and bring the sauce to a boil over high heat. Turn off the heat and pour the hot sauce over the duck.  Then transfer the colander with duck to the empty pot and bring the sauce again to a boil, and pour it over the duck again. Repeat 4 to 5 times.
Serve!
Scallion Bamboo Rice
1 cup bamboo rice
1/4 cup minced onion
2 T olive oil
2 cups water or stock
Kosher salt
Fresh ground pepper
1 scallion, thinly sliced, green and white parts 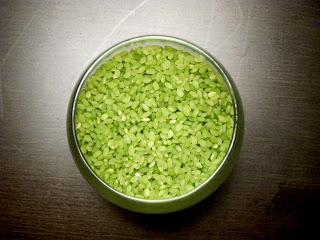 Standard rice!  Heat a sauce pan over medium heat and swirl in the olive oil.  When it shimmers, add in the onions and sweat for a few minutes.  Add in the rice and coat with the oil.   Pour over the stock or water and bring to a boil.  Reduce to heat to low, cover, and simmer for about 10 minutes.  Keep an eye on the rice to make sure all the liquid doesn't evaporate before the rice is through cooking.  If necessary add more liquid.  Season with salt and pepper to taste, and stir in almost all of the scallions.  Serve warm and top with more sliced scallions.
About this duck: all I have to say is WOW.  This is a serious vintage, throwback recipe - back from the day when cuisine in general, let alone Chinese cuisine, was not at its peak (as far as the vast majority was concerned).  A lot of people assume(d) that Chinese cuisine is just heavy, deep fried, sauce smothered chunks of meat. This is just the opposite! Kuo hits the SPOT with this Shanghai Duck.  Perfectly balanced flavors - and delicate at that.  The meat of the duck was falling off the bone and extremely tender, and just touched with the flavor of the sauce.  Even though the flavors are strong on their own, they came together in perfect harmony.  The rice added a nice color (obviously) to the dish, but really helped in brightening up everything with the bite of the scallions.  I must say, well worth the wait! 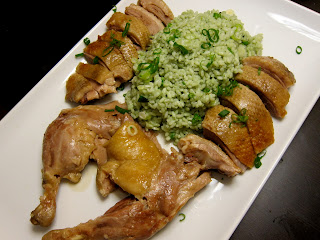