to poach or not to poach? 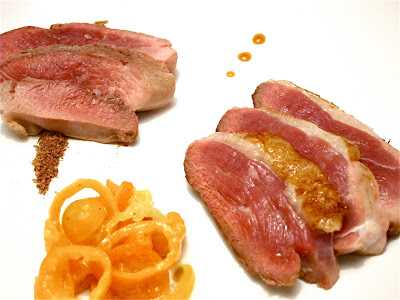 When it comes to duck breast, there really are endless possibilities when it comes to cooking method: baked, roasted, pan-seared, poached...you name it! I generally lean towards pan-searing - not only does it lend itself to a great, crispy skin, but it also helps achieve a delicious brown crust on the actual meat, thanks to our good old friend the Maillard reaction! Now, that's all fine and dandy, but pan-searing duck breast really makes a mess! With all that fat, grease goes flying everywhere, and you have to be careful not to get the pan TOO hot, or else it will start smoking! Deep cleaning, fire alarms, no good.  So, I decided to have a competition.  Could a plain old, naked duck breast simply poached in olive oil be just as good, if not better than the trusty pan-seared version? We shall see!!  Of course, this was dinner, so I had to have a few accompaniments to the duck breast. Flavors to play with: kumquats, cinnamon, and unsweetened chocolate. Pretty simple altogether but ultimately, quite delicious!
Kumquat Confit
1 c sliced kumquats
1/2 star anise
1/2 cinnamon stick
4 peppercorns
1 bay leaf
2 T sugar
Juice of one orange
Salt and fresh ground pepper 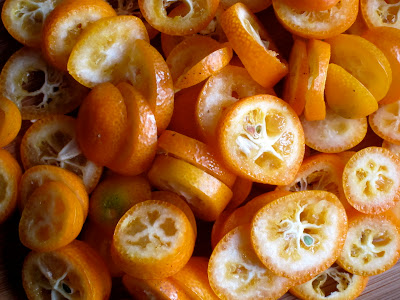 First, let's just talk kumquats. I LOVE kumquats. Especially picked right off tree...they're like little pops of goodness.  And if you've never had one fresh of a tree, go FIND said tree, even if you don't know whose it is, and pluck one off.  Yes, skin (sweet), pulp (sour!), seeds  and all!  So acidic that they make you pucker, but sweet and delicious all at the same time!  I could literally eat handfuls of them.  But, then the acidity kinda burns my tongue after a while. I guess I'm just a masochist.  Anyways, onto the confit!
Make a sachet out of cheesecloth and tie up the star anise, cinnamon, peppercorns and bay leaf. Bring 1 cup of water to a boil, then add the sachet, sugar, and the orange juice. Turn this down to a simmer and add the sliced kumquats.  Poach the kumquats until they're tender, about 6 minutes or so.  Strain the kumquats, reserving the liquid to reduce later.  Cook the remaining liquid over high heat until it has reduced to a thick, almost syrupy consistency.  Add the kumquats back in, stir to combine, and season with salt and pepper to taste - you may only need salt!  Reserve the confit for later, keeping it in the pan to heat it up later.
Now it's time to get busy with the duck breast.
Duck breast #1: fat on, trimmed a bit, and scored so the fat can render in the pan.  Tip time! When you're scoring duck breast, instead of just slicing straight down into the fat, it's best to lay your knife horizontal to the skin and drag it across.  This way, you won't run the risk of cutting into the actual duck meat, and will get the perfect scores every time!  I sprinkled ground cinnamon, finely grated unsweetened chocolate (you can use cocoa powder) and a little salt and pepper over both sides of the duck breast.
Duck breast #2: all fat and silver skin removed. And that's it.  Quite curious?
To poach the duck, you need a sauce pan large enough to hold the duck breast, and enough olive oil to cover that duck breast as well.  Heat the oil over medium-low heat for a few minutes - if you have a thermometer, get the oil up to about 140 degrees.  I don't have one, so I had to keep a close eye on the oil so it didn't get too hot!  It depends on how large your duck breast is, but for medium-rare, it should only take about 8 minutes or so.  After removing the duck, place it on a paper towel, pat dry to remove any excess oil, and let it rest for a few minutes.
For the pan-searing, heat a saute pan over medium heat - no oil necessary because of the fat! Place the duck breast skin side down in the pan, rendering the fat and cooking until the skin is crispy.  Flip the breast over and lightly brown the other side of the duck breast, cooking for a few minutes. Again, for medium rare, this should take about 8-10 minutes (unless it's from a giant duck)!  Remove the duck from the pan and let rest for a few minutes as well.
Start warming up the kumquat confit - while it's getting up to temperature, slice each duck breast across the breast.  For the final dish, I didn't want to discriminate against one duck breast by giving only THAT one the spices.  I placed a small amount each of the grated chocolate and cinnamon underneath the poached duck, and sprinkled it with salt and fresh ground pepper.
SO - poached or pan-seared!? I love my pan-seared duck, but the olive-oil poached duck was really delicious.  The meat was tender, and you really just got the flavor of the duck coming through.  The pan-sear was delicious, no doubt, but inevitably, there is a strong flavor of the rendered fat - obviously, since that's what it was cooked in.  Delicious, but sometimes distracting from the actual duck flavor.  Also, the poached duck really gets cooked a bit more evenly since the heat is attacked from all angles at the same time, for the same amount of time! Maybe do a little best of both worlds? Poach the breast, but render the fat by itself, cooking it until it gets crispy to serve on the side?! 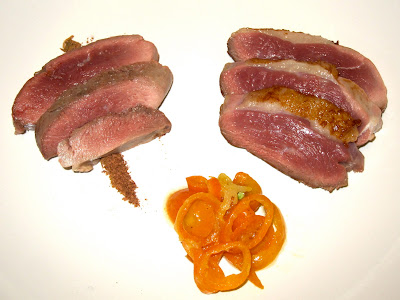 I digress. Back to the dish.  The chocolate and cinnamon were both nice subtly additions to the duck.  On the pan sear, they got a little toasted, which was tasty, and for the poached duck, the chocolate melted just a bit underneath the heat of the breast - also tasty! Put it all together with the kumquat confit, and you've got a match made in heaven! The confit is pungent, yet savory and not too sweet, and the spice combination with the duck add a nice depth of flavor to the entire dish.  (I added a few dots of Blis bourbon-barrel aged maple syrup on the side...epic!) This is definitely a dish, now out of cooking method competition, that I'll be recreating in the future!
Email Post
Labels: chocolate cinnamon confit duck kumquat poach seared