just for the halibut 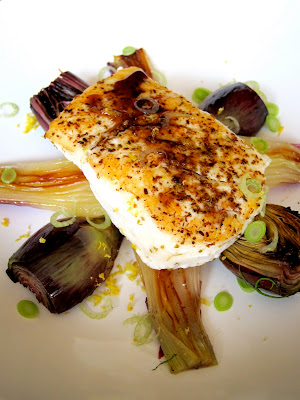 Ah yes, the halibut.  The wonderful king of the flatfish. While at the market, the glistening, pearlescent fillets really caught my eye.  And yes, those adjectives are appropriate.  There's a reason that the word for halibut in Middle English is "hallybutte" - flatfish to be eaten on the holy days.  Because it is just that delicious and succulent - truly the essence of the ocean. While scanning the counter for entirely too long, my favorite fishmonger pointed me towards the halibut.  A sign from the sea god! (Poseidon? Is that you?) And what better way to kick off June, when June is the kickoff for great halibut fishing?
My market travels also left me with some other items to play with.  One: saba.  I've been wanted to buy saba for quite some time, but always restrained myself in the past.  I obviously didn't have that power today.  Saba is actually a traditional Italian "simple syrup" made from concentrated grape must - usually trebbiano grapes.  And this isn't the kind of simple syrup we're all used to - it's more like a thick, aged balsamic, but with a bit of an acidic kick from the grapes.  It's very intense, very delicious, and not cloyingly sweet. Absolutely delicious.  I see the use of this quite often in my future!
And finally, I also came across many a baby vegetable - baby purple artichokes, baby fennel, and baby red onions to be exact.  Not that I have a thing for pint-sized produce (which I do, fine), but what better way to really showcase and maintain the integrity of said ingredient? Point in case.  On to the recipe! 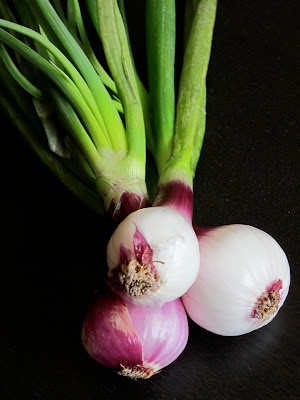 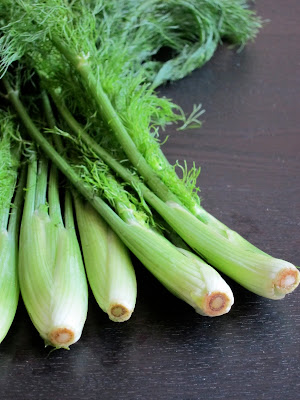 Fennel Pollen Crusted Halibut with Baby Vegetables (for 4)
2 lbs fresh Alaskan halibut fillet, portioned into fillets and skinned
2 t fennel powder
2 t salt
2 t fresh ground black pepper
8 baby red onions, most of green removed and halved
8 baby purple artichokes, prepared
1 bunch baby fennel, thinly sliced
Lots of olive oil
1 lemon, zested, then halved for juice
Begin by bringing a large pot of salted water to boil to blanch the artichokes.  Make an ice bath for post-cooking.  Prepare the baby artichokes by removing the outside leaves until you've reached the more tender ones, and cleanly chop off about 1/2 inch from the top of the artichoke.  Peel the stem and cut each artichoke in half lengthwise.  Place the artichokes in vinegar or lemon water to stop them from oxidizing. 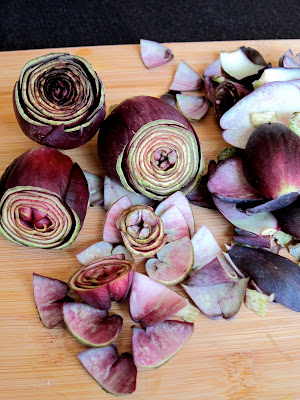 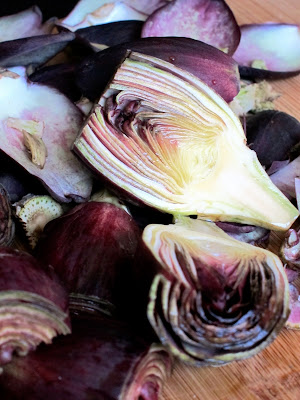 Next, start cooking your onions.  In a small pan, but large enough to fit all of the onions, slowly heat up about 1/2 inch of olive oil over low.  (I was so excited to use my vintage Le Creuset!) When it starts to slowly bubble, gently place the onions, cut side down into the oil.  Let these cook for at least 20 minutes, until they are tender and golden brown.  Remove and drain on a paper towel, setting aside.  Don't toss out the oil!  When the water is at a rapid boil, toss the artichokes in and cook for about 4 minutes, or until the stem is tender.  Shock these in the ice bath to retain color and stop cooking, and drain on a paper towel.  Once these have drained sufficiently, cook them for about 8 minutes, cut side down in the olive oil, allowing them to attain a nice golden color as well.  Set aside with the onions and keep warm. 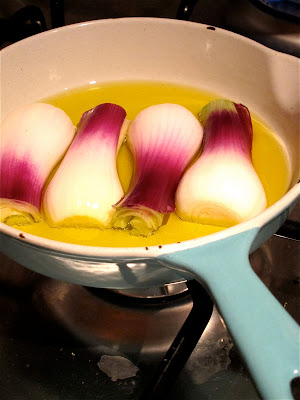 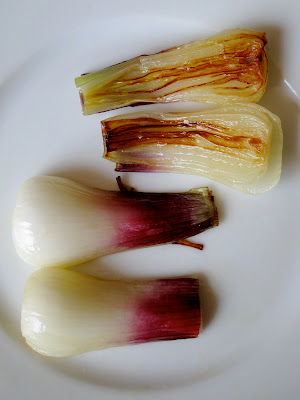 Sprinkle each halibut fillet with a substantial amount of salt and pepper on both sides.  On the flesh side, sprinkle each fillet with enough fennel pollen to cover.  Set aside.  Heat up a large saute pan (big enough that it won't crowd the fillets, otherwise you'll have to cook in batches) with about 3 T olive oil over medium-high heat.  When the olive oil has begun to shimmer, but not smoking, gently lay in each halibut fillet, fennel pollen side down.  Allow this to cook for about 5 minutes (depending on thickness), or until the fish has a thick, golden crust on it and can flip easily.  Finish cooking on the opposite side for about 2 minutes, or until just medium rare, and remove from the heat.
To plate, place the artichoke and onion halves on a plate or in a wide bowl.  Squeeze the juice of 1/2 lemon over the vegetables and sprinkle with a pinch of sea salt and about 3 grindings of black pepper.  Gently set the halibut fillet atop the vegetables,  finishing the entire dish with lemon zest, thinly sliced fennel and, if you have it, a drizzle of saba.  You could use an aged balsamic as well! 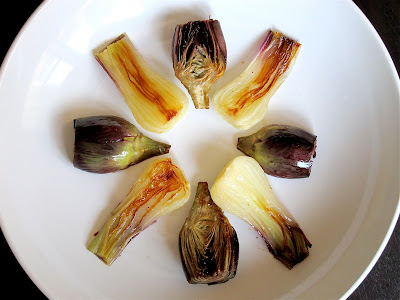 I must say, prior to and while cooking, I tried a) one small piece of the halibut raw and b) one small piece of the halibut pan seared with only salt and pepper.  The crudo was outrageous and ocean fresh - you can tell this is a cold water flatfish! But the initial bite of the pan seared halibut literally almost knocked me over - it was that delicious! Succulent, juicy, with a hint of sweetness. I knew there was some tasty goodness in my future with the entire dish! 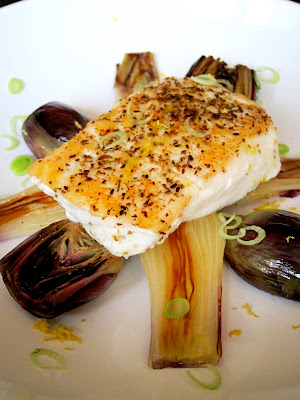 And was I right! The fennel pollen crust and sliced baby fennel took this halibut to another level, but didn't over power the freshness of the halibut itself.  The fillet had a perfect crust to give it a nice crunch as each bite flaked away.  Both the onions and artichokes held up on their own, again with a slight sweetness, but they did lend a bit more of a deep, savory earthiness to the dish with the lemon juice just enhancing the flavors of each.  The zest didn't hurt either!
And if you do have sabaje ne sais quoi but definitely adds something that your guests won't be able to put their finger on.
Do give this a try! Baby vegetables aren't truly necessary - their full-sized elders are definitely appropriate as well, just ensure that they are cut into smaller pieces and cooked longer to attain the deep, caramelized flavor.
Email Post
Labels: artichoke fennel fennel pollen halibut lemon red onion saba saute seared