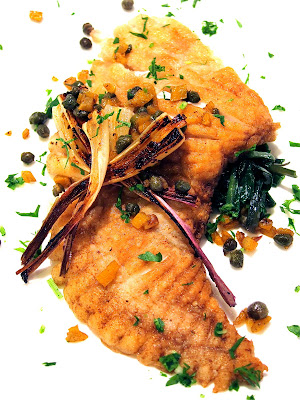 Imagine a stingray, gracefully gliding through the ocean beneath you, wings flapping as effortlessly as a soaring eagle.  Now imagine that same stringray, and contemplate it’s edibility.  Upon first thought, your mind may lead you to believe that this creature would have a tough consistency – leather boot-like, and perfectly inedible.  Alas, this is not the case.  Although the wing is in fact muscular, it’s perfectly tender and delicious.
Enter stage right: skate.  What did you think it was?  Some of you may know it, but others may not: skate is a member of the ray family. Yes, those same rays that we are cautioned to not step on when wading in the ocean – those evil creatures with whip-like stinging tails that can kill. But, fortunately for us, skates are only a cousin to those fatal creatures.  AND, there are two sides to that coin.  The delicate flavor and luscious tenderness of the skate wing is the perfect juxtaposition to it's evil cousin's stinging whip. 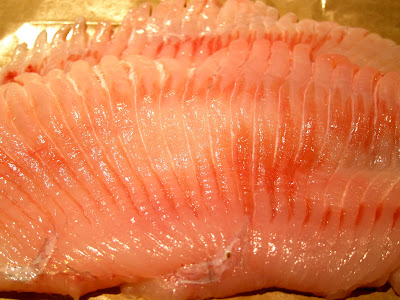 My fishmonger had gotten in some beautiful skate wings this morning, and was even cooking up a few pieces to sample out.  Again, some people are a intimidated by an ingredient they are unfamiliar with, especially one with the looks of a skate wing.  He simply coated in light flour, salt and pepper, and pan-seared it in some olive oil.  Really simple, really delicious.  Of course, I had to try it, even though I knew how my taste buds would feel.  It was more entertaining watching the unassuming passers-by sampling the fish, and seeing their faces light up when they tasted the little morsels.  Even the girl checking me out exclaimed (without having realized I bought the fish), “Did you try that fish he had back there?! It was AWESOME! I don’t even LIKE fish. It’s ALWAYS TOO FISHY!”  She proceeded to state that she only likes canned tuna, which in my head, really makes no sense when you don’t like fish because it’s too fishy – but to each her own.
Needless to say, I was trekking back home, beautiful, rose colored skate wing in tow, ready to whip up something delicious.
*sidebar* Jenny Haniver you ask?  A lady of old seafarer lore - proof that sea monsters DO exist! But not so much.  Back in the day (way back) sailors would find old specimens of rays and skates that had dried up, and subsequently looked like little monsters - sea devils if you will - leading to many a story and tale. Creepy.
Pan Seared Skate Wing with Preserved Meyer Lemon Brown Butter & Sauteed Ramp Greens
Serves 4
2 skate wings, skinned and cleaned
Wondra flour
1/2 preserved lemon, pulp removed (and reserved), rind finely diced
4 T unsalted butter
2 T capers
Olive oil
Sea salt
Fresh ground black pepper
1 T minced parsley
For ramps
1 bunch ramps, greens removed and roughly chopped, bulbs split in half
1 clove garlic, minced
3 T olive oil
Sea salt
Fresh ground black pepper
Start the recipe by cooking the ramp bulbs.  To achieve a golden, crispy exterior on the cut side while leaving the remainder of the bulb soft and almost melted takes a but of time.  Heat up a cast iron skillet over medium heat.  Allow the pan to get hot, the swirl in about 2 T of olive oil.  Place the bulbs in, cut side down, turn the heat to low, and allow to cook for at least 25 minutes, or until the bulb is soft, and caramelized.  You can keep the bulbs in this pan until you're ready to plate. 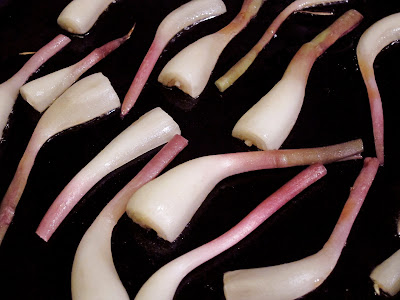 For the ramp greens,  heat a tablespoon of olive oil over medium heat in a saute pant with a cover.  Add the minced garlic, and allow to cook until softened.  Turn the heat to low, stir in the ramp greens, sprinkle with a pinch of salt and a couple grinds of pepper and stir.  Cover the pan and allow these to slowly cook until the greens are wilted.  Remove from heat and keep warm until ready to plate. 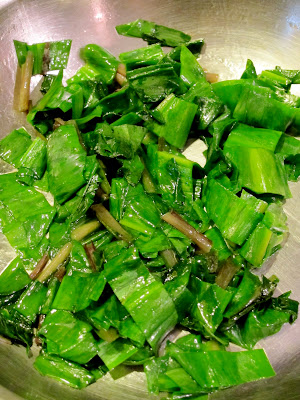 For the skate, pat each wing dry and sprinkle both sides with a couple pinches of sea salt and a few grinds of black pepper.  Once both sides are seasoned, lightly dust the entire wing with Wondra flour.  Technically speaking, Wondra flour is a granulated, instant dissolving flour - originally used just for pastries, sauces, and to help people who inevitably get lumps in their gravy when using real flour.  Fortunately for cooking, Wondra 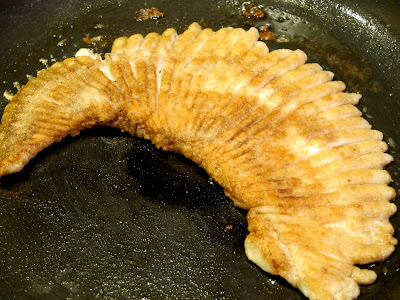 When all the skate wings are cooked, squeeze the lemon pulp into the pan, toss the preserved lemon rind in, and allow them to lightly brown, stirring often and scraping up any bits from the bottom of the pan. After about two minutes, place 3 T butter into the same pan, and turn the heat down to low.  Allow the butter to melt completely, stirring occasionally and start to keep a close eye on it.  Once the foam from the melted butter subsided, you'll see the milk solids settle towards on the bottom.  These will start to brown, slowly, coloring the butter, and giving off an amazing nutty aroma.  When the solids are golden brown in color, stir in the capers, and remove the pan from heat so the butter doesn't burn.
To plate, divide the sauteed ramp greens evenly among 4 plates.  Next, place 1/2 of a skate wing atop the mixture, and garnish with 2-3 ramp bulbs.  Spoon the warm browned butter over each skate wing, ensuring that each plate gets a nice amount of preserved lemon and capers as well.  Give a final sprinkling of minced parsley, and you're ready to eat!
Skate of epic proportions!  This preparation of skate with brown butter really is classic - well, classic while I took the liberty of making a few changes with the preserved lemon.  And there's a reason for that.  The skate wing is so delicate in flavor that it hardly needs more than a little brown butter to transform it.  The ramp greens and bulb are both delicate in flavor as well, and the slow cooking took any inkling of pungency out, leaving us with something that is actually slightly sweet. 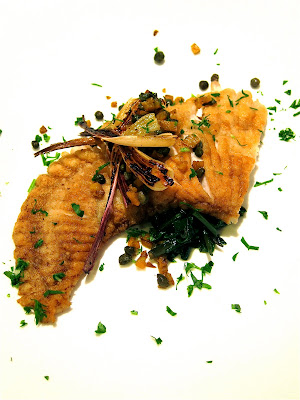 The skate wing truly takes well to a quick saute - it leaves the flesh pillowy soft and flaky, so tender that you needn't do much more than lightly tug to create the perfect bite.  It's texture is similar to that of crab meat, and it's flavor is sweet and almost buttery - hence the perfect combination with the acidic lemon, salty capers, and ramps.
Email Post
Labels: brown butter capers fishmonger greens preserved lemons ramps ray seafood skate
Location: Farmington, MI 48334, USA