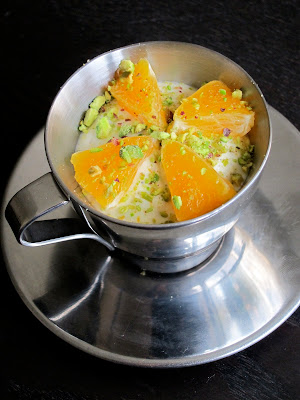 I'll admit it.  I have a new food crush. It's not like I try to creep around and find it's whereabouts, but I'm always a little bit extra excited when I see it on the menu.  Luck? Serendipity? Coincidence? No one knows.  What is it, you ask? Cardamom.  Yes, I said it.  Nothing new, I know - cultures have been using this lovely little guy for aeons, but I've been able to experience it with a bit of an ambush makeover.  More often than not, cardamom is the aggressive, punk rock spice.  It's always trolling around with it's other muscle-y friends such as cumin, mustard seed, curry, or anise. Sometimes, cardamom will take the edge off and get together with cinnamon, allspice, and ginger for some delicious wintertime desserts.  That being said, cardamom rarely - at least in our culture - had the chance to shine on it's own.  Never was it overshadowed, but instead was combined to play the whole power in numbers game. 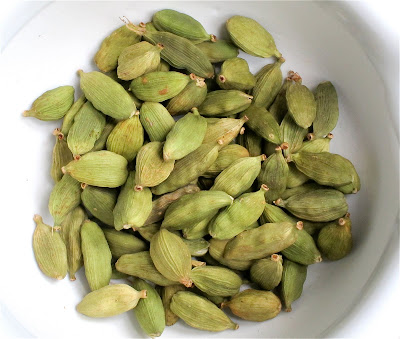 I suppose this is for good reason - cardamom is one of the most expensive spices in the world behind saffron and vanilla.  The harvesting process is very labor intensive, but as with anything in that category, well worth the wait.  Recently, I experienced the haunting aroma of gahwa wafting through the hallways at work.  Why did I not know about this? In Arabic cultures, it is traditional to serve cardamom-scented coffee to honorable guests and royalty.  This was something new to me, and definitely something I will be looking into to recreate at home!  Being part of the ginger family, it's clear to see why it has such an intense flavor and aroma.  But take heed, when purchasing cardamom, buy the entire pod! The little seeds inside are toasted, then ground fresh for recipes.  (I have made pickled chanterelles using the whole pod though - notes on that later) So many of of the volatile oils that make this spice so special will be lost (very quickly) if purchasing it pre-ground.  But, if you must, try to buy the smallest package possible.
Needless to say, I'm excited.  Mostly, I'm excited about the dishes I've been able to try that allow cardamom to shine without being overpowered by other flavors.  Rice pudding with a dash of cardamom, cardamom kulfi, light biscuits with a hint of cardamom.  Each of these had the perfect amount of cardamom - just enough to allow the flavor and warming properties to come through, but with a gentle enough had that the dishes were still delicate.  That being said, I wanted to create a similar dish at home.
Cardamom-Scented Panna Cotta with Pistachios & Orange
1 1/2 teaspoons unflavored gelatin (I use Knox)
1 T water
1 cup skim milk
1/3 cup sugar
1 cup low-fat buttermilk
1 c fat-free plain Greek yogurt
1/2 to 1 t cardamom, or more if you wish
4 T toasted pistachios, chopped
4 T honey
1 large navel orange 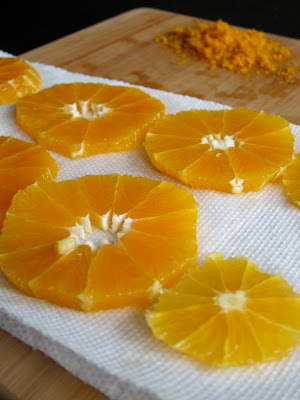 To start, grate the zest of the orange to measure about 2 teaspoons.  Reserve the orange for later.  Next, mix the gelatin with the water in a small bowl and let it stand until softened, about 5 minutes. In a small, heavy-bottomed saucepan, simmer the milk with the sugar over low heat, stirring often.  Cook until all of the sugar has dissolved - about 1 minute.  Remove this from the heat and stir in the softened gelatin, ensuring that it has all dissolved.
In a medium bowl, whisk the buttermilk, yogurt, cardamom, and orange zest until combined.  This is the point where you have to do a little but of taste testing if you're concerned about the cardamom! You can add in the 1/2 t first, and continue until you think the combination is perfect.  Just remember that you will be adding more liquid to the mixture next!   When you've finally got your combination down, whisk in the warm milk until smooth.  Pour this mixture into six 4-oz ramekins, small cups, or even espresso cups and refrigerate until set, about 3 hours.
Prior to serving, take the reserve orange and remove the remaining peel and pith, as though you're about to supreme the orange.   Next, slice it crosswise into about 1/4 inch rounds.  Set these on a paper towel to drain until ready to serve.  I took apart the smaller segments on each of the rounds, but it's not necessary!
To assemble, arrange an orange slice or a few segments over top of each panna cotta.  Sprinkle with the chopped pistachios and drizzle a bit of honey over top and serve!
Everyone loves this dessert, seriously.  It's super light - unlike a "real" panna cotta - and the cardamom just takes the flavors to the next level.  Since the dessert is chilled, it's a nice juxtaposition to have a warming spice added to the mix.  The pistachios add a nice crunch, while the orange brightens it up just a bit.  Altogether, it's a flavor combination that you can't beat! This dish has just validated my crush for cardamom...and I see more dates in the future!
Email Post
Labels: cardamom dessert greek yogurt healthy milk orange panna cotta pistachio spice

Anonymous said…
The cardamon most xpensive spice in the world that boost sex drive
March 29, 2013 at 11:06 PM