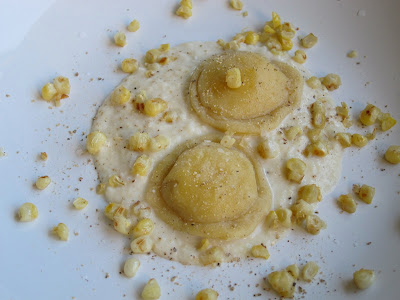 There's not much like the taste of sweet corn picked right off the stalk - so sweet that you hardly need to cook it. The kernels are bursting with flavor and truly are the epitome of summer.  Summer always brings memories of sitting on the porch by the lake, shucking corn...and that pesky silk always causes problems!  You can eat it fresh, roasted, grilled, or blanched (among other techniques), and it's just as good performing solo as it is combined with other late summer ingredients.  And as much as I love corn all by itself, I was taught how to make a particular corn dish by Lee Hefter of Wolfgang Puck Fine Dining Group that blows my mind - sweet corn agnolotti. Granted Wolfie's version is a bit more cream and cheese laden, and also shaved white truffles over the top (much more decadent!), but this take on the dish is equally delicious! On another note, has anyone ever used an industrial pasta machine? I'm talking wing-span size, electric rollers (that move too quickly!), behemoth of a machine. Terrifying. Slightly terrifying.
Industrial pasta rolling machine or not, I urge you to try this before corn falls off the face of the universe (for the summer).  Share it with your family, and share it with your friends - you'll love the reactions you get!
*If you don't have time to make the pasta, you can use wonton skins - fresh pasta just has a nice toothiness to it! 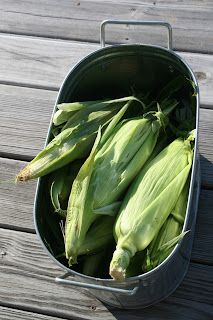 Sweet Corn Agnolotti with Sweet Corn Puree
Corn filling, recipe follows
Pasta dough, recipe follows
Wondra flour
1 egg, whisked with 1 t water for egg wash
Sweet Corn Puree, recipe follows
Sea Salt
Fresh ground black pepper
Truffle oil - if you're ambitious.
Corn kernels, barely sauteed, for garnish
To make the agnolotti, roll out the pasta dough until it is just thin enough to see through it.  You can either use a pasta roller, or if you're like me and fail to remember that you don't own said pasta rolling machine, bring out the trusty rolling pin.  Section your dough into smaller portions for easier rolling.  With the machine, place the rollers at the widest setting.  Run the dough through the machine, fold it in half, and run through again.  Repeat three times.  Continue this process, reducing the setting by one notch each time, without folding the dough over on itself.  If rolling by hand, sprinkle your surface with flour and basically have at it, pressing down firmly.  Rotate the pasta 90 degrees every so often until the dough is paper thing.  For the agnolotti, I cut the rolled dough into long rectangular strips.
Now it's time to form the agnolotti! There are a few ways of doing this:
1) Pipe out 1 t mounds of the filling out on the pasta, about a 1.5 inches apart. Ensure that there is enough pasta dough above the filling so it can be folded over.  Brush around the filling with the egg wash, and fold the pasta over, making sure not to trap any air inside, and finally pressing down around the filling to seal each agnolotti.  Dust with Wondra flour and cut the angolotti using either a 1-in ring mold or a serrated cutter.  Finally, place each agnolotti on a parchment paper lined baking sheet.
2) You can use an old-fashioned ravioli mold - this actually works nicely for this recipe, allowing each agnolotti to retain slightly more filling than the above method.
3) Be as labor intensive as possible, "creating" an individual mold by using a 1/2 T measuring spoon.  Although they had to be made one by one, the results were beautiful!
However you want to do it is fine.  These agnolotti can be made ahead and even frozen! 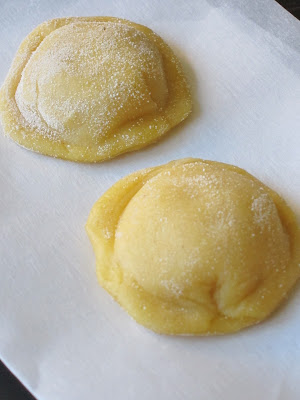 When ready to cook, bring a large pot of salted water to a boil and reheat the sweet corn puree for plating in a separate saucepan.  For this dish, it's important to coordinate all your pans! As soon as your drop in the agnolotti, you should be sauteing the corn kernels - both cook very quickly.  When the water is at a rapid boil, gently drop in the agnolotti - how many depends on if you're serving this as an appetizer or an entree - but it's up to you! They are crazy delicious, so the more the merrier. When the agnolotti pop back up to the surface of the pot, let them cook for only about 20 seconds longer, remove, and lightly drain.
On each plate, spoon and thinly spread out a bit of the corn puree. Divide the agnolotti and corn kernels evenly amongst the plates.  Finally sprinkle with a little sea salt and a crack of fresh black pepper.  To kick this up another notch, finish with a bit of truffle oil. Serve immediately!
This is SUCH a delicious dish and the flavors are so simple.  As much as I love barely cooked corn, this dish and it's ingredients truly help to bring out the sweet flavor of corn.  The filling and corn puree are equally delicious on their own as well.  So run out, get some ears of corn, and make this - I promise you won't be disappointed!
Corn Filling
1/2 cup cream
4 ears of corn, kernels grated on a box grater ~2 cups)
1 t salt
1/4 t fresh ground black pepper
1/8 cup grated Parmesan
Bring the cream to a boil, being sure not to scald it.  Reduce to 1/3 cup, then stir in the corn kernels, salt, and pepper.  Allow this mixture to come to a boil, stirring constantly. Cook until the mixture reduces enough to coat the back of a spoon.  Remove the mixture from heat and stir in the cheese. Place in the refrigerator and allow to cool and set.
Pasta Dough
about 1/2 lb
4 large egg yolks
1.5 t water
1/2 cup plus 1 T all-purpose flour, or as needed
1/2 teaspoon fine sea salt
1 T olive oil
One thing about making fresh pasta - it's very temperamental! How much of each component you need really depends on the weather, humidity, the exact type of flour you're using, etc.  You really have to use your sense of touch for this!
To make the pasta, you can either use a stand mixer with a dough hook, a food processor, or just do it by hand using the ole well-and-swirl technique.  Since I don't have nearly enough counter space to do it the old way (unfortunately!) I resorted to using the food processor.  Frankly, it is a bit easier and it all comes together much more quickly.  With either mixer, combine all the ingredients and pulse until the dough starts to pull away from the side of the bowl.  If it's too dry, add another egg yolk - or even an egg white.  If too wet, add more flour in small amounts.  Remove from the bowl and knead for about 15 minutes until smooth and elastic.  Wrap in plastic wrap and let it rest for at least 20 minutes.
Sweet Corn Puree
2 T butter
1 cup fresh corn kernels
1/4 cup chicken stock
1/4 cup cream
In a sauce pan over medium-low heat, melt the butter.  Add in the kernels and allow them to cook for just a minute.  Stir in the liquids and bring the mixture to a boil - cook for about 5 minutes.  Transfer the mixture to a blender or food processor, and puree until smooth.  For an extra smooth puree, pass it through a sieve.  Reserve for later.
Email Post
Labels: agnolotti cob corn kernels parmesan puree ravioli summer sweet pea truffle

Maia Dobson said…
Sweet corns that are freshly harvested are so delicious! Your recipe looks so yummy and it's kinda unique. I think I'll add popcorn to that when I do it at home because my dad bought some popcorn machines for sale. We love popcorn and it's funny how we add popcorn on almost all our snack recipes.
May 31, 2012 at 2:37 AM