chestnuts roasting on an open fire

Well, it's been quite some time since I've posted any recipes! I hope everyone had a lovely Thanksgiving and was able to celebrate with friends and family. Mine came to visit and we spent the majority of the time doing what we do best - cooking and eating!  That being said, I've got a great recipe for those of you that are tired of turkey leftovers! I know November has been hoodwinking and playing a lot of tomfoolery lately - 70 degrees? Flip flops? Shorts?  This results in mind tricks and makes me want to cook all summery like, but the weather can't fool me - I know December is around the corner, so I'm sticking with Fall flavors.  Sage chicken with chestnuts, onions and prunes - an epic combination!  Speaking of mind tricks - this recipe is killer.  It's got so much flavor, you're bound to think there's tons of butter and other secret ingredients, and no one will believe how simple it is! Beyond that, I recommend you make the chestnut dish times 5 - you won't be able to stop eating it!
Sage Chicken
4 chicken breast halves, skinned and boned
4 t olive or vegetable oil
2-3 garlic cloves, minced
4 T sage, chopped
½ cup white wine
½ cup chicken or turkey stock
Salt
Fresh ground black pepper

Heat the oil over medium heat in a large skillet – big enough to hold all of the chicken breasts without crowding them.   When the oil is shimmering, sauté the garlic for about 30 seconds,  stir in about 3 T of sage, and place each chicken breast in the pan skin-side down (or what was previously the skin side!).    Allow the chicken to cook for about 5 minutes and until it is golden brown, then flip.  Cook for approximately 5 minutes more.  The chicken shouldn’t take much longer, but it depends on the thickness – just be sure not to cook it too long, or it’ll become ridiculously dry!  Cut into the thickest part of one of the breasts to see if it is no longer pink, and remove from the pan.  The chicken will continue to cook a bit while you let it rest out of the pan.

Deglaze the pan with white wine, scraping up all of the brown bits on the bottom.  Bring to a boil and let the wine almost completely reduce.  Next add in the chicken stock and remaining sage, reducing until it has a thick, sauce like consistency – thick enough to coat the back of a spoon.  Taste the sauce for seasoning – it shouldn’t need much – and spoon over the chicken breasts.

Serve with the chestnuts and prunes, with a little extra sage as garnish and enjoy! You can even get pyro like me, and LIGHT your sage on fire for a little extra pizazz. 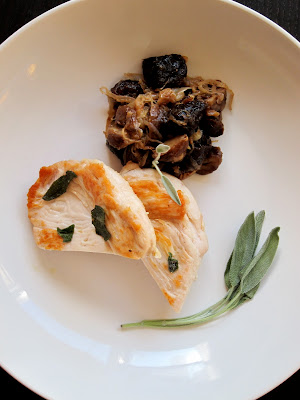 Chestnuts, Onions and Prunes - Half of this recipe is enough for two plus some leftover...but it's amazing so you might as well make it all!

Let's be honest - chestnuts are kind of a pain in the behind to cook.  Fortunately, the pre-cooked varieties are just as good - but if you really want to cook them fresh, more power to you! I get mine from Trader Joe's - they're already cooked (steamed and peeled), and perfect at that!  But - if I lived in Italy, I would just get them from THIS GUY: 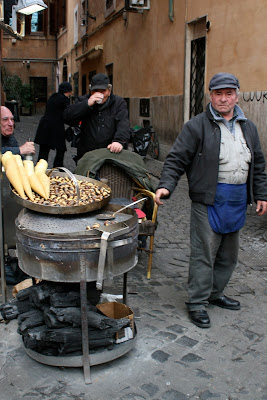 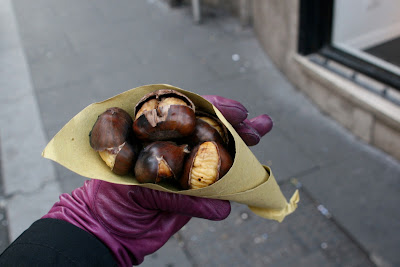 And I love them. 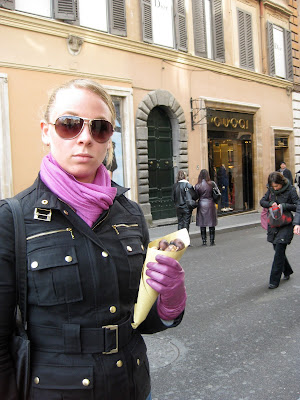 Meanwhile, sauté the onions in the oil (or butter, if you're getting down) in a pan until caramelized and golden (slow and low – the longer the better!).  Season with salt and fresh ground pepper to taste, and stir in the lemon juice and cinnamon to combine.  Add the chestnuts and prunes, cooking for 5 minutes more – serve warm, or at room temperature.  This can be done ahead and reheated in the oven as well! 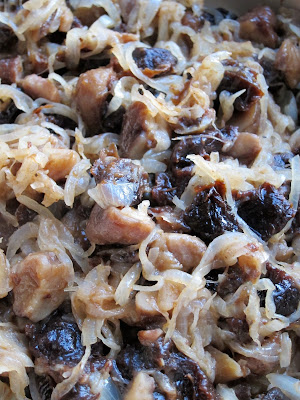 Seriously, YUM.  The chestnut dish is honest to god epic  - all of the flavors come together perfectly to make magical little bites, and it's great texturally! You get a little bit of toothiness from the chestnuts, and the rest is almost velvety.  Add in a taste of perfectly cooked sage chicken with the depth of flavor from the pan sauce, and next thing you know, you're stuck in a swirling montage of open hearth fires, snowflakes, Bing Crosby, and Christmas trees. Is that PC? I don't know, but it's worth every bite. 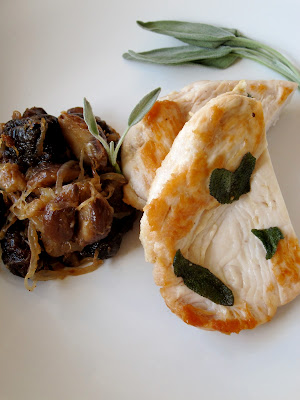