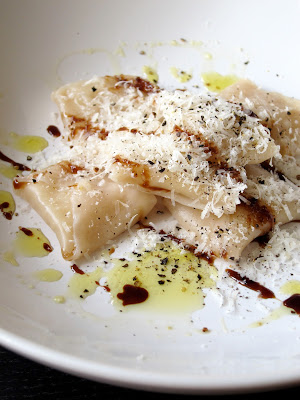 It seems like the only thing I'm seeing at the market these days are squashes, root vegetables, and pome fruits - but I guess it is that time of year.  Seriously, I can't get away from them.  As soon as I walk into ANYWHERE food oriented, I see bushels of apples, baskets of squashes, and roots up the wazoo.  But, at least we're lucky enough to have ten billion varieties to choose from! Speaking of pome fruits, I was a bit in the mood to do something with pears. Pear salad? Maybe.  Poached pears for dessert? In time.  Pear ravioli? YES.  Sounds strange, eh? Well, let me tell you - it is absolutely delicious.  I had it for the first time in Florence at Trattoria dei Quattro Leoni, and then probably a thousand places thereafter since I became mildly obsessed.  And I haven't had them since.  Of course, any time I get something in my head, I have to make it happen, lest I lose my mind (moreso than I already have, of course). The pear ravioli at 4 Leoni was definitely decadent - it was made with taleggio, and served with a thick, cream-based sauce and asparagus.  While someday I'll recreate this, I wanted something a bit on the lighter side. So off I went! 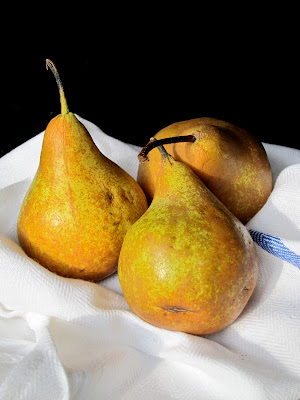 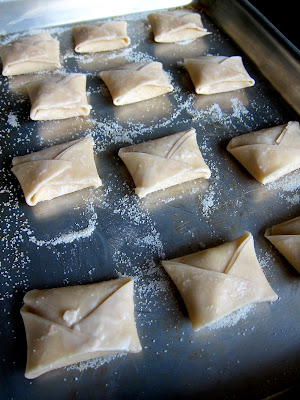 Ok, first off, let's talk pears.  As above, I used Bosc, but you are more than welcome to use whatever kind of pear you like, as long as it's not too firm, and not too soft - just right! And, as far as mascarpone goes, I know that 1 T is not much, especially considering it generally comes in packages of 8 oz. or more.  You realistically COULD use cream cheese if you want.  Mascarpone is a tad bit sweeter, but hey.  Just sayin'.  Moving on: grate both of the pears, and combine them with the young pecorino and mascarpone cheese in a bowl.  Stir to combine.  Next, roll out your pasta dough - or separate some wonton skins and get ready to make some goodies! At this point, you can make your filled pasta into any shape you want - agnolotti, ravioli, mezzaluna, tortellini - whatever tickles your fancy! I decided to make mine into little "love letter" envelopes - easy enough!  Sprinkle a pan with a little cornmeal to arrange your little packages and to keep them from sticking.  Place about a teaspoon of the filling into each, making sure all of the edges are sealed properly.  When you're through assembling, either cook right away, refrigerate for later, or freeze for REALLY later.  I suggest you start boiling water ASAP. 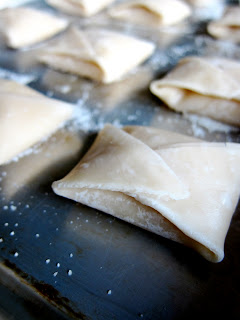 Bring a pot of salted water to a boil.  When it's at a full roll, drop in your ravioli.  They should be done when they float back up to the top! For plating, I first tossed the warm raviolis in a small, separate bowl with some grated pecorino to distribute the exterior cheesy goodness. Next, in a shallow bowl, or plate, evenly divide the cooked raviolis. 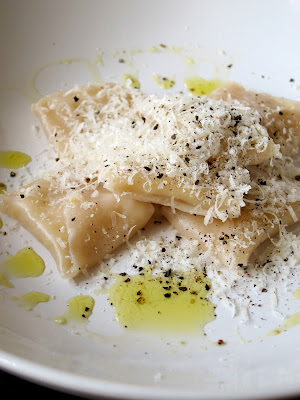 Finish each plate with a hefty amount of grated pecorino, large quantities of black pepper, a drizzle of good olive oil, and a nice little sprinkling of good sea salt flakes.  If you really want to take it to the next level, drizzle the finished dish with a little saba or aged balsamic.  SERIOUS next level! 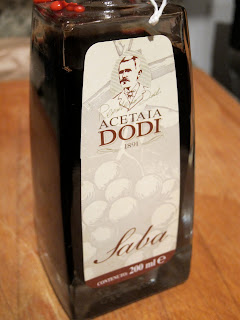 These. Are. Amazing! They were everything I wanted in a pear ravioli, yet still somewhat healthy...for pasta.  I'm sure these would be equally as delicious if they were finished with a butter or cream sauce, but the olive oil drizzle really let the main ingredient shine.   It was a perfect combination of tastes - a bit salty (and umami-ness!) from the pecorinos, followed by a sweetness from the pears.  The black pepper gave it a bit of a bite, and the drizzle of saba really smoothed the whole dish out.  Serve this as a first course, and your friends will love you forever! 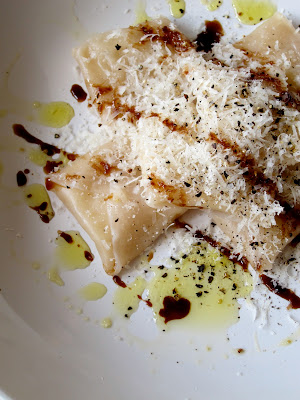