a final note on spring. 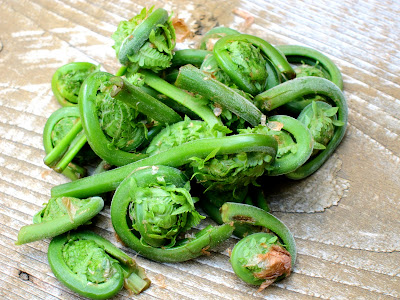 June is upon us, and although the weather may make you think otherwise, summertime is creeping upon us. The grass is green, the humidity is creeping, markets are attempting to sell not-yet-ready corn and tomatoes, and Saturday street fairs are starting to take over the city.  So I needed to give Spring one last hurrah before we bid it adieu until next year.  With that, I give you fiddlehead ferns - violin scrolls if you will - fern fronds.  One of the quintessential signs of spring that, like most in that category, are really only around for a short period of time - so you have to get them while you can.  Furthermore, fiddleheads also have that lovely spring classification of being wild - like ramps and morels.  I assure you, nowhere to be found is the lowly fiddlehead fern farmer.

I had arrived home for a short stint, just to find the elements of spring just peeking out - Michigan had a cold winter, and a late Spring.  By the time I left after three days, with a bit of sunshine, the land was bountiful! The grass had grown and was perfectly green, the lilacs and lilies of the valley were both budding - just waiting for the perfect moment to bloom.  Our ferns were just beginning to peak out and unfurl - so it seems I was in the right place, at the right time.  So, with family looking at me as though I was crazy (when don't they), I began to get down low to the ground, and pick a few handfuls of fronds - tightly curled, with an inch or so of a straight base.  With fronds in tow in my kitchen towel, I headed to the back deck to begin prepping the ferns.  It doesn't take much - just ensuring that the brown paper-like material (similar to what you find on peanuts) that covers the frond and its leaves is taken off as much as possible, as well as removing any dirt. 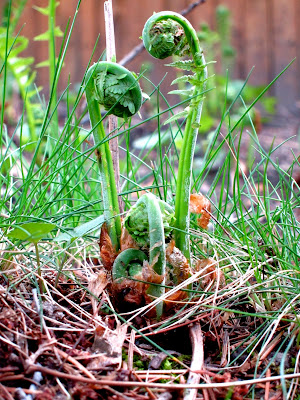 Again, as you all may know, I am quite a purist when it comes to ingredients like these.  Since they are such a delicacy, and often hard to find, I want to be able to really enjoy and preserve the texture, identity, and pure flavor of such an item. With that being said, a straightforward preparation was in store.

First, blanch the ferns.  Bring a large pot of water to boil over high heat.  While the water is heating up, prepare an ice bath for the ferns.  Once the water has come to a rapid boil, add in the ferns and cook for about 2-4 minutes, until JUST fork tender but still a bit al dente.  Immediately drain and transfer to the ice bath to stop the cooking and preserve their bright green color. As soon as they are no longer warm, remove the ferns from the ice bath, let drain on a paper towel, and set aside.

To prepare the beurre noisette (really, the French way of saying brown butter), gently melt the butter over low heat in a saute pan.  When the butter has melted, you will see that it has separated into milk solids and pure, clarified butter.  Allow the butter to continue to cook, until the solids have turned a nice brown color and has a nutty, rich scent to it.  Remove from heat, and gently toss in the drained fiddlehead ferns.  Once they have been evenly coated, sprinkle with a bit of salt and pepper to taste and transfer to another bowl.  If you like, you can sprinkle some freshly grated Parmesan over top as well - I used a microplane to achieve a very fine grate that would melt quickly and not be much of a distraction from the ferns themselves. 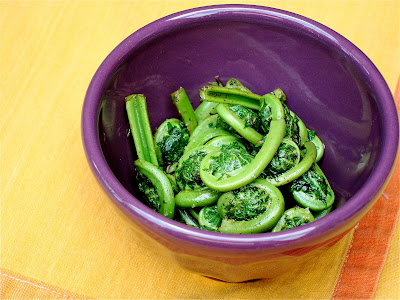 And what a beautiful and delicious preparation this was.  Again, my family looked at me like I just escaped from the loony bin when I came out with a bowl of the fiddleheads.  "Here everyone, try one - just use your fingers." Blank stares.  Confusion.  "Didn't you JUST get those from the ground a few minutes ago?" - "Can you really eat those?" - so on, and so forth.  I guess not everyone is used to grabbing something from the ground and gobbling it up!  Frankly, I shouldn't have made them taste so I could've been greedy, keeping them all to myself.  The fiddleheads were just al dente, with the ubiquitous flavors of springtime and freshness.  They truly tasted of the earth, with a flavor that can only be described as green.  They had the flavor of fresh-cut grass, with a hints of something similar to asparagus.  They carry a mild nutty flavor on their own, so the beurre noisette simply brought out that component.  The salt helped bring out the flavors, while the pepper and Parmesan created a bit of warmth and savoriness in the dish. 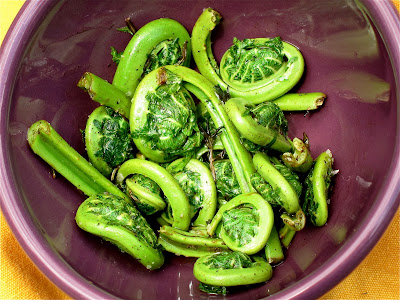 And let me tell you, they were like Pringles.  Once you pop, the fun don't stop.  I had to constantly shift the bowl around the table, from corner to corner, so whomever was sitting there wouldn't eat them all up.  It was a truly tasty snack, and a perfect way to finalize my springtime ingredient enthusiasm.  These "scrolls" were gone within the next couple of weeks - matured into fully fanned-out ferns, with not an inkling of edibility.  I can't wait for next year!