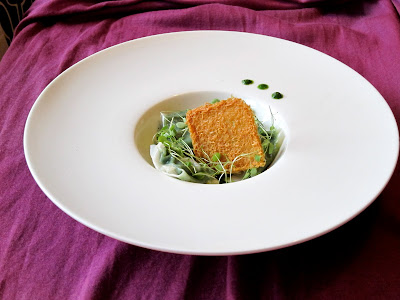 Yes, I am borrowing a phrase coined for the one any only Cassius Clay, but alas I will not be speaking of boxing.  Instead, we will be discussing stinging nettle ravioli - continuing our lesson in spring goods! Stinging nettle is a fantastic edible weed - beside the fact that IT CAN STING YOU! I fortunately have never been stung by any of nature's wildlife/botanicals, nor do I plan on it.  I did briefly touch a leaf, but not long enough (not because I was intimidated by a plant or anything..) to feel any stinging. So, when you see stinging nettle, even in the market, don't touch it! But do buy it.  How can you eat something that you can't even touch, you ask? A simple task - the blanch! It rids the nettle of all it's stinging glory, reducing it's power down to well - just a delicious green really.  It is very similar to spinach in it's flavor, as well as how good it is for you - so really, you can take any simple spinach recipe, and kick it up with stinging nettle!
So today, I decided to make a nice little spring tortellini - I had some AMAZING fresh chevre from Ardith Mae (my favorite), this crazy bunch of nettles, micro watercress, and some ramps (good looking ones!), so it was an obvious route to take in my kitchen.  Now, mind you, I did not make fresh pasta (would've been better), but I DID have some great, paper thin wonton skins in the fridge (works well in a pinch!) that I used instead.  And remember, as with any recipe, the flavoring all depends on the potency of your ingredients, but especially with one that involves an ingredient like chevre - so taste for seasoning and add different herbs to your liking!
Cassius Clay Tortellini with Puree of Ramps and Parmesan Crisp
For the tortellini:
2 cups stinging nettle, washed (put gloves on or just use tongs!!)
1/2 cup fresh chevre cheese
1/2 t salt
1/4 t white pepper (plus more to salt the water)
1/4 t black pepper
A pinch of ground nutmeg
1 T orange zest
Wonton skins, or fresh pasta rolled out and ready for some filling
Ramp Puree
1 bunch of ramps, chopped with roots and green leaves removed (save them!)
1 T olive oil
Salt, to your liking
Parmesan Crisps
1/2 cup finely grated parmesan
To begin, make your nettle filling and prep the tortellini - they can be refrigerated until you are ready to use them.  Bring a large pot of water to a boil, with about 1 T of salt.  While you're waiting for the water to boil, prepare an ice bath for the nettles after blanching.  Once the water has come to a boil, place the nettles (with tongs!) into the water.  Cook for a few minutes, allowing the water to come BACK to a boil.  Let cook for about 20 more seconds, then transfer to the ice bath.  Let the nettles cool down, and drain on a paper towel.  Note! Don't turn of the water just yet! You want to blanch the leaves from your ramps! These will only take a few seconds to cook, because they are delicate enough as it is.  Throw them in, and follow the same steps as the nettles.
IMPORTANT SIDEBAR! Did you know the remaining liquid after boiling greens actually has a name? Yes, it does. Potlikker. Originated down south and has roots with soul food.  After boiling collards, mustard greens, kale, you name it - the potlikker was consumed because of its high concentration of Vitamin K, C, and Iron. Love it!
Ok, back to real time and on to the filling.  To make life easier, you could use a food processor, but I find in a mixture like this that the final seasoning is distributed better by hand mixing - to each her own though!  I did use the food processor to puree the nettles and the chevre together, then switched over to hand mixing.  The resulting puree came out velvety, creamy, and a beautiful shade of green.  Whichever method you choose, mix the remaining ingredients together and give it a taste - if you deem the mixture needs more nutmeg - go for it.  Crazy about orange? Zest it in!
Now is time to assemble the tortellini.  Set a bowl of warm water near your workspace - your wonton glue.  With one wonton skin in the palm of your hand, place about 1/2 teaspoon of the mixture in the center, to start - the size really depends on the size of the wonton skins.  Just make sure that none of the mixture squeezes out of the side when  forming the shape.  Wet the outer edges of the wonton after dipping your fingers in the water, and close it up, forming a triangle. Be sure to gently squeeze out any air bubbles that may be trapped inside - you want ONLY for there to be filling well...as the filling. Next wrap the wonton around the tip of your finger (like its hugging you!) and press the edges together once again, folding down the top flap as a final step.  If it's easier, you can simply fold these into little envelopes as well.  Once you've finished with all of the filling (or at least filling as many tortellinis as you need for you dish!), set the tortellini on a sheet pan with parchment paper. 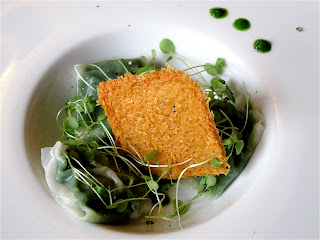 Now for the ramp puree - truly simple! Ramps have such a delicate flavor that this literally is just ramps...pureed. Heat up about 1 T of olive oil in a saute pan over medium heat.  Once the oil is shimmering, add in the chopped white section of the ramps and sweat.  Cook these until they are just starting to take on a nice golden color.  Transfer all of the ramp components to a blender, food processor, mortar, or heck just use a stick blender.  Whip it all up until smooth, drizzling in a bit of olive oil if necessary.  If you're ambitious, you can pass this through a sieve.  To keep the puree warm, you can either put it in a small sauce pan over heat, or utilize a double boiler-esque technique.  Set the mixture aside until you're ready to plate. 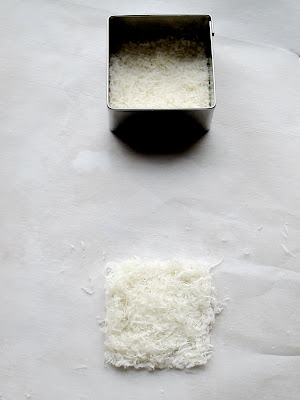 Finally - Preheat the oven to 400F, and bring another pot of water to a boil (you could use that cool ole potlikker if you want!), but if not, add in some more salt.  While the water and oven are both heating up, make your parmesan crisps! On a Silpat or parchment lined baking pan, either place a spoonful of grated parmesan in a mound and press down, or use something to shape the crisps.  I used my handy dandy square mold - but get creative! Want to make a heart shaped crisp? Maybe a cowboy boot or Texas shaped crisp? Go for it - I might even start using random cookie cutters for things like this come to think of it! Place the pan in the oven and cook for 3-5 minutes until golden and crisp.  Allow to cool and carefully remove them from the pan.  When your water has come to a boil, gently place the wontons into the water - these should only take a minute since the only thing that needs to cook is the skin! Because of that, make sure you're ready to go - sauce in hand, or even already in your dishes.  Once the tortellini float back up to the top (hence "float like a butterfly" - now it makes sense!), remove and place them either into your reserved puree (gently toss), or into your serving dishes.  Place the parmesan crisp on your plate and dress with a few microgreens (if you have them!). You could even go so far as to zest even MORE orange, crack some black pepper, and maybe sprinkle some fennel pollen over top, if you so desire. Serve immediately!! 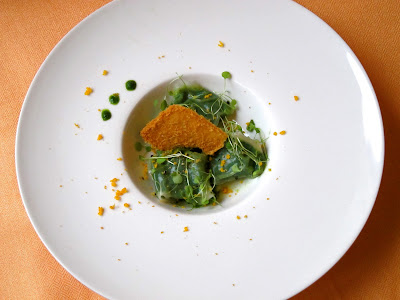 Simply. Heavenly. All the flavors in this were very delicate, so nothing really masked the flavors of its companions - they each brought out great qualities of one another.  The nettles and the ramp gave a nice, but subtle earthiness to the dish, while the orange zest really brightened it up.  And the fresh chevre made the tortellini feel like little clouds.  Most importantly, the dish was striking.  The puree and the filling of the tortellini had a gorgeous emerald hue.  So, if you see nettles around, pick some up (NOT LITERALLY!) and give these a shot - you won't regret it. 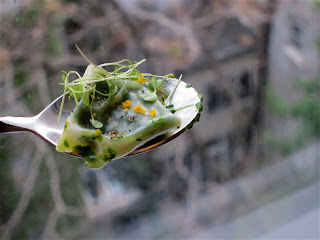