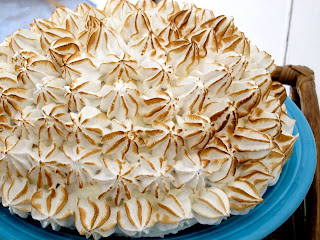 Saturday was Judgement Day.  I know, it was The Day of Rapture - but this was even more serious.  (Besides, the only Rapture I get caught up in is when Anita Baker is involved.) Silently duking it out with Entertainer Extraordinaire, Queen to many a party, chef to the celebration- MY MOTHER.
*insert ominous doomsday sounds*
I was throwing my mother a surprise 60th birthday party. In her own house. With all of her friends that have witnessed the previous parties to end all parties in the same "event space".  My party didn't involve any bands or Motown groups, and lord knows I didn't have any servers in tuxedo shirts and bow-ties.  Have mercy, what was I thinking! Plans had been grinding away since February.  Invitations created, menu set, broken down, and set again.  Excel spreadsheets. Endless shopping lists. Party rentals.  Timetables. There was no turning back! And, of course, I took it upon myself to cook all of the food. With delight. The only problem was keeping it a secret.  But how can one be sneaky when you're dealing with the sneakiest woman on Earth? WELL. Two can play that game, and sneakiness of epic proportions unfolded over the course of four months.  Everyone was in on the game - except Delta, who tried to foil all of my plans by e-mailing my mother my flight plans. You hear that Delta? You almost blew it. Epic. Fail. 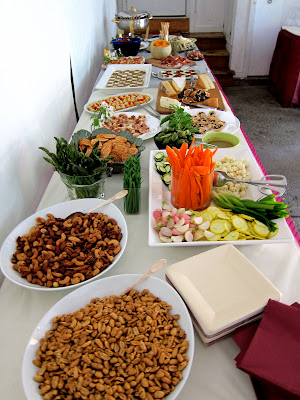 Either way, things worked out perfectly.  But it seemed like everyone was trying to raise my blood pressure, point by point. Timing was spot on, to the minute, almost frighteningly so.  I was able to sneak my mom out of the house JUST before our chafing dishes, glasses, and tables were delivered.  My dad was able to intercept every package before the mom could get to them - we all know she would've opened them, even though they have her ADULT CHILDREN'S NAMES ON THEM.  No food disasters. And everything was set and assembled literally thirty seconds before the first guests arrived - I had just enough time to change out of my whites and into a sundress.  Oh, by the way, Day of Judgement, thank you for raining for the entire week ahead of time, but being kind enough to part the clouds and have a beautiful, 77-degree, slightly breezy, cloudless day. 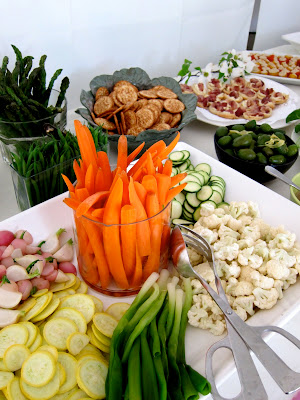 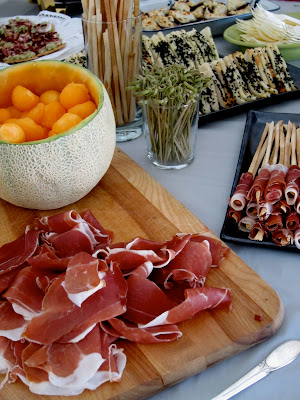 Needless to say, everyone was happy.  And the food was good! Crudite with bagna cauda, cherry tomatoes filled with a sage white bean puree, pissaladiere, a nice little cheese platter, billions of gougeres (I LOVE GOUGERES!), standard prosciutto di Parma with cantaloupe and grissini, random canapes, lamb persillade, and tea sandwiches, among other things.  (And I was afraid I wouldn't have enough food). The magnum of 1985 Dom Perignon Brut Rose that a friend brought wasn't a bad addition either. 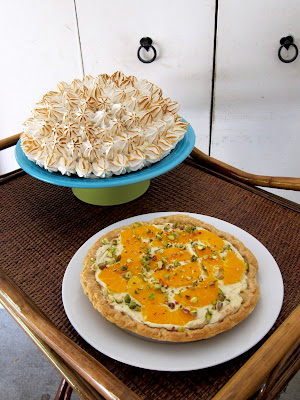 Then the desserts.  A delicious cardamom-orange mascarpone tart.  And an amazingly delicious cake.  Of course, it was Martha Stewart's birthday cake a few years back, so clearly it would be good enough for the mom. An amaretto and almond dome, filled with Swiss meringue buttercream and apricot preserves, piped with little Swiss meringue peaks. Beautiful! Now, this was my biggest test.  Baking is this daunting, exacting science, and we all know I like throwing things around in the kitchen, sans measurements.  I mean, I love baking and making pastries because it makes a heck of a mess, and flour goes all over the place.  But I had one chance to bake this cake, and it was a multiple hour process.  No room for failure! Could I do it? Oh yes, I did. Luckily for me, my godmother gave me Martha's Cake Decorating Kit for my 10th birthday - brimming with icing tips, pastry bags, food coloring, and off-st spatulas.  So I had Martha on my side.
But I was ALMOST defeated, once again.  The final step of browning the meringue almost brought me down.  I knew we had a kitchen blow-torch...somewhere in the kitchen.  Nowhere to be found! Sent dad in the jalopy to Home Depot to buy a new kitchen blowtorch.  Upon return, myself, brother and father couldn't get the thing to work.  Why? No butane! What?! Fortunately, we have an economy size (family size?) blowtorch in the garage, and I'm lucky I didn't burn the house down.  I do love miniature things, but utilizing a giant blowtorch was a lot more personally entertaining than that little pansy, wussy handheld one. So finally, after days and hours, the cake was finished, and beautiful.  And, as I came to find out a few hours later - DELICIOUS!  So, you want to make a cake? Go for this one.  It's definitely a special occasion cake, but fully worth the effort.
Martha's Birthday Cake
(Courtesy MSLO & John Baricelli)
(Not adapted, because it's cake. And you can't mess with cake.)
1 lb. (4 sticks) unsalted butter, and some extra to butter the bowl
3 cups cake flour, plus more for sprinkling
2 t baking powder
2 cups plus 1 T sugar
2 vanilla beans
1 cup whole milk (WHOOPS. I only had skim.  So I mixed skim and whipping cream...don't tell)
8 large egg whites
Pinch of salt
To assemble (refer to the bottom of this post for the recipes!):

Amaretto Simple Syrup
John's Almond Swiss Meringue Buttercream
John's Almond Swiss Meringue
1/2 C apricot jam
First: are you ready? Prepare yourself for flour explosions, and a whole mess of time taken to make, bake and assemble this cake! Preheat the oven to 350F.  Butter the mother out of a stainless steel bowl that's about 10 inches across, and 4-5 inches deep.  Like seriously. Don't be dainty.  If you let this cake bake for it's almost 2 hour time period, and find that the cake BREAKS when you're taking it out, you will be very, very unhappy.  But at least you'll have cake to wallow in your sadness with? Butter ever millimeter of the bowl, then cover each of those millimeters with cake flour.
Next, sift your cake flour and baking powder together into a large bowl.  Totally necessary step - it will get any of those pick clumps out, and it'll make your final cake a perfect consistency. Set aside.  Next, combine the butter and 2 cups of sugar together with an electric mixer (paddle attachment!). Don't cream them yet! Split open your vanilla beans lengthwise and scrape out all those delicious little seeds.  Save the pods - or throw them in with your sugar to make all the grains deliciously and delicately vanilla scented. If you don't have vanilla beans, you can definitely use vanilla extract (GOOD VANILLA EXTRACT, thanks Ina.) - about a teaspoon. Now you can go ahead and cream the ingredients together - beat on medium for about 3 minutes until the mixture is light and fluffy - think Easter-time pale yellow.  With the mixture on low, SLOWLY add the dry and wet ingredients, alternating as you go.  Make sure you start and end with the dry ingredients - this is no joke! Another pertinent step. And be gentle - if you put too much of either in at one time, it will go all over the floor and probably your face too (no experience in that...).  Scrape down the sides when you've added about half the ingredients, and once again before you're through.  If you don't have another bowl for your mixer, put the batter in another bowl and set aside.  Otherwise, set it aside in the same bowl, and place a clean bowl into the mixer to whip the egg whites.
I'm sure you all know, but be really careful when separating your egg whites.  If you get one inkling of yolk into the whites, or a shell, the eggs will be stubborn and not whip, at all.  So, break the eggs one at a time into a cup, and pour each individual egg white into the bowl. Egg whites don't mess around! Once you're ready, beat the egg whites on high with a whisk attachment with a pinch of salt until soft peaks form. Soft peaks = peaks that kind of flop over when you pull out the whisk.  Add 1 T sugar, and beat until glossy peaks form, from 3-5 minutes. Fold a third of this mixture into the batter to lighten it - finally fold in all the remaining whites, GENTLY, so it's light and fluffy.
Pour this mixture into your epically buttered and floured bowl, and cross your fingers.  Bake until golden brown - about an hour and forty minutes, or until an inserted skewer comes out clean.  If the top of your cake is getting to brown while cooking, you can place parchment paper of it.  Once it's ready, allow the cake to cool for five minutes, then (cross fingers again) invert on a wire rack to cool completely.
If you're lucky, the cake will come out looking pristine. To assemble, place the cake on a flat work surface and slowly cut the cake into either 3 layers using a serrated knife.  Place the first, bottom (largest) layer on a cardboard cake round - again, a tiny yet important step! This will make transportation and decorating easier. Brush the bottom layer with the amaretto simple syrup, then coat with about 1/4 inch thick layer of the buttercream.  Top with the next layer, a brush again with simple syrup. Spread a thick layer of apricot jam over this layer and top with either your final layer.  Brush the whole thing with simple syrup, and lightly coat the cake with buttercream.  Finally, pipe the meringue onto the cake with a medium-large star tip (.375-inch) to cover the entire cake.  Using a small torch (or if you're like me, a giant one), lightly brown the meringue all over.  Let the cake stand at room temperature until ready to serve, up to 6 hours. 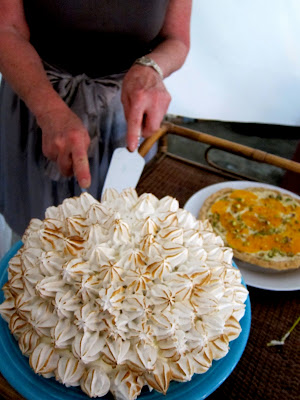 Sounds easy right? It's not so bad, and it's fun to really see the fruits of your labor come out as something so pretty and, yes, scrumptious. So scrumptious that I didn't even get a picture of the cross-section because once someone took the first bite, it disappeared like hot cakes.  Or like cheese in a mouse house.  Or just really good cake.  The cake itself was light and fluffy, with just a hint of almond flavor, and a little brightness with the apricot jam. Perfection.
Amaretto Simple Syrup
1 c water
1 c sugar
Amaretto/Disaronno, to taste
In a saucepan, heat up the sugar and the water, stirring until the sugar has dissolved.  Bring the mixture to a boil, then reduce the heat and simmer for about 5 minutes.  Remove from heat, add in your amaretto, and cool to room temperature.
John's Almond Swiss Meringue Buttercream (makes 4 cups)
5 large egg whites
1 1/4 cups sugar
1 lb (4 sticks) unsalted butter at room temp
1 t almond extract
In the bowl of your electric mixer (make sure it's heatproof!), combine the egg whites and sugar.  With the bowl over a pan of simmering water, whisk the mixture together until the sugar is all dissolved and is hot to the touch.  (This step makes your buttercream nice and shiny!) With the whisk attachment on the electric mixture, mix on low speed, slowly increasing to high speed and whip away until stiff, hyperglossy peaks form - 10 minutes or so.  Next, with the machine on low speed, add the butter to the egg whites, beating until smooth. Finally, add the almond extract mixing until combined and set aside.
John's Almond Swiss Meringue (8 cups)
8 large egg whites
2 cups sugar
1 drop almond extract
Combine all ingredients in another heatproof bowl for the electric mixer and repeat the above steps - whisking, heating, and beating until glossy peaks form.  Transfer this to the pastry bag and pipe away!
Email Post
Labels: almond amaretto anita baker apricot bagna cauda birthday cake canape canteloupe cardamom crudite disaronno martha stewart mascarpone meringue pastry rapture surprise swiss