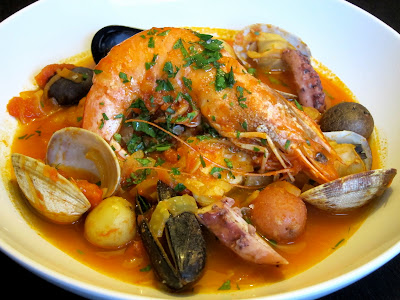 My mind works in strange ways.  The other day, I was planning out my daily excursions with the final destination of "kitchen" to cook dinner, but wasn't quite sure what I wanted to make.  Sure, I could go the old route and see what's good at the market - but instead, I stumbled across the name of a little Spanish market in Little Italy (?), and that's when the synapses started firing.  Jamon! Saffron! Paella! Paella sounded like a great idea, but I wasn't too keen on all that rice...so, what's a girl to do? Surely, move up along the coast, hit up Provence and utilize a bit of their know-how for a tasty one pot dish.  BOUILLABAISSE! This dish is definitely more simply to make than it's namesake is to pronounce - that's for sure.  Of course, most every coastal town on the Mediterranean has their own version of a fish stew - zuppa de pesce, suquet de peix, caldeirada - it just depends on the ingredients that go into it. No matter which you choose, it's bound to be delicious!
The story goes that bouillabaisse was cooked on the beach by fishermen, who used a large cauldron over a wood fire to cook fish that they couldn't sell to the market - seems like an activity I may need to partake in in the near future! Needless to say, they used some odd fish types, such as rascasse or scorpionfish, and a bouillabaisse is seen as inauthentic without the use of said fish! Well, I unfortunately do not have access to rascasse, so I just had to go ahead and make the bouillabaisse in simple Stainless Steel Thumb form.
Simple Bouillabaisse
Serves 2
3 T olive oil
1/2 medium yellow onion, thinly sliced
1/2 fennel bulb, thinly sliced
4 cloves garlic, peeled and thinly sliced
1 t crushed saffron
1/2 teaspoon aleppo pepper
1/2 cup white wine
1.5 cups chicken/fish/vegetable stock
1 14.5 oz can stewed tomatoes, preferably peeled - I used pomodori pelati
1 T tomato paste
Zest of 1 orange
1/2 pound small, new potatoes
1/2 lb firm whitefish fillet, skinned - I used haddock, cut into two pieces
1/2 lb mussels, scrubbed and debearded
1/2 lb manila or littleneck clams
2 large head-on prawns or langoustine (if all else fails, you can just use a few small shrimp)
1/4 cup minced parsley
Sea salt
Fresh ground pepper
Olive Oil
A few slices of a crusty, country style loaf 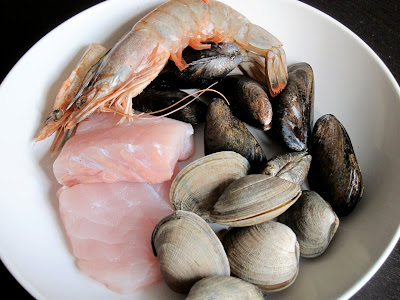 In a heavy bottomed saucepan, French oven, or doufeu, heat olive oil over medium-low heat.  Add in the onions, fennel, and garlic, and cook until soft.  Depending how much time you have, you can either simply sweat the vegetables, or let them cook longer until they caramelize - this will just intensify the flavor. When sufficiently cooked, add in the saffron and pepper, stirring until the vegetables have a nice yellow hue to them.  If you don't have aleppo pepper, you can substitute with a sweet paprika - or any pepper for that matter, depending if you want a kick or not. 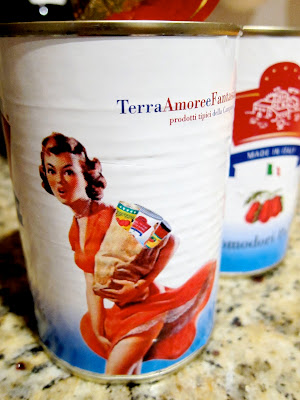 Pour in the white wine and bring to a boil, cooking off the alcohol and reducing until it's almost evaporated. Add the tomatoes, tomato paste, stock, 1 t of orange zest, and the potatoes.  Stir together, cover and bring back to a boil.  Try to break up any larger pieces of tomato with a fork or a wooden spatula.  Cover and let cook for about 10 minutes to let all the flavors to meld together.  Give the broth a taste and season with salt and pepper. 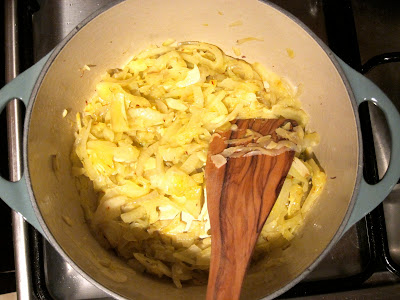 Finally, cook your seafood! AT this point, you have to pay close attention to your ingredients - obviously, the shellfish will take the least amount of time to cook, and the smaller the shrimp you use, the less time it will take as well.  For my bouillabaisse, I laid the fish fillets down first and let them cook for about two minutes.  Next I laid in the prawns, covering and allowing these two cook for another two minutes.  Finally, I added in the clams and mussels, cooking until they opened.  At this point, all of the seafood should be cooked perfectly and ready to go!
Now it's time to plate! Try your best to separate all the ingredients evenly. I found that its best to start layering your plate with the fennel/onion combination first, then placing the various seafood all around, finally topping it off with some broth.  Finish with a sprinkle of parsley, some sea salt and fresh ground pepper, and a small dash of olive oil. A little bit of orange zest on top doesn't hurt either! 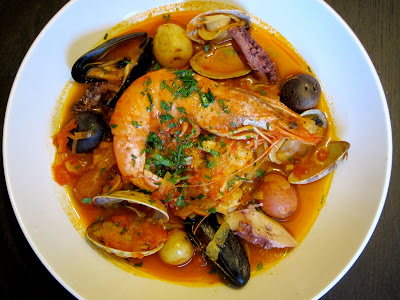 Serve with a thick slice of grilled country bread - and if you want to be slightly more authentic, slather the bread with a tasty aioli or a rouille sauce. As you can see, I also had a bit of olive-oil poached octopus left over, and figured that would be a nice addition to the pot - which it was! This bouillabaisse was fantastic - simply, easy, and light (yes, light!).  It has a slight brininess from the shellfish, with a great depth of flavor from all the layers of ingredients.  The orange zest definitely added a nice brightness to the dish as well. So, if you were ever intimidated by bouillabaisse, give this easy recipe a try!
Email Post
Labels: bouillabaisse despana fennel fish stew herbes de provence mussels new potatoes pomodori prawn razor clams suquet tomatoes zuppa di pesce