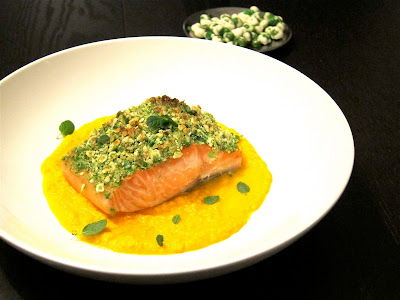 Yes, that was in fact a quote from Teenage Mutant Ninja Turtles circa 1993 - don't hate on it.  I was at work the other day when one of my peoples brought in a box of wasabi peas.  It's not like these ever fell off my radar, but whenever I came across them, they just were another fixture in a sea of bulk goods or random ready-to-eat packages. That being said - seeing them by their lonesome, I had a light bulb moment! Or my memory synapses started firing. Whichever one it happened to be also comes in tandem with me having no inner monologue, so of course I blurted out, "WASABI PEA ENCRUSTED SALMON!".  At this point in my life, it's really not an abnormal occurrence for me to start shouting out recipes or food statements - thankfully!  Needless to say, I didn't invent the wasabi pea encrusted salmon, nor do I recall where it came from, but it was a proper staple in my family house a bit over five years ago.
Taste memory in full action, I knew I had to make this! I'm not quite sure what we had the salmon with at home before, but I decided I had to make a full on plate to showcase the salmon.  And that's when critical cooking thinking came into play! First, my mind went towards what would look nice color-wise on the plate next to the salmon - radicchio? Meh.  Beets? Don't think so. Carrots?  BOOM. Sushi restaurant imagery started swirling in my head, and all I could think of was that carrot ginger dressing you get on those "included" salads.  Ingredients in hand, I was back off to the apartment to start cooking!
Wasabi Pea Encrusted Salmon with Carrot-Ginger Puree
Serves 2
For the puree:
2 cups roughly chopped carrots
2 T roughly chopped ginger, peeled
1/2 c chicken or vegetable stock, or water
2 T rice wine vinegar
1/2 t sesame oil
1/4 cup grapeseed or olive oil
Sea salt and fresh ground pepper to taste
This is pretty much a mellowed out, smoother version of the ginger dressing you may have had in some sushi joints.  Steam or boil the carrots until fork tender.  In a blender, combine the carrots, raw ginger, stock, vinegar, and sesame oil and puree until smooth.  With the blender running, slowly add the remaining oil until the puree is smooth - you may not need all of it!  Season to taste and set aside. 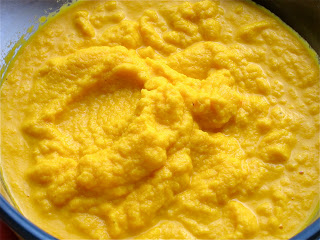 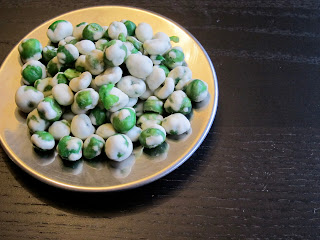 About 20-30 minutes prior to cooking, take the salmon out of the refrigerator and coat the flesh side of each salmon portion with an ample about of salt.  In a food processor, pulse the wasabi peas until it's granular, but not completely pulverized, and set aside. 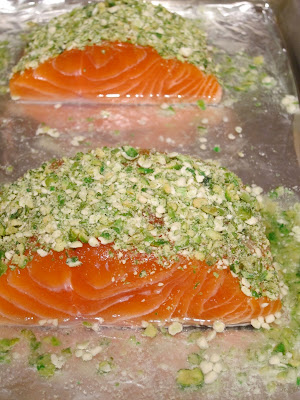 When ready to cook, preheat the oven to 350F.  Press a good amount of the wasabi peas into both fillets, and place them into a shallow baking dish.  Add enough water into the dish to come about halfway up the side of each fillet.  Please in the oven and cook until the salmon is medium-rare - 10-15 minutes depending on the thickness of your fillet.  For the final minute, place the salmon under the broiler to brown the wasabi crust just a tad. Be sure to keep an eye on it!
**Eric Ripert Trick Alert** - the fish is ready when a metal skewer inserted into the metal is just warm when you touch it to your lip.  Brilliant!
When ready to plate, reheat the carrot puree.  Spoon enough puree onto each plate to just cover the bottom, and place a fillet in the center of each plate.  Sprinkle with small mint leaves (or minced mint leaves), zest of a bit of lime over top and serve. 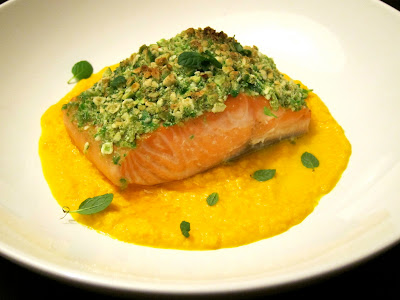 Well, the salmon was just as good as I remembered it - pulverizing the wasabi peas creates a great crust for the salmon! It evenly distributes the wasabi that was on the peas so the flavor is subtle and not as spicy as one would expect.  This goes perfectly with the carrot ginger puree as well.  The puree itself is beautiful in color and has great flavor - the gentle cooking of the carrot with the kick of the raw ginger definitely amplified the flavors in the salmon.  The mint leaves add a nice brightness to the dish to complete it! This dish is a definite must-try - and it may become a mainstay in my cooking repertoire!
Email Post
Labels: carrot ginger mint pea recipe roast salmon wasabi wasabi pea

Inspired by eRecipeCards said…
Greetings. This is my first time on your blog, but you have a terrific one. I am always on the look out for new blogs, new ideas. I especially appreciate all the details you do. Great photos makes it seem like anyone can replicate the recipe!

It is a tool for bloggers to see and to be seen. Your posts would fit in perfectly.

in addition, all photos, recipe titles as well as your blog name would link directly back to your blog. Thus giving you new attention and potentially new readers.

Or, if you just want to take a look at a lot of fellow food bloggers all in one place. A great learning experience to get ideas about how to establish your own blogging voice!


Please take a look. If you have any ideas or questions, please do not hesitate to write