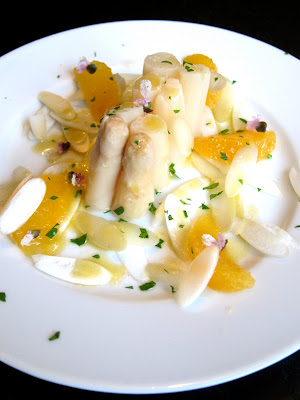 A perky li'l bunch of white asparagus caught my eye the other day - I know, I know, they're not in season right now, but I couldn't resist myself! The buggers looked healthy and crisp, so at that point, there was no turning back.  White asparagus you say? Expensive!? Well - it wasn't any more expensive than regular green asparagus, so I definitely couldn't use that as an excuse.  And, to be honest, I've only had white asparagus a handful of times in my life, and I figured I might as well experiment with it! I cased a few other aisles, and picked up a jar of canned white asparagus as well. 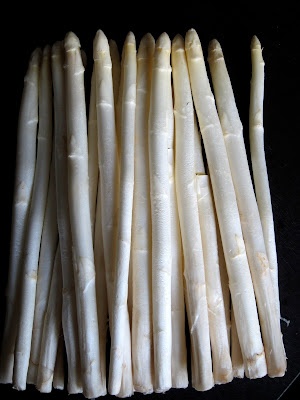 So what's the difference between white asparagus and all the colored varieties? They're essentially quarantined underground until they're ready for picking.  So, instead of the varieties that are allowed to see white and that grow like grass - pretty much - these guys have a bit of a sand/soil combo mounded on top so they don't see the light at the end of the tunnel!  Yes, it may seem like vegetable cruelty, but it makes for a darn good final product!  As you can imagine, white asparagus also has a milder flavor than any of the colored varieties - there's no chlorophyll or anthocyanin to give it any flavor.  But it's quite tasty! It has a subtle "asparagus" flavor, but almost is reminiscent of jicama, without the mealy texture - with a great snap to it! I actually had to stop myself from eating so many random pieces of the asparagus raw while I was prepping it.   The end result to my white aspar-adventures was a delicious, fresh, light salad!
Duo of White Asparagus with Orange Vinaigrette
Serves 2
4 large, jarred white asparagus
8 white asparagus
1 orange
2 T minced basil, and basil flowers if you have them
A few shavings of a hard sheep's milk cheese - Pecorino, Roncal, Manchego, etc.
6 T good olive oil
2 T red wine, or sherry vinegar
Sea Salt
Fresh ground black pepper 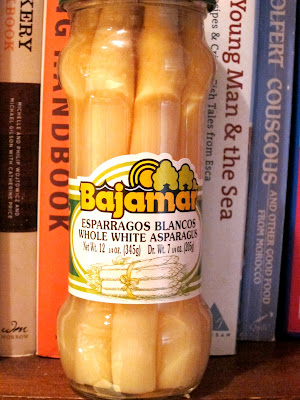 This salad is super easy to prepare! Remove the asparagus from the jar and pat dry.  Cut each stalk into approximately 1.5 to 2 inch pieces.  Set aside.  For the fresh asparagus, snap off the woody ends of each stalk.  To do this, stand each stalk upright, hold onto the bottom with one hand, and gently snap the stalk from the top with the other hand.  Each stalk with snap off at the perfect point! Once this is done, slice each asparagus on the bias as thin as possible.  The white asparagus looks great when it's cut thinly lie this - the inside is pearlescent! 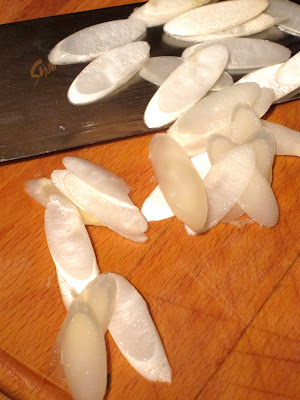 Zest almost the entire orange, and then supreme the fruit.  Cut a thin portion off of each end, stem and bud, so it can stand upright.   Cut off the peel and the pith, leaving only the fruit.  Carefully cut out each section  - save the supremed fruit for assembling the salad. To make the vinaigrette, combine the oil and vinegar, and shake until emulsified.  This is really just the simple vinaigrette ratio - you can make more or less, just ensuring you use the 3-to-1 ratio.  Taste for seasoning.
This salad is super easy to assemble - you basically just throw all the food around onto each plate! Place two stalks worth of jarred asparagus on each plate - upright if you can.  Scatter both the sliced fresh asparagus and orange sections all around each plate.  Lay a few shavings of cheese around the asparagus as well.  Finally, drizzle the vinaigrette over each plate, squeeze a tad bit of the supremed orange interior (carcass? no? ok.), and garnish with a bit of zest and basil.  I like to add a bit more fresh ground pepper and Maldon sea salt at the end as well.
White asparagus where have you been! This may become a staple salad when white asparagus rolls around - granted, the JARRED asparagus are the expensive ones, but this would be just as food without them.  In the salad, they do add a nice textural component.  This salad hits all the great points - crunchy, yet tender, salty, yet sweet, with a little bit of acidity and bitterness.  The cheese gives it a great depth of flavor - umami if you will - and the basil just brings it all together.  Next time, I'll be on the lookout for blood oranges - that would just take this salad to the next level. This really is a perfect end of summer salad! 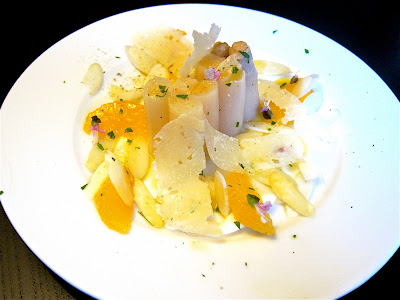