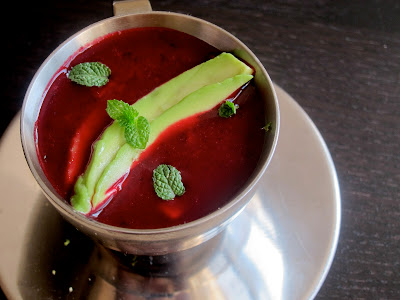 Well folks, we're already a few days into March, and I'm back in action! I took a bit of a hiatus (clearly) - I'm in a bit of a work-related transition at the moment, which, when it all plays out will be very good but at the time is a tad bit stressful. It's also not helpful that during winter-time, my window of opportunity to utilize natural light for photography is considerably small, maybe even Wonderland sized, cutting my time down even more!  That being said, the break hath been taken, and I'm back! And thanks to the powers above, because cooking for me is quite therapeutic I must say. SO, why not kick off March with a bit of a healthy soup?  And by healthy soup, I mean BEET SOUP!! I can hear you now...borscht? I mean, kind of, considering it's made with beets.  But it's not made with meat stock, or cabbage, and it surely doesn't take Eastern European in origin.  Needless to say, some may be opposed to this (aka D., who when I told him I was making beet soup, made a face similar to that of a small child told to eat brussels sprouts), but I can assure you it is absolutely delicious, refreshing, and extraordinarily good for you! And it's vegetarian...technically vegan.

The recipe for the soup itself can remain the same, but I'll be experimenting with garnishes in the coming days with leftovers.  To me, not only are beets delicious on their own, but they also have a great affinity for a TON of different flavors!

Put on all black clothes.  Beet-y liquids + anything besides black = Texas Chainsaw Massacre style stainage.  Just a forewarning!  Moving on to the actual recipe: 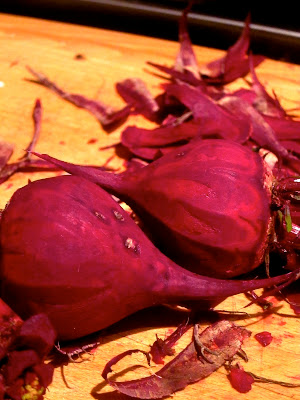 Place the beets, shallot, and garlic in a steaming dish above about an inch of water.  I only have a bamboo steamer at the moment, and frankly wasn't in the mood to stain the heck out of it, so I simply placed the vegetables in the water itself.  Bring the water to a boil, and steam/cook until fork tender.
Gently place the vegetables and steaming liquid into a high-speed blender or food processor, and pulse together a few times. Add the vinegar and parsley, and pure until smooth.  With the blender on, slowly drizzle in enough coconut milk to reach a smooth, creamy consistency.  I use coconut milk from TJ's that comes in a box as opposed to the generic Thai-company, thicker, goopier coconut milks.  You can use whichever! Obviously the thicket coconut milks will leave you with a thicker, creamier soup.  To each his own!  Season to taste with salt and pepper and chill.

To serve, finely dice 1/4 of the avocado and squeeze a bit of lime juice atop to prevent browning. I placed a bit of finely diced avocado in the bottom of each bowl, and poured the soup over top.  It's a bit of nice showmanship, but hey, it looks good! I finished each with a grating of lime zest, sliced avocado, and mint leaves scattered about.  Easy peasy! 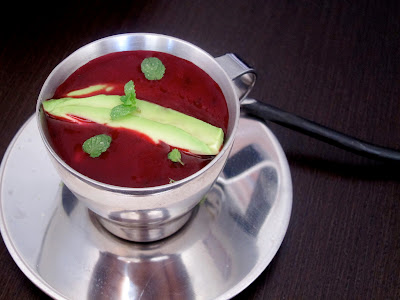 This soup really is fabulous, in more ways than one! Visually, the soup is stunning - it's a deep garnet color, with a beautiful sheen to it.  The contrast of the green avocado, lime, and mint really pops.  As far as flavor goes, the soup really has a great, fresh, authentic beet flavor to it, even though there are other ingredients.  There are subtle hints of the parsley and coconut, but the beet and acidity from the apple cider vinegar are what really shine through.  The avocados adds a nice toothy element to the dish, while the lime and mint really brighten it up.  Altogether, a grand combination! As I stated before, this soup will be fun to play with.  I think using some microgreens atop would lead to a great presentation, and flavorwise, I might try out a walnut crema and orange flavorings.  Maybe a horseradish yogurt swirled on top.  Goat cheese and sauteed beet greens? Heck, the options are limitless!!
Email Post
Labels: avocado beetroot beets coconut milk healthy lime mint puree soup