day of the tentacle 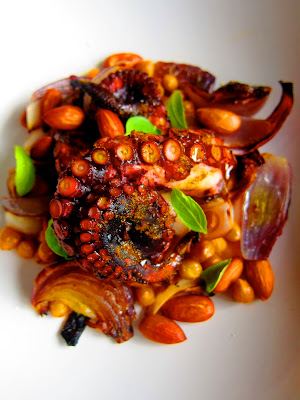 Well, we all know about my strong affinity for cephalopods, and today's recipe leaves no exception to that rule! I saw myself some octopus at the market, and the rest is history.  I sometimes wonder if it's possible for someone to have TOO much octopus? I would venture to say no....but if it is possible, I'd be the first to find out.  That being said, I probably won't be slowing my consumption any time soon.  I know, I know - they are one of the most intelligent creatures out there...dare I say clever? Well, they can use other sea creatures shells and RUN ON THE OCEAN FLOOR! (thank you Planet Earth). Or, since they hate paparazzi, they will STEAL your brand new underwater camera and run away with it. I guess I really wouldn't want to be caught in an underwater alley with these guys. But, all danger and cleverness aside, octopus as an ingredient is awesome! Not to mention, it is super healthy - it's a straight up, epically lean protein.  Can't go wrong with that! And if you're squeamish about the tentacle situation, don't worry - it's doesn't have as creepy of a texture as you may think! So give it a try, and you won't be disappointed!

In my experience of eating octopus, I really don't discriminate in preparation - I've stewed it, steamed it, grilled it, braised it you name it! But I really do love the flavor of octopus with a bit of char on it.  Since I don't have the means to grill my octopus, I got my broil on! And the results were fantastic. 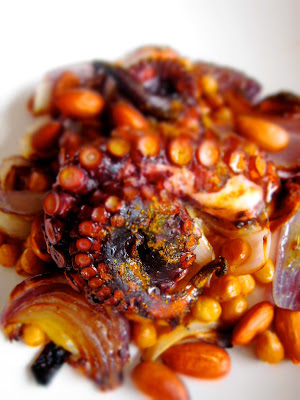 Preheat the oven to 425F.  In a large roasted pan, toss the onion and chickpeas with enough olive oil to coat (a few tablespoons should suffice).  Sprinkle with about 1 t sea salt, and a few grinds of black pepper.  Let this roast for about 30 minutes, shaking the pant every so often, until the chickpeas have started to brown and the onions have softened. Meanwhile, fry the almonds. In a medium skillet, heat about 1/4 cup of olive oil until hot, but not smoking.  Toss in the almonds, and allow them to cook for about seven minutes, until they're nicely browned but not burnt. Transfer with a slotted spoon to a plate covered in paper towel and allow to drain.  Set aside.

Next, prep your octopus for broiling.  If you were able to purchase pre-cooked octopus, and you only have the tentacles, you're one step ahead! Otherwise, proceed with the following. Remove each tentacle - I left them whole for presentation, but you can cut them into large pieces if you prefer! Also, cut the head portion into large rings.  Right before broiling the octopus, dust each piece with the curry powder.  Remove the onion mixture from the oven and place the octopus pieces over top.  Turn the broiler on, and place the roasting pan back into the oven, about 4-5 inches from the broiler.  Allow to cook for about seven minutes, or until the octopus has a bit of char on it.

To plate, spoon the chickpea and onion mixture evenly amongst four plates, topping each with two tentacles and a few rings.  Divide the almonds evenly amongst the four plates as well.  Squeeze a lemon quarter over each plate, and finally, sprinkle the Thai basil over top. If you are so inclined, you can finish the fish off with a little Maldon sea salt and some more fresh ground pepper. 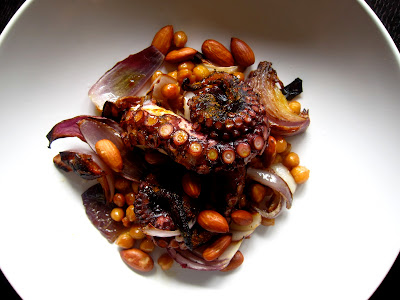 So, not only is this dish BEAUTIFUL to look at, but it created the most heavenly smell in my apartment!  Furthermore, the flavor combination was beyond delicious.  The dusting of curry powder gave just enough warmth and heat to the dish, without making it too spicy, and it was just enough to give a mild, underlying curry flavor - almost so discreet that you may not be able to pick out the flavor immediately.  The roasted onions and chickpeas had a great depth of flavor to them, that was only  brought out by the toastiness of the fried almonds.  The Thai basil topped the dish off and took it to an entirely different level.   Seriously, go get yourself some octopus and give this dish a try - it's sure to be a crowd pleaser!

Poached Octopus
1 whole octopus, cleaned (if you're squirmish, you're fishmonger is sure to help out!)
1 cup white wine vinegar
1 lemon, halved
8 black peppercorns
4 bay leaves
2 T plus 2 t kosher salt
In a large stockpot, combine all of the ingredients with 1 gallon of water and stir to combine.  Be sure to squeeze the lemons prior to putting them in the liquid!  Bring the liquid to a boil, lower the heat, and let simmer for about 10 minutes so the flavors come together.  Here's the fun part! With some heavy duty tongs, dunk the octopus headfirst into the water three times, leaving it for about five seconds each time. This action lets the tentacles curl up properly! After the final dunk, drop the whole octopus in and bring back to a boil.  Lower the heat once more, and allow to simmer for about 30 minutes, or until the octopus is tender.  Remove from heat, drain well, and set aside to cool.  Booya!