Sorry Donald Duck - you know I love you, but sometimes I just have to move past that and realize that I just straight up love a good duck dish.  I mean, some friends got into a conversation about what animal they would taste like - strange, but true - and my animal just happened to be duck.  A) I 100% agree and B) I'm not mad about it at all - in fact, I'm EXCITED! Because duck is awesome.  Ok, enough of this crazy talk, let's move on to some cooking! I seemed to have seafood-ed myself out on this particular day, so after a little small talk with my fishmonger, I sauntered over to the butcher.  Steak, meh.  Rabbit? Too lazy to prep it (yea, you'll laugh about "too lazy" after this recipe). Veal, just had it.  BEAUTIFUL DUCK BR....leg? Before I was able to talk to the butcher, I started quantifying if I could in fact confit some duck legs in time for dinner.  Survey says no, but fortunately, they had just prepped some duck breasts in the back. Thank the LAWD. And beautiful, Muscovy duck breasts they were. These duck breasts are no joke, and worth every penny!  I've always had the tendency to serve my duck with fruit - whether grilled peaches, in a salad with berries and goat cheese, you name it.  But today I decided to use some veggies that are as close to sugary fruit as you can get...beets! (Yes, I know - oranges are fruits, but work with me here!) Beets - one of my favorite root vegetables!  If only I was able to find a rainbow assortment! Better luck next time - either way, the dish still turned out both visually stunning and delicious! I played a little game in my head called connect the dots of random foods - duck > duck in orange sauce > beets with orange zest > orange zest and fennel > needs a little kick....sauteed beet greens with chili flakes! Yes, things like this happen in my head...and off I went! 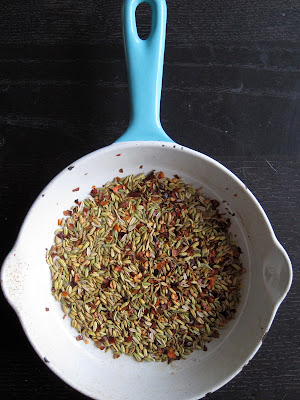 For the spice rub, combine the fennel seeds and chili flakes in a small sauté pan, and toast over low heat until fragrant.  Remove the pan from heat, and allow to cool – ensure you don’t burn the seeds!  Once they’re cooled, place the fennel seeds and chili flakes in a spice grinder and grind into a relatively fine powder.  Combine this mixture with the orange zest and paprika and reserve. Thoroughly rub the flesh side of each duck breast with the spice mixture, and allow to sit in the refrigerator at least one hour, or overnight.

Next, start preparing the roasted beets and oranges. Preheat the oven to 350F.  For the beets, simply place them into aluminum foil, add about 2 T of water, and fold over. Place these in the oven and allow to roast until fork tender, about 45 minutes to an hour.  The beets will only get sweeter the longer you cook them, so it’s no worry if you go over in time!  When the beets are sufficiently roasted, allow to cool and finish by rubbing the skin off. Reserve. 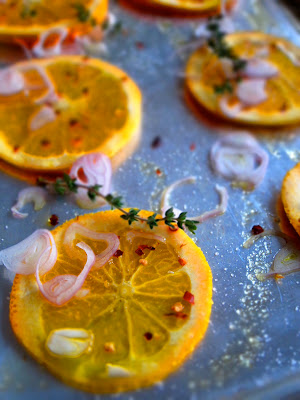 Place the oranges in a small baking dish.  Sprinkle the rounds with salt and chili flakes, ensuring even distribution.  Next, scatter the sliced shallots over the oranges, and add the oil and thyme. Cover with aluminum foil and cook in a 350 degree oven until tender, about 45 minutes. Allow to cool in the oil and reserve for plating.

While the orange slices and beets are roasting, get after the sauce! In a  heavy-bottomed sauce pan, add a few tablespoons of olive oil and allow to heat up over medium heat.  Toss in the shallots, and caramelize – ensuring not to burn them.  Next, add a dash of chili flakes and continue to cook until nicely caramelized. Deglaze with orange juice and continue cooking until the juice has reduced by half. Add thyme sprigs and chicken stock, stirring to combine. Continue cooking until chicken has reduced by at least ½.  Add rosemary and garlic cloves, allowing to cook 15 more minutes on low heat. Finish with orange rind and allow to steep 10 minutes. Strain the reduction and reserve – we will be reheating this later and reducing it even more!

Once everything is ready to go, you can start cooking the duck and the beet greens!

When ready to cook, allow the duck breasts to sit at room temp for at least 20 minutes.  Prior to salting and cooking, score the fat side in a criss-cross pattern, making sure not to cut all the way into the flesh.  It’s easiest to use a super sharp knife and lay it almost flat on the fat, pulling the knife toward you.  If the knife is sharp enough, it should go the proper depth.  Next, season the duck on both sides with an ample amount of kosher salt.  In a large non-stick pan, cook the duck skin side down over low heat, allowing the fat to render from the skin. The slower and lower you cook, the more fat you’ll render, and you’ll also finish with a beautiful, golden crispy skin.  Be sure to drain some of the fat while your cooking, leaving only a tiny bit for the duck to cook in - and save this! You can use it to cook potatoes...or anything else really! Allow the duck to cook on the skin side for about 8-10 minutes, until the skin is nice and crispy.  Flip the duck and allow to cook a few minutes more, until it's reached your desired temperature.  I like my duck almost rare in the center, so it's a little less time for me.  Remove the duck form the pan, and allow it to rest for at least 5 minutes, 10 if you have the time!

Heat up a large pan over medium heat with olive oil until it shimmers - cook the garlic, onions, and crushed pepper for a few minutes until the onions are translucent, being careful not to burn anything.  Throw in the beet greens, stirring occasionally until they have wilted down a bit.  Pour a tad bit of vinegar over top and stir together - taste and season with salt and pepper as needed.  Reserve 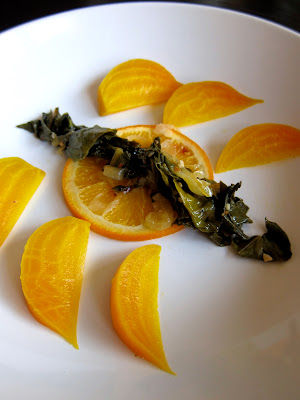 Alright, now it's time for the really good stuff. Plating and eating! Ensure that your orange reduction is heated up, and allowed to reduce to a nice syrupy consistency.  Place one roasted orange round in the center of each plate, topped with a bit of the beet greens.  Next, surround these by 6 roasted beet wedges. 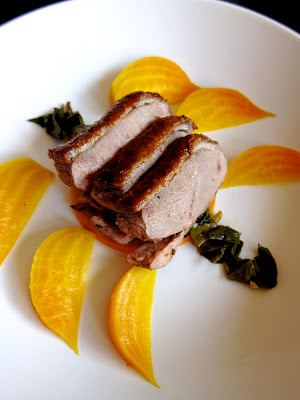 Slice each duck breast on the bias - not too thin, but just enough so you get a good skin to flesh ratio - I like about 1/2 to 3/4 inch or so each.  Divide the duck evenly between the plates, and lay the slices on top of the orange and beet greens. Place a few beet chips between the slices, or even just scatted around the plate - however you like! Finish with a nice spoonful of the reduction over and around the duck. I also finished mine with a bit of thinly sliced tarragon, some toasted chopped hazelnuts, and even a sprinkling of beet powder for more color. Why not? 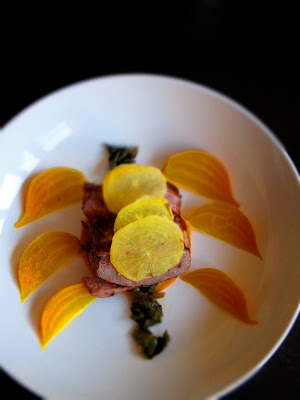 This dish is worth every second that goes into making it - although, if planned correctly, it's all fits together perfectly! The combination of flavors was straight up harmonious.  The sweetness and acidity of the orange was mellowed out by roasting and given a bit of a savory twist from the herbs and shallots - combining this with the roasted beet allowed the sweetness of each to perfectly balance once another out.  The duck itself was perfectly cooked with crisp skin - the spice rub definitely added a nice bit of heat and flavor (especially the fennel!) to the dish but didn't overpower anything.  The beet greens added a great depth and earthiness to the dish, while the reduction brought out a bit of umami.  And the beet chips!! Oh, those beet chips.  I could eat a thousand of them!! Not only are they beautiful to look at - and as thin as paper (literally, you could see through them) - but the flavor is just out of control.  If anything, just make a few batches of them and you'll be satisfied! 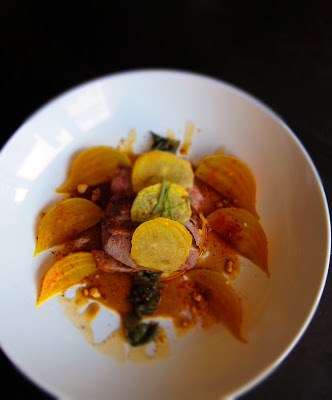 Directions
Preheat oven to 250 degrees. Slice beets very thinly into rounds, preferably on a mandoline. Bring water and sugar to a boil in a small saucepan, stirring constantly until sugar dissolves. Add beets. Reduce heat, and simmer until slightly translucent, about 30 minutes.

Using a slotted spoon, transfer beets in a single layer to a nonstick baking sheet, or regular baking sheet with a Silpat. Bake until dry and slightly firm, about 1 hour. Remove from the pan and reserve - these can be saved in an airtight container for a few days - if you don't eat them first! I trust these would be just as good not candied, as well.

Haydn and Kristy @ Taste Buds said…
I love duck. It's almost worth cooking a duck for the fat you get to save after its done cooking. Once again, you've blown my mind. You're ability to present is next to none.

kinhthucteao said…
CongngheVR Industrial Co., LTD has focused on top quality VR Glasses and power banks for over 1 years in Vietnam. We started as a small operation, but now have become one of the biggest suppliers in VR headsets industry in Vietnam.

Factory: CongngheVR located in the Vietnam. As a global supplier in the VR headsets, power banks and other urethane products, CongngheVR is to create added value for customers around the world.

Product: CongngheVR Products includes the following:1, vr shinecon 2, all in one VR 3, Bluetooth remote control 4, power bank We supply vr glasses products all over the globe to a wide range of companies worldwide, ranging from large multinational organizations to small individual companies.

Our service: Besides our existing molded products, CongngheVR also can produce VR Glasses products according to the drawings or samples from our customers.
June 22, 2017 at 4:29 AM