baby octopus - where art thou? 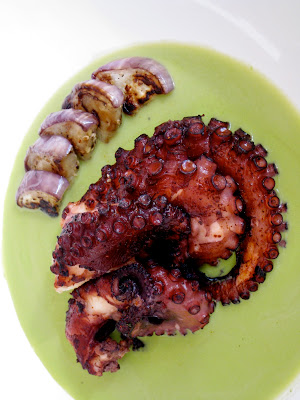 I think I've eaten more octopus in the past few weeks than I have in my entire life combined - and I am totally okay with that.  With my mother in town, we probably had octopus in some shape or form during 90% of the meals we had.  Of course, this was unintentional - any time I plan on having octopus, it is nowhere to be found (sneaky devil!). 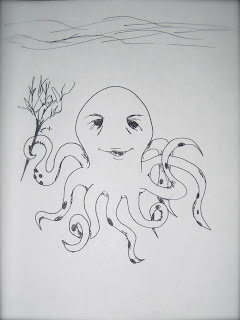 All I wanted this morning were some cute little octopus babes to fiddle around with. Literally, without fail, every time I am in search of baby octopus, no one has ANY, and whenever I do NOT want octopus, they have the most beautiful ones on display.  Yes friends, meet the elusive octopus. Just as it is sneaky in the depths of the ocean, so it is in the market.  Today, I was on a mission. I traversed to my personal playground (read: market) fully determined to get baby octopus somewhere. The conversation proceeded as follows:
- Dear fishmonger, do you happen to have baby octopus today?
- No. Well, maybe. The basement? Hey, we got baby octopus in the basement? Yeah! Alright, I'm finna get you some bebe octopus. Aw, no we sold out this morning. We got none, sorry ma'am!
PEOPLE. Get your act together! First of all, there probably was never baby octopus today, considering I arrived right when said store opened, unless I have an evil twin who is trying to ruin my culinary world somewhere in Manhattan (plausible). Fortunately for me, they had regular, giant octo, of which I've never cooked before.  My main concerns were all the stories you hear about cooking octopus: how you have to smack it against a rock for an hour, hammer the heck out of it for 45 minutes, cook it for seven days - you get the gist - and I did not have this sort of time. Then my fishmonger claimed that you could steam the octopus in only 15 minutes - sounded fishy to me.  I was planning on braising it anyway, so I had to improvise - octopus has a small window of time between being raw and toughening back up where it is cooked perfectly - I figured it would still take at least 45 minutes to cook thoroughly considering the size of the guy (2 lbs.)  So, octopus in tow, I was ready to start cooking!
I knew I wanted to braise the octopus, and possibly broil finish it, but I needed something to contrast the flavor, texture and look of it – so after raiding my refrigerator, I decided on a watercress and fennel soup.  I thought even of making it a veloute, but that involves entirely too much butter and cream, so that idea was quickly scrapped. Throw in a little graffiti eggplant, and you’re good to go!
Braised Octopus with Sauteed Eggplant and Watercress-Fennel Frond Broth
For the octo:
1 octopus, cleaned
¼ cup olive oil
2 garlic cloves, smashed
1 bay leaf
One lemon, zest peeled off and fruit reserved
1 T peppercorns
1 bottle dry red wine – you’ll only need about ½ cup for cooking. Drink the rest.
Ancho Chile Powder
For the soup:
1 bunch watercress – about 2 cups
Equal amount fennel fronds
1/3 C chicken stock
1/3 C reserved boiling liquid
1 T mint, chopped
2 T greek yogurt
Salt and Pepper
For the eggplant:
1 eggplant
A few tablespoons salt
3 T olive oil
Fresh ground pepper
The most tedious part of cooking octopus is cleaning it.  Maybe this is part of the reason I like baby octopus better – there aren’t giant tentacles flying around every which direction, and they’re not as creepy to clean.  This recipe could also be done with baby octopus mind you! To clean the octopus – you can have your fishmonger do it – you have to clean out its innards, cut off its eyes, and remove its beak. It's really not as gross as it sounds.  Simply flip the body (what looks like the head) inside out and discard everything inside, including the ink sac.  With a sharp knife or scissors, cut around the eyes and discard. Finally poke around the center of the octopus' underside where the tentacles meet - you should feel something similar to a popcorn kernel. This is the beak - push it out and discard.  Be sure to rinse the octopus off, paying close attention to the tentacles - make sure to get any sand out of the suction cups.
Now, start heating up a heavy-bottomed saucepan large enough to hold your freshened up octo.  Heat the olive oil over medium heat, and add the lemon zest, peppercorns, garlic cloves, and bay leaves.  Allow this to cook, stirring occasionally until the cloves become soft. 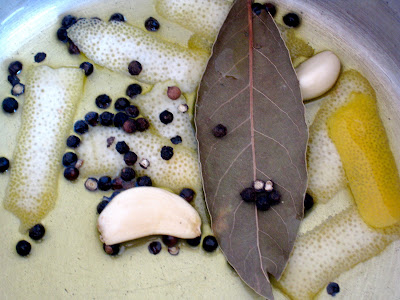 I must say, the aroma coming from just these components was fantastic - the peppercorns started to pop, the garlic started to brown a bit, and the oils from the lemon zest were melding in with the olive oil.  I honestly may just cook up an entire bottle of plain olive oil with these ingredients and bottle it back up.  Back to the main event!
Once the garlic has softened, gently toss in your octopus.  Turn it about a few times, ensuring the it all gets coated with olive oil.  Cover, reduce heat to low/medium-low (depending on your stovetop) and let cook for at least a half an hour.  I flipped my octopus over about 15 minutes through this time period. During this time, you can prepare the eggplant (recommended - see below), soup, dance around, clean, or do whatever you want.  But wait, didn't you say this octopus is braised?! But of course! The fun thing about octopus is that they retain a lot of water - once they hit the heat, they start releasing all that water into the pan (hence no added salt). After a half an hour, there should be a substantial amount of braising liquid in the pan.  After 30 or so minutes, splash in a bit of red wine, cover and cook some more.  Start checking the octopus fairly often with a fork after 15 minutes until it is fork-tender.  Once this point is reached, remove from heat, keep covered and let cool while you assemble everything else. 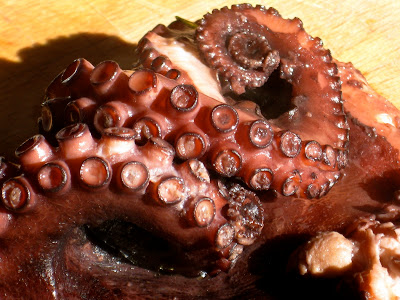 While this is cooking, slice the eggplant into half moons or wedges, whichever you prefer.  Toss the eggplant in a strainer with a couple tablespoons of salt and let them sit for at least 30 minutes to draw out excess moisture. Easy peasy! 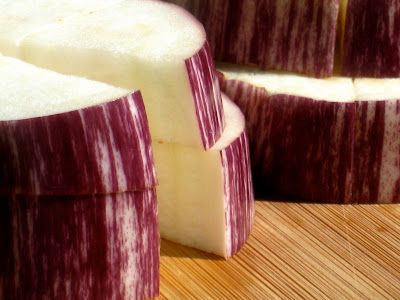 For the soup, I wanted something flavorful, and very vibrant in color to contrast the octopus - hence crisp flavored, bright greens.  To preserve and even brighten the green-ness, the fronds and watercress were both blanched, preserving their color and also taking the chlorophyll taste out a bit. For this, bring a pot of water to boil. While it's coming up to temperature, prepare an ice bath.   The watercress really only needs less than a minute - it doesn't really need to be cooked through.  Once it has brightened up a bit, remove and place in the ice bath.  Next, place the fennel fronds into the boiling water - these should be done once the water comes back up to a boil.  Remove as well and place in the ice bath.  When they are sufficiently cooled, lay out on a paper towel.
Note to all!! Reserve some of the boiling liquid to use in your soup! This is called potlikker - a very critical part of Southern cuisine - the water is extremely flavorful, not to mention it retains some of the vitamins left behind from the greens.  This is more intense when cooking really tough greens such as kale or collards, but it's tasty nonetheless.  Be sure to add a bit of it when blending the soup.  I used my (NEW!) immersion blender to pull this all together.  Roughly chop the blanched greens to help our your blender - the fronds and watercress are slightly stringy, so they tend to cause problems with fast rotating objects.  Blend the greens, the potlikker and the stock together with a little salt and blend until as smooth as you can get it.  Pass this through a sieve to get rid of the greenery chunks. Blend this liquid again with the mint and the yogurt.  Give this one final pass through the sieve or even through cheesecloth to get a pure liquid.
Finally, for the eggplant, remove it from the strainer and place on paper towel.  Heat up a saute pan over medium-high heat, and swirl in the olive oil.  When the oil gets hot, place the eggplant into the pan and cook until golden brown on one side.  At this point, if you want to broil the octopus (I recommend it - it gives it a nice crispy texture), do so now.
Turn the broiler on high.  Cut the tentacles from the body, and then cut them in half.  Place the tentacles suction cups up on a sheet pan and sprinkle with a little bit of ancho chili powder.  Broil until a little crispy. Back to the eggplant! Once they are golden on one side, flip over and brown the other side.  Once these are done, and the octo is crispy, you are ready to plate! 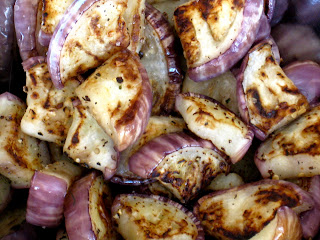 Ladle a small amount of the soup into a shallow bowl, and place tentacles on top.  I pre-cut the tentacles but it wasn't really necessary. 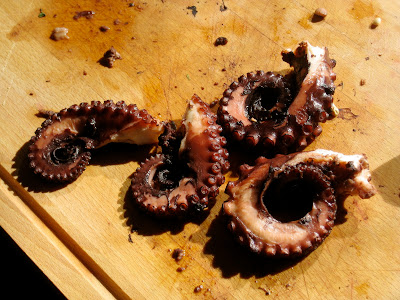 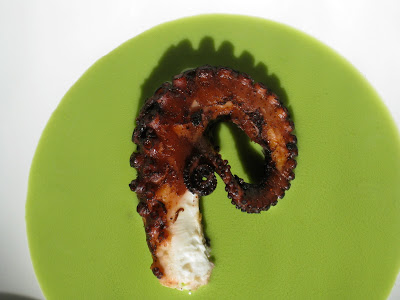 Place slices of eggplant on the side, underneath, or scatter about - whichever you prefer. Finally, squeeze fresh lemon juice over the tentacles.  Time to eat!!
If you have some microgreens standing around, throw a few of those on top and enjoy! 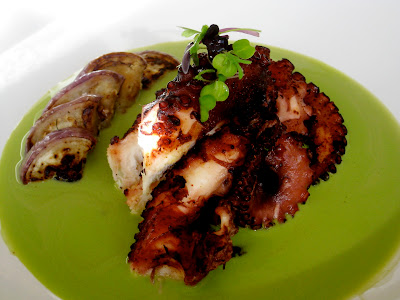 This really satisfied my octo craving - and it was pretty simple at that. The flavors came together beautifully, and the soup was delicious! The octopus was perfectly tender and had great flavor from the initial ingredients, as well as the slight kick from the ancho chili.  This was balanced out by the light, freshness of the soup (that of which I will drink all day tomorrow - it was AWESOME).  The eggplant added a nice textural, earthy component as well. In the future I might create a puree with this or something.  That and, I plan on pulling a Rene Redzepi and creating a dish called "Octo and its surrounding environs" using all oceanic products - that would take some thought and brainstorming, and none of this on the whim malarkey! Possibly making a Beatles reference and calling the dish Octopus' Garden.
Needless to say, I love octopus, and it doesn't get much better than this.  If I had a grill, I would do that too, but braising gives the meat such a great flavor throughout that it's almost hard to part ways with.   That being said, if you ever see octopus - baby or not - at the market, pick it up immediately, and make this, lest you'll never get the chance again!
Email Post
Labels: ancho braise eggplant fennel lemon octopus watercress