We all may know that I love David Chang because I think his cooking is brilliant, and he's a really down to earth, regular guy - yet somehow, I had never been to any Momofuku restaurants, just Ma Peche (which is also delicious - I ate there entirely too many times when they first opened). Luckily, I was able to trek my way down First Ave to finally get a taste! My friend Robert, fortunately for me, is the caviar supplier  - the father of American caviar to some - to over 300 chefs and some of the cities best restaurants - Marea, Picholine, David Burke, 21, The Modern, La Grenouille, Blue Hill, etc. etc. - and the Momofuku empire to name a few.  His caviar is to die for, but that's another story in itself. Because of this, he has the ability to just swirl right into some places and not have to worry about a wait.  Thank god! He's also one of my networking guru - nothing wrong with that.

We met first at The Pierre to talk with Executive Chef Stephane Becht - the two are working together to create a special caviar and oyster tasting for the hotel - where we were able to sample some American Paddlefish from the Mississippi and Missouri rivers, Mountain Lake Whitefish form Montana, and Hackleback Sturgeon - the most sought after American caviar from Kentucky, Arkansas, and Tennessee.  All of these are outrageously delicious - they don't have as much of a salt or fishy flavor as their Russian cousins.  We tried a few cocktails as well - GinGin, with Hendricks (a mutual love of mine and Robert's), Canton Ginger Liquer, Mint, cucumber juice, and fresh lime juice.  Frankly, anything with Hendricks and cucumber gets the job done for me.  We also tried the Balck Friar's Pint, made with Gordon's Gin, Fino Sherrry, housemade cardamom and Guinness reduction, an egg white, and agave nectar.  This was tasty, although I like my drinks a bit more refreshing tasting.  The mixologist made us another gin0based cocktail that had some grapefruit segments in it - his play on the Greyhound with a twist.

Here's a fun kicker - while we were tasting all this deliciousness, Stephane gave a quiet - is that...??  As I turned around, sneakily, I noticed who he was talking about - Emeril! Of course, we decided to spark conversation with he and his wife - who happens to have the most adorable Southern accent.  Really, one of the most humble and friendly chef's I've met in a while, despite all his fame. What!

Enough of this - let's move on to Momofuku.  The place was hustling and bustling (as per usual - Friday night), and we sat right down at the bar in front of the open kitchen - my seat of choice in most restaurants, next to the bar, because you can shoot the shizzle with whoevers working.  We started with some delicious sake - dewazakura nama genshu - and the obligatory steamed buns.  I LOVE steamed buns.  I don't know what it is about them - maybe the velvety, cloudness of the actual bun that's counteracted by the crispy, greasy (not not grossly so) pork on the inside, or the crisp vegetables? I don't know, but these were delicious. 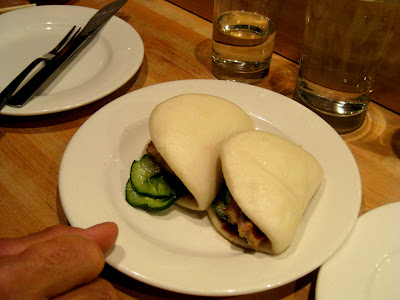 I could probably eat a hundred of these, although I probably wouldn't feel so amazing! After the buns, we finally got a chance to speak to the chefs - obviously busy! Ty Hatfield and Sean Heller (chefs de cuisine) were both there, as was Lucy Collins (sous chef) - down to earth, and chill in typical momofuku fashion.  This is when my luck started to kick in - two things on the menu that I absolutely wanted (because I'm obsessed with their main components - just wait) were sent out to us.  The holy heavens have parted!   The first was a foie gras dish - and PETA, get over it. I will eat foie gras all day if I want to, and you and your picket lines will not stop me.  Just like any product, if you source it from someone reputable, there should be no problem.  PETA, why don't you go tromp around outside of some of the big chain grocery stores that sell their chicken for $2 dollars/pound? Sounds like a better fight to me.  That being said, Senor Chang is on the same page as me - PETA in fact was protesting outside his restaurants during one of their weeklong rants, and he in fact invited it AND made sure to add at least one foie dish to each of his restaurant's menus.  Touche, my friend.  Proceeds even went towards City Harvest and Food Bank of NYC. Double touche.  Anyway, this was delicious, and not TOO skimpy on the foie like most restaurants are. 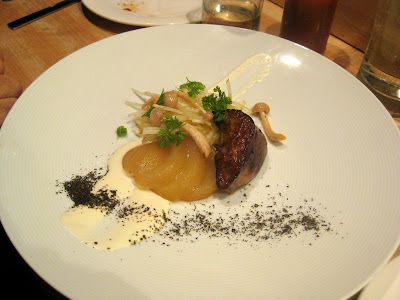 The foie was roasted to perfection (see the bit of char?! Thank you Mailliard for this reaction) - still a bit pink in the middle - with warm poached pears, hon shimeji mushrooms, and smoked tea. Foie is generally paired with a (too) sweet fruit, but the pears were perfect - they had a hint of savoriness that didn't overpower the foie gras.   The mushrooms carried out the earthy flavor, and the smoked tea, well. I'm sure you know.  Next up, octopus salad. I seriously think that I'm starting to grow tentacles. Or suction cups. Or starting to bleed squid ink. I'm not sure, but I may need to go to octopus rehab. Only after I get a few more fixes! 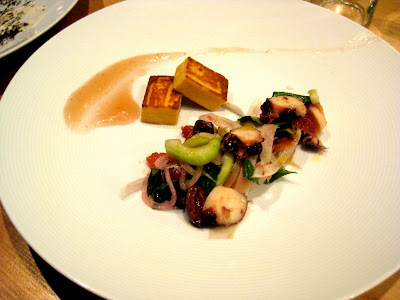 The octopus was grilled and sliced thin, served over a variety of pickled vegetables - most likely pickled in rice wine vinegar, a little sugar, salt, and some secret ingredients - mixed in with some brined olives as well (a nod to the Mediterranean - nice move).  I forget exactly was the cubes were - they seemed to be little silky smooth polenta cakes. Either way they were delicious - the sweetness worked well with the pickled vegetables and char on the octopus. 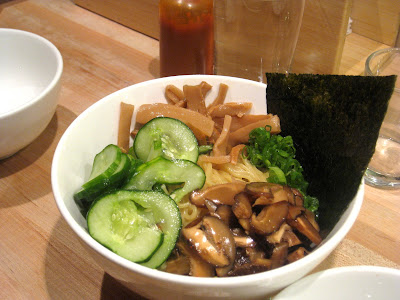 Simple, tasty, chilled, fulfilling.  This was a perfect was to end a meal that was a bit on the heavy end.  It still had a savory taste with the mushrooms, sesame oil, and menma - but almost had a cleansing effect with the ginger and pickled cucumbers. 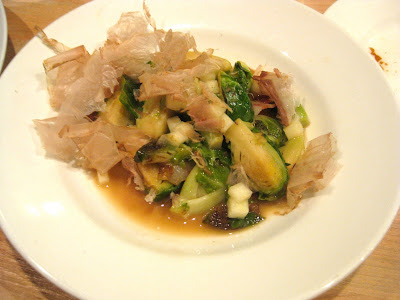 And finally, the brussel sprouts - roasted to perfection, served with little diced apples, thin slices of Benton's bacon and shaved bonito in a bit of what I think was a bonito/bacon dashi.  Again, there were a lot of savory flavors in this with the bacon, the bonito, and the dashi.  The apples added a nice textural component to the dish, a crispness both in flavor and mouthfeel.   All of the food, as expected was delicious.  Simple, true to the flavors, and prepared perfectly.  And, even though the restaurant is very sparse - outfitted in blonde woods throughout - it was a perfectly cozy meal, bellied up to the kitchen on wooden stools!  Unfortunately, either because we were full from all the food, or confused from all the sake, we failed to get dessert.  Christina Tosi makes some of the best treats in town, but I guess I have to save that for next time.  Next up for me and my Chang traversing - Ko!
Email Post
Labels: brussels sprouts buns dashi david chang foie gras momofuku noodles octopus pierre