The greatest thing happened this past Friday.  Actually, a bunch of great things happened this past Friday!  By standard Friday operating procedures, I moseyed my way down to Flatiron to get my Eataly fix in.  Fortunately, the first person I saw when I walked in was Dave Pasternak! Every other time I'd go in I would miss him by a minute - we chatted for about 45 minutes about lord knows what - food, fishing, eating, restaurants, wine - I had a delicious glass of wine AND had a tasty little bite of sea urchin (why not?!).   That, and, I was able to stump his wine geeks, talking about Oseleta.  Don't mind if I do!
But besides all that goodness, the day got even better.  While traversing the produce aisle, I saw none other than my lovely crosnes! I think the last time I had these, I was in Paris, and I was 12.  They were the most delicious thing, albeit ugly little buggers, and you can never find them anywhere! They're crisp, but not too starchy, and have a slightly nutty flavor to them - when they're cooked, the starches convert to sugars give them a bit of sweetness.  You can even eat them raw - they taste a bit like jicama, but with better texture. I decided to do a little research, and learn a little bit more about my beloved tuber.  The story unfolds as follows: the crosnes are actually Chinese artichokes (or chorogi), and are also part of the mint family.  Someone one day decided to taste test the roots of the flowering plant only to come across these odd looking things - really though, they look like grubs.  Thankfully, the French caught wind of these delicacies and had them imported to the village of Crosnes, just outside of Paris back in the 19th century - it makes sense that I was no place other than Paris the last time I had them! 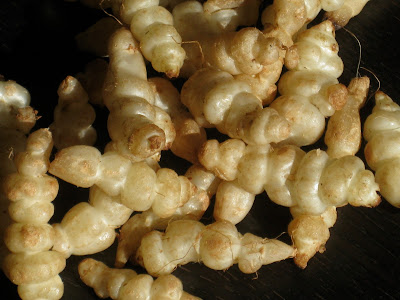 In all my excitement, I ran home as quick as possible - didn't even go to the farmer's market (!)  - and whipped up a couple batches.  For the first, I parboiled the crosnes until they were just fork tender.  It was at this moment that I had a revelation in my kitchen - and realized that I had DUCK FAT in my freezer! Lord have mercy - I knew what was in the crosnes' future at that point.  I rendered a bit of the duck fat and tossed the crosnes in, cooking them until they were just caramelized on the outside.  Finish with sea salt, pepper, and a little parmesan, and you can't ask for much more.  The taste of the crosnes transported me right back to Paris in my godmother's apartment! 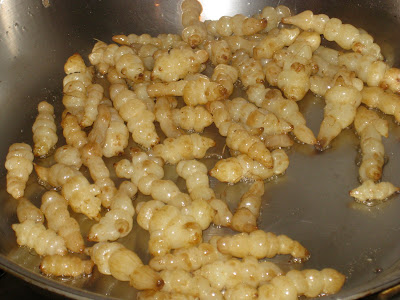 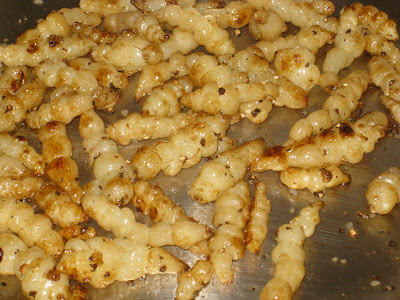 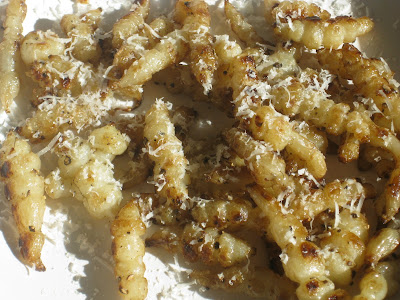 They may not be the best looking tuber of the bunch, but there sure as heck isn't anything like it.  For the second batch, I tossed them in a little bit of olive oil, salt and pepper and slow roasted them in the oven at about 275-300.  After about 40 minutes, they were beautifully roasted - again, with the slow roast, the natural sweetness and nuttiness of the crosnes really came out. Really simple and delicious.
I have a few more crosnes left and I want to experiment a little more - I may even make pickles out of them!
Email Post
Labels: crosnes paris parmesan recipe roast roasted tuber