I've been slightly delayed on my posting as of late due to the high volume of awesome activities taking place this past week - wine tastings, new restaurants, CHEFS!!  That being said, I think I'll relay some of my fun-filled week! First and foremost, I met two of the most amazing chefs in the world - literally. Rene Redzepi from Noma in Copenhagen, Denmark, which was named Best Restaurant In The World just this year, and Heston Blumenthal from The Fat Duck in Bray, England, which was named Best Restaurant In The World in 2005.  Both of these chefs are absolutely inspiring in what they do - they truly love food and cooking, and have great respect for the ingredients.  Both chefs use for progressive techniques in their cooking that truly make them unique.
Let's start with Rene! First of all, his father is Yugoslavian, so clearly, I have some sort of connection there.  He never really aspired to be a chef, and just decided to go to cooking school one day with a friend of is (thank god he did!) and ended up seeing what some of the world's greatest chefs were doing, and simply fell in love with it.  From there he was able to work in some of the greatest restaurants in the world - The French Laundry and el Bulli among others.  After a few years apprenticing and staging, he was approached by a man named Claus Meyer to open up a new restaurant in a warehouse in Copenhagen - and the rest is history.  Rene has a true respect for the land, ingredients, nature, and everything about it.  He'll forage in the dead of winter in Scandinavia to see what is available - and he only uses ingredients he can find in season, in the area.  He's made dishes out of ingredients such as cloudberries, reindeer, bulrush, lumpfish, unripe strawberries and other such things that most are unfamiliar with.  When he finds a new ingredient, he tastes it raw, all through various stages of cooking to find the exact point of perfection.  He plates ingredients that grow near each other, and even pairs meats and fish with different things that are in their own diets.  The great thing is that he not only creates outrageously delicious and beautiful dishes, but he also has a little humor in his dishes as well.  I would absolutely die to go to his restaurant.  Just take in the following (courtesy Noma Cookbook):
Langoustine and Sea Flavours - langoustine, oyster emulsion, and dried dulse 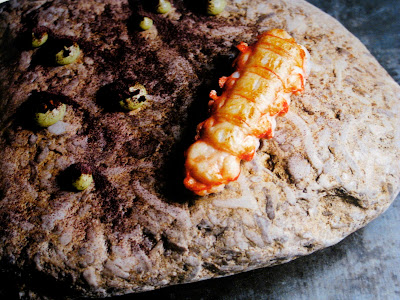 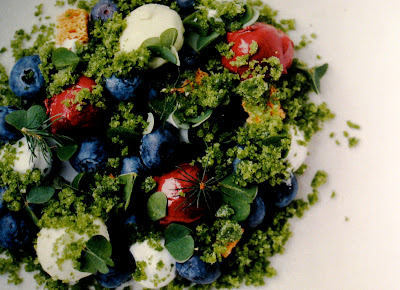 Vegetable field - made with perfectly cooked vegetables, but most entertaining, with malt soil (more on that later!). A person who tried this said the soil was the best part, and that people would just leave it sitting there because they didn't know what to do with it! 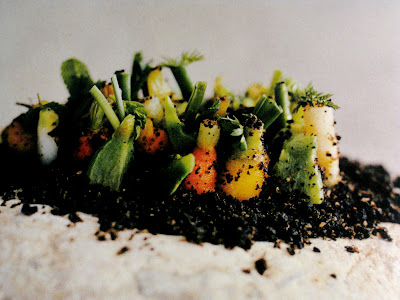 Snowman! This is made of Sea buckthorn mousse, carrot sorbet, yogurt glace, meringue, and yogurt snow. Seriously? The greatest thing I've seen in a while. 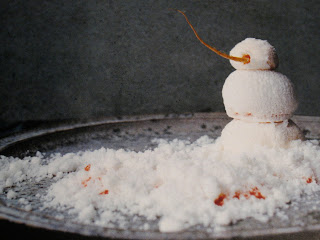 Yes, please. I was able to meet him at Williams-Sonoma in Columbus Circle, where surprisingly, there were not too many people.  Fortunately for me and my sad state of affairs of NOT living in Copenhagen, he gave out a taste of a few items on his menu as well! Simple, but amazing - a Sorrel Granita, and a Beetroot Flødeboller: 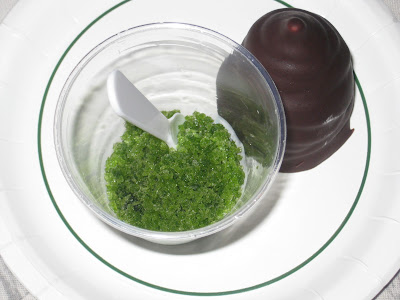 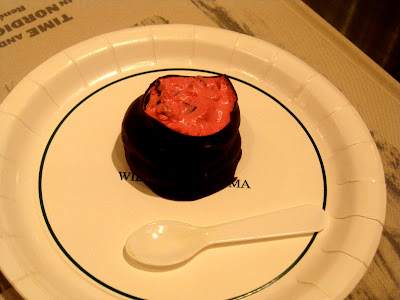 The sorrel granita was absolutely amazing - just slightly sweet, but still with that sharp sorrel taste. I could eat a bucket of it! And the flødeboller, which is a traditional Danish treat - usually marshmallow over a biscuit, dipped in chocolate - but in this case, it was made with beetroot meringue, beetroot gel, and malt biscuits. Fluffy and delicate. Delicious. Beets, bears, battlestar galactica. 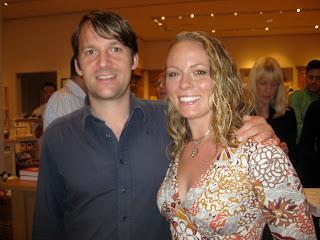 Of course I took it upon myself to bother this kind man about his malt soil.  Where do you even devise of something like that? Trial and error? A mistake? Lo and behold, the good old mistake.  Apparently a chef was making a dough without enough moisture in it and left it overnight, creating a crumbly but still soft mixture that tasted heavenly.  When he and his chef tried this leftover mishmash, they knew they had to do something with it! So began the tests of creating the perfect "soil".  Eventually, they settled on a two-day process that really hit home - if you've ever gardened or frankly, played in the dirt, you can imagine how it feels - texture, color and everything.  It's a bit dry, but still chilly and a little moist.  Yes, our lunchladies were able to create those little cups of worms in oreo "dirt" but that comes nothing close to this! I really want to try to make it. On a side note, I decided to visit my friends at Per Se, since it was just upstairs - probably the best idea I ever had.
On to round two! Heston Blumenthal! I was fortunate enough to have dined at the Fat Duck back in 2006 when I was living in London. It was one of those last minute cancellation situations (thankfully) that allowed me to get in.  The restaurant itself is everything Heston wants in a restaurant - he told a story of a three-star restaurant in Provence he went to with his family when he was younger, and how he remembers the way the gravel crunched under his feet, the starchiness of the staffs apron, and how the cheese cart was like a chariot - all these little details that went into making the experience.  Going to The Fat Duck is similar, at least for me.  We took a train from Paddington Station through the English countryside - once we got to Bray, we had to find our way to the restaurant through cobblestone streets that were crooked and unlevel.  The space itself was small, but homey -  there were low giant beams inside the country home-like restaurant.  I remember the wine list being slammed (not literally) down on the table - it seemed like it was 1,000 pages long, and the biggest book I've ever seen!  The setting really makes a difference in the dining experience.  His cuisine goes along with his fantastical setting - tastes, flavors, textures and ideas that trick your mind while you're eating.  One of his most famous dishes is "Sound of the Sea" - a small dish made up of edible "sand", oysters, urchin, different fish, seaweeds, and most surprisngly - an iPod inside a conch shell. While eating the dish, you listen to the sound of the ocean and seagulls - an experience that has even made some people cry.  He has even mate nitro-scrambled eggs and bacon ice cream. Craziness.  Although most of the descriptions (minus the previous) seem pretty standard ingredients wise, it's how he uses them and how he restructures each ingredient into something completely different that makes it special. These are some dishes from my time at the Duck, among many others!
I wish I had a picture of the freeze-dried parsnip cereal with parsnip milk, which came in its own box (which I still have) and was absolutely fun to eat. Anyways, it was great to hear Heston speak about food and the science behind what he does - he was recently named one of the UK's top scientists...seriously! 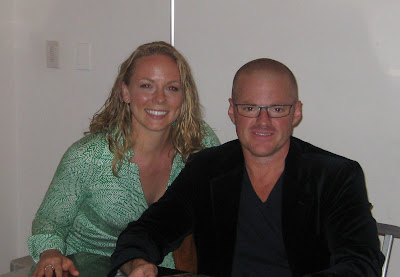 Obviously excited.  And obviously a fantastic week. I couldn't ask for more than to be able to meet and speak to both of these chefs - a great experience!
Email Post
Labels: fat duck heston blumenthal noma Rene redzepi