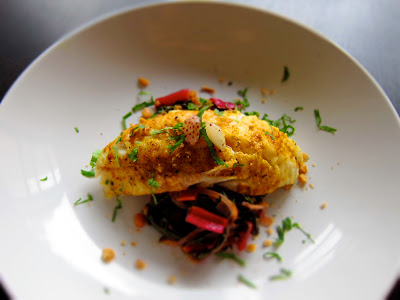 For some reason, I don't often cook with Swiss Chard. Why? I really have no idea.  You'd think I would love it, considering the ridiculous amount of stalk-colors available! (We all know my obsession with bright colors.) Not to mention, they produce some amazing micro greens.  What's that you say? Swiss Chard micro greens? But of course.  Beautiful little neon baby chards - something I only became aware of via the most recent catalog from Johnny's Selected Seeds. Amazing! And yes, I live in New York City, and receive a seed catalog. So what? A girl can dream, can't she?

Either way, after researching a bit more about Swiss Chard, I came to the realization that it is just the veg/leafy green I've been looking for! Let's take a step back: I love beets, but more importantly, I love beet greens...but sometimes I just don't want to deal with the beet itself!  Fortunately, some farmers at the market will let me take the greens that other customers 'disposed of' for free, but those guys aren't there all the time.  Well, swiss chard kind of looks like beet greens, no? WELL, let me tell you something.  While flipping through my 1968 copy of  A World of Vegetable Cookery - I found out the following: 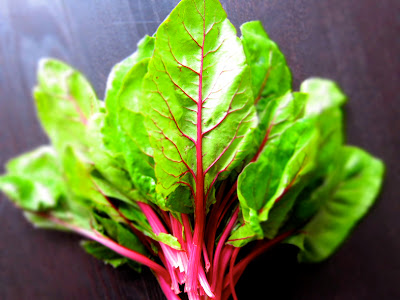 "Chard is usually applied to a special form of a variety of the common BEET, and describes a vegetable with large tuffets of unusually vivid bright green foliage, the midriffs and stalks of which are conspicuously large. It is also known as Swiss Chard or SEA-KALE BEET. In other lands, just to confuse things further, Chard is sometimes synonymous with the beets that are grown particularly for their edible, abundant leaves, or even ornamental beets with showy varicolored foliage."

Well, that's enough to convert me.  Looks like there's more sea-kale beet in my future! I also found some interesting little goodies at the store as well - pineberries! Of course, I can't resist something I know absolutely nothing about. They seemed to me as if they were just albino strawberries, but I had to know more about this mysterious fruit. Well, it turns out that this is a South American fruit that looks like a negative of a strawberry, and tastes like a pineapple! Weird, yet somehow exciting.  And pretty.  Supposedly, these little fellas almost fell into extinction a bit less than a decade ago until some Belgian farmers decided to swoop 'em up and start growing them.  Who knew! 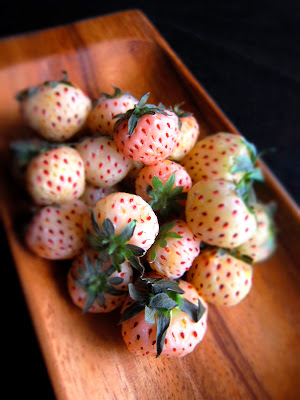 All in all, I wanted to do something with all my goodies.  I could've gone the obvious route with the pineberries and made a dessert.  And I could've just made some kind of soup, or something with the chard, but why not put them together!? I remembered a West African "stew" that was comprised of kale, pineapple, and peanut butter among other things.  Yes, it sounds like the most ODD combination of all time, but it works - I decided to play a bit with it, and the results were well worth it!

To start, prepare the chard.  In a large saute pan (I used a cast iron skillet), heat up the olive oil over medium heat.  Allow the oil to start shimmering, and toss in the garlic and onion, stirring often.  Cook for about five minutes until the onion starts to brown.  Toss in the crushed red pepper and Tabasco, and stir to combine. Next, toss in the pineberries, stirring constantly for about 2 minutes.  Some liquid should release from the berries - allow this to reduce.  Finally, toss in the swiss chard.  It will look like a lot, but like most greens, it will cook down like crazy! Gently stir, and/or turn over the chard, so it all cooks evenly - about 5 minutes. Once the greens have cooked down, season with a bit of salt and pepper and stir to combine.  Finally, toss in the peanuts and cilantro, cooking for a few more minutes, stirring constantly.  After about 2 minutes, taste for seasoning, and add more salt or pepper if necessary.  Turn the heat to low and keep warm.

In the final cooking minutes of the chard, begin cooking the fish.  Make sure to take the fish out of the fridge at about the same time you start cooking your chard, seasoning it generously with salt and pepper.  In a nonstick saute pan, heat up about 3 T of grapeseed oil over medium-high heat, until it shimmers.  Right before you place the fish in the pan, sprinkle both fillets evenly with curry powder on the flesh side.  Gently place them into the pan, flesh side down, and cook for about three minutes, until a golden crust has formed.  Flip, and continue to cook on the skin side until just cooked through, only a couple more minutes, depending on the size of your fillets.  The fillets I picked up were relatively small, so they cooked rather quickly! 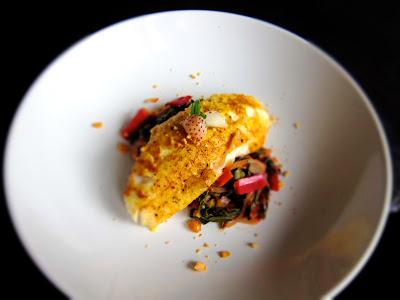 To plate, divide the chard evenly between two plates.  Set one fillet atop each mound, sprinkling each with peanuts (you can toast the peanut garnish if you wish!) and more chopped cilantro.  If you have some more pineberry or pineapple, by all means place that on top as well! 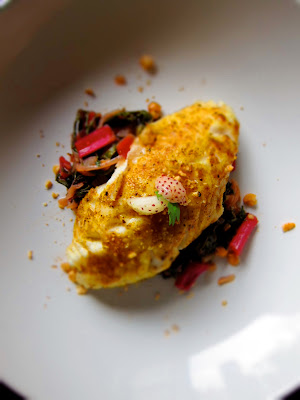 As strange of a combination as this may sound, it is absolutely delicious! You get a great earthy flavor, not to mention color, from the chard that is given a nice subtle kick by the Tabasco and crushed red pepper.  The berries definitely add a sweetness, but it's balanced out by all the other ingredients.  The peanuts and cilantro pull this whole dish together - mostly the cilantro, since it adds a nice brightness to the dish as a whole.  As for the fish, the curry seasoning brings it all together with the chard saute, and it's delicate, flaky flesh is definitely not dominated by all of the flavors. Overall, a beautiful and delicious dish that stimulates all the tastebuds! 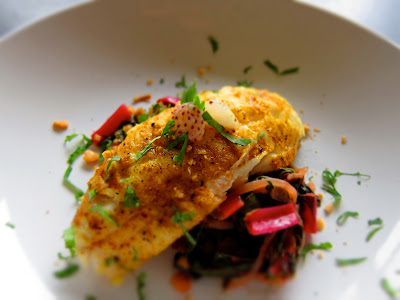