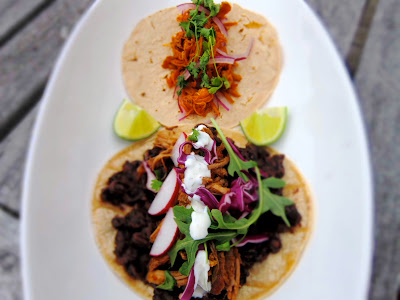 Well, I apologize in advance because this is quite the labor and time intensive dish, but the results are heavenly.  I also failed to take as many pictures as I wanted to, but hey - it was family time, I was distracted! In honor of Memorial Day weekend, we decided to make tacos! Yeah, I know, that doesn't make sense, but these are just too delicious to pass up...and if you have some extra time to cook while hanging around, why not go for it? In all honesty, we did have some All-American treats over the holiday weekend...mainly the best fish sandwich in the universe (true) from Keyhole Bar in Mackinaw City.  Lightly-battered, just-caught, Lake Michigan whitefish or perch.  Then a little (read: a lot) local smoked whitefish spread. Holy fresh water fish, Batman! Maybe it's a bit more Michigan centric, but it's all patriotic to me!

Anyway, back to the tacos.  They are adapted from Cindy Pawlcyn's book Big Small Plates - and they are one of her restaurant's most popular dishes, for good reason.  These guys are made with rabbit - although you can use chicken if you have no access to the former - and they're slowly cooked in an amazing, chile paste-based broth.  The accoutrements make the tacos endlessly enjoyable! And, as you can see from the photo above, there was not one taco filling, but two! The second is a great recipe from Food & Wine magazine for Beer-Braised Turkey tacos.

As I mentioned, this recipe has a lot of steps to it! A lot can be made ahead of time, and most of the toppings can be made while the rabbit it braising, so be sure to keep that in mind! If you're like me, you'll have a billion pots and pans going at once.  I know that in my little NY kitchen, and can't multitask to the same level as usual, so it's best to have things ready ahead of time.

As per most taco SOPs, set this up like an assembly line.  Pile it on however you want, although it seems easiest to spread the beans on the tortilla first (all the way to the edges), then top with the remaining items and a squeeze of fresh lime.  The beans kind of help glue the whole situation together.  Feel free to add a queso fresco or feta to this if you wish - a nice, crumbly cheese would be best.  Get crazy - taco toppings are endless!

Altogether, the flavors in this dish are stunning.  The rabbit itself is super tender from the braise, but insanely flavorful as well.  It has a deep, intense heat that creeps up on you from the chiles, but it's not over the top spicy.  Any spice there is definitely gets cooled down by the slaw and the lime greek yogurt.  The beans add a great earthy flavor, and a nice smooth base to the taco in it's entirety.  Yes, this recipe has a lot of steps, but it is definitely worth it in the long run! Also, the chile paste used with the rabbit is so good that you could make a huge batch of it and use it with roasted vegetables, pork, chicken, you name it. Totally worth it! 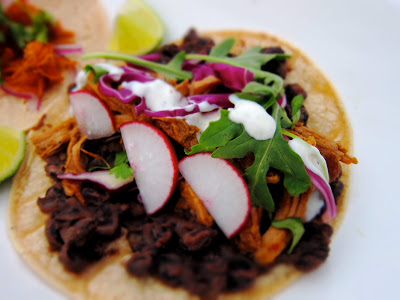 For the chile paste, toast the chiles directly over fire or in a pan until aromatic.  When they've toasted and even blistered a bit, put them in a small pot with just enough hot water to cover. Soak the chiles for 1 hour until soft.  Drain the chiles, ensuring to reserve their liquid. Puree the chiles in a blender along with the garlic, oregano, cumin, salt, and pepper until smooth.  Slowly add some of the soaking liquid as needed, until the paste has reached a relatively thick, viscous consistency. Strain and reserve.
Chile-Braised Rabbit
2 to 4 T olive oil
6 whole rabbits, cut into 8 pieces.  You can break down 2 chickens in the same manner
1/2 t salt
1/4 t freshly ground black pepper
1/2 C celery, chopped
1/2 C carrot, chopped
1/2 C onion, chopped
3-4 C chicken stock

To cook the rabbit, heat the oil in a heavy-bottomed stock pot over medium-high heat. Season the chicken generously with salt and pepper, and cook until nicely browned on all sides. You most likely will have to do this in batches. Transfer the chicken to a platter. Next, add the celery, carrot, and onion to the same pan and cook until browned. Stir in the chile paste, and cook for about a minute, stirring constantly, allowing the flavors to meld together. Add the rabbit back to the pan and stir to combine. Pour in just enough stock to cover and bring to a boil. Reduce to a simmer and cook until the meat is very tender, about 40 minutes.

Remove the meat, and set it aside to cool. Strain the broth into another pot, bring to a boil, and allow to reduce by half, until it is thick enough to coat a spoon. Next it's ready to get to some rabbit- (or chicken-) pickin'!  P.S. Paula Deen claims to be the best chicken-picker this side of the Mississippi.  I dare say that I may challenge her.  *Ahem*.  Anywho, make sure to leave the meat in relatively large pieces, because it will break down further once you reheat it.  Add the meat to the sauce, stirring everything to combine, and cook just long enough to heat it through. 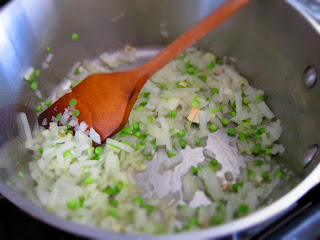 In a large saucepan, heat the oil over medium heat.  Cook the onion and garlic until just translucent.  Add the cumin and chili flakes and stir to combine.  Next, add the drained black beans, adding in as much chicken stock or water to make them saucy but not watery.  Give a quick stir and cook for about 20 minutes to allow the flavors to all come together.  Keep an eye on the pot, stirring frequently, adding more liquid if necessary.  To finish, blend about 1/3 of the beans with enough liquid to make a thick paste.  Stir it back into the beans and season with salt and pepper. *Be careful here! Some canned beans are super salty, so be sure to taste as you're seasoning!* To make it easier, you can also simply mash some of the beans in the pot itself. Finish by removing the beans from heat and stirring in the cilantro.

Combine all the ingredients in a bowl, stir to combine, and chill until ready to use.

For the vinaigrette, I like to use the good ole' jar method.  Place everything in a small glass jar and shake like the dickens.  Continue until it is nice and emulsified! You can also use a mini food-processor, stick blender with a whisk attachment, or just straight up hand-whisk it.  Either way!

At the last moment, toss all of the shrubbery together with enough vinaigrette to coat. 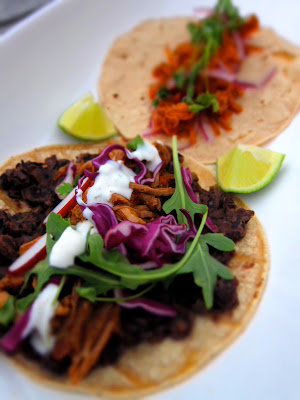