Worth it's weight (and wait!) in salt 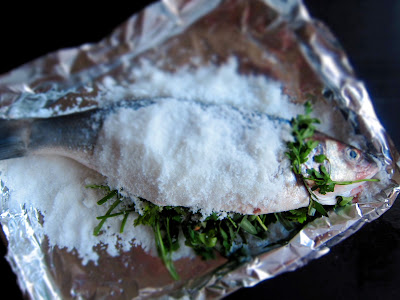 If you've never salt-baked a fish, you are missing out! This is such an amazing way to prepare fish, it's a wonder that more people don't take it upon themselves to cook this way.  Not only is it superbly easy, it's fun - cracking open the salt crust may be the best part! You know what it's like? Kinder Surprise.  But better...because you end up with an awesome whole meal and not a cheap plastic toy! (Side note: I am not hating on Kinder Surprise.)  This recipe combines a variety of delicate flavors that come together harmoniously at the end, and is perfect for springtime. Mint, tarragon, parsley, and lemon - a wondrous combination!  Salt baking any fish is fun, but I especially love preparing branzino this way - one of my favorite sea swimmers. So go buy a big box of salt, and get cooking! 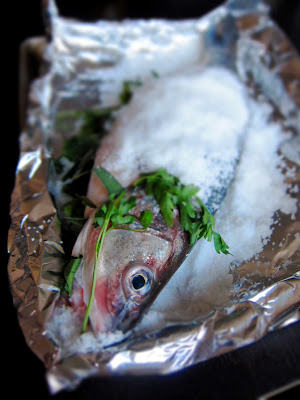 Preheat oven to 400°F. Place salt in a bowl and add egg whites 1 at a time, stirring, until the mixture is the consistency of wet sand - just enough that the salt holds together when packed.   On a large rimmed baking sheet big enough to hold the whole fish, line with foil and pat about a half cup of the salt mixture down.  Place a few rounds of lemon on the salt right were the fish will be laid down, and drizzle with a big of olive oil. Place the fish atop the lemon rounds, and season the cavity of the fish with sea salt and ground pepper.  Next, stuff the garlic, a few more slices of lemon, and as much parsley and tarragon as you can squeeze inside.  Don't skimp on the herbs here - you really want the flavor to come through after baking! Drizzle with a bit of olive oil.  Firmly pat the remaining salt evenly over the entire fish, enclosing it on both ends.  Bake the fish in middle of oven until the salt has turned golden at edges, about 35 minutes. 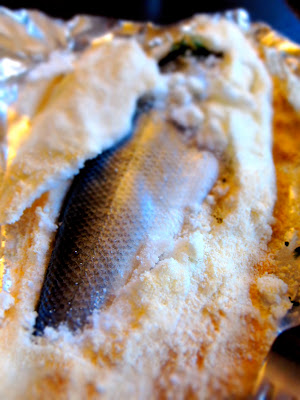 Now for the fun part! After removing the fish from the oven, crack the salt away from fish and discard.  The salt will be very hot, so be careful!  Carefully fillet the fish, remove any bones, and get ready to plate.  Don't forget to eat the fish cheeks - they're the best part! 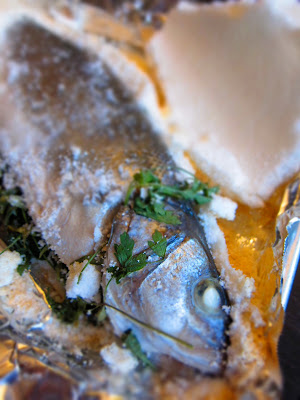 Just before the fish comes out of the oven, make the snap peas.  In a large saute pan, heat up the olive oil over medium-low heat.  When it's shimmering, add in the shallot and cook until lightly caramelized and golden brown.  Add the snap peas, and toss to coat with olive oil. Cook the peas until they are just heated through and crisp-tender. Remove from heat, and toss with the mint leaves.  Taste and season with sea salt and fresh black pepper. 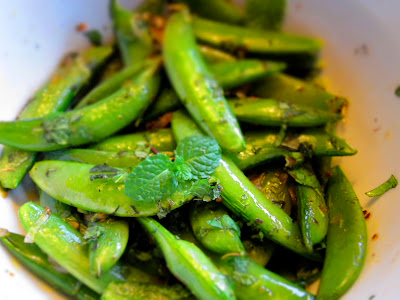 To plate, divide the snap peas evenly between the two plates.  If you're OCD like me, line em up! Place a fillet atop the snap peas.  Zest the remaining lemon over each plate, cut in half, and squeeze a bit of lemon juice over each as well.   Season with a drizzle of good olive oil, a pinch of sea salt, and a quick grind of black pepper.  If you have Maldon, by all means use it! It adds a great crunch and explosion of flavor.  Dig in and enjoy! 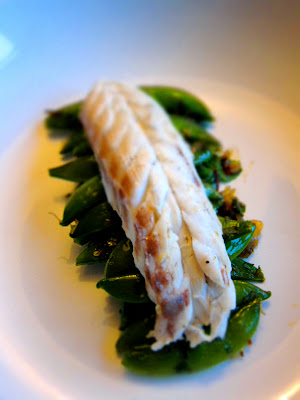 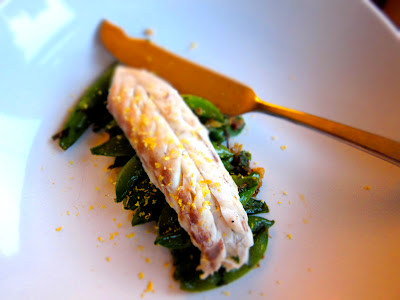 This is such a simple preparation of fish, and is essentially fool-proof.  The salt crust captures all of the flavors in the cavity of the fish, and allows the fish to not only bake, but quasi steam itself, lending to an amazingly tender and flavorful fillet.  The snow peas pair perfectly with this fish as well - they are delicate in flavor, and add a nice pop texture-wise.

Haydn and Kristy @ Taste Buds said…
Well, now I just feel guilty for not doing a fish like this. I grew up fishing my whole life and have never tried this. I think its time to pick up the trout rod and snag a few beauties to try this recipe out on.

Epidemic Kitty Kat said…
Do it up, do it up!! This cooking method is such an oversight because it seems so...plain? But it's amazing. Every time I cook like this I have to slap myself for not doing it more often!
May 9, 2012 at 12:13 PM

l31bgk3me2 said…
Insurance is elective and additionally be} in any amount up to as} one-half the unique bet. If dealer does have blackjack, the profitable insurance coverage bets are paid 2-1. Players lose the unique bet on their arms unless in addition they have a blackjack and push with the dealer on the unique bet. The most up-to-date main growth in backgammon was 토토사이트 the addition of the doubling cube. It was first introduced within the Nineteen Twenties in New York City among members of gaming clubs within the Lower East Side.
January 23, 2023 at 3:46 AM