boar hunting in the city 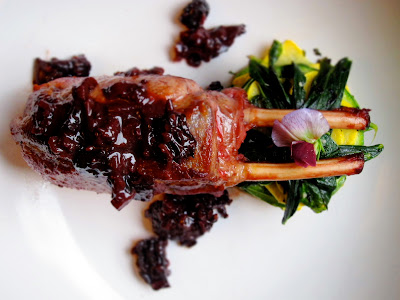 What started off as a leisurely Sunday - one of the first Sundays I've had off in a long, long time - ended up being an amazing roving feast of deliciousness.  Between being caught up in the act of my new gig and the excitement of a restaurant opening amongst other things, I had all but forgotten about the glories of NYC pre-summertime.  Food crazies like myself run this city! Events, markets, and fairs abound.  Restaurants are getting out of their winter, root-vegetable rut.  Everyone's excited - it's like a scene out of some old-school Disney movie or something.

That being said, I wasn't keeping up to speed with what was going on, and was pleasantly surprised to be reminded of the Big Apple Barbecue.  Now, I'm one for any event where the top 'whatevers' come in from around the country to make something, and I knew that this situation would be a treat.  Don't get me wrong - I LOVE me some barbecue, but I mainly wanted to partake in some GOOD OLE PEOPLE WATCHING!  I also know that events like these (free admission, pay per plate, whatever) generally lead to mass chaos and lines and crowds more intense than a sea of teeny-boppers going to see Justin Beiber - minus the riots. So if we wanted to actually get a few tastes of food while partaking in social anthropology, an early rise was a must.  And arrive early we did.

You could smell the smoke from blocks away - some people brought industrial-sized, gleaming towers of beauty to show off, while others stuck to their good old, jury rigged junkyard-scrap smokers...I'd say those have a bit more character. Speaking of smokers, overheard by a rotund, Fu Man Chu'd, drawl-speakin, rib-slangin, pit master, "I need another smoker like Ray Charles needs drivin' lessons!!" Silent joy.  While essentially devouring pulled pork sandwiches, finger-lickin good ribs (Pappy's took home my prize for the best), brisket, and cole slaw among other things, we sure were able to overhear some conversational gems - along with somehow feeling like we had been in a time machine and ended up at Cedar Point circa 1993.  I've not seen so many Nascar shirted, Nugent-hat wearing, NRA types in quite some time! There were no Occupiers to be found.  I had to wonder where they all came from. I also remembered why, although us restaurant types complain about not having weekends off...having a weekend day off is horrendous because of the HOARDES OF PEOPLE that emerge from who knows where like NYC rats out of the sewers!

I digress - the barbecue was delicious, the folk had some great Southern Hospitality, and I actually didn't feel the need to burst my eardrums while listening to country music - it was only appropriate.  If only they had some Pit-to-Plate from Cincinatti, Jack's Barbecue from Nashville, or maybe even some Zingerman's from Ann Arbor would it have come full circle. Wait, wait. Definitely Slow's from Detroit. I'm being biased....whatever. Maybe next year!

We carried on the remainder of the day, met up with friends, and decided to have a dinner party.  Also, I praised the lord that I didn't know about the Puerto Rican Day Parade, but praised extra that I didn't get caught up in that malarkey.  If the PR parade isn't a sign of summer to come in NYC, I don't know what is.   So, after all that carnivorous fare at the barbecue party, you'd think I would opt for something light and vegetarian.  Maybe it was all the iron coursing through my blood, but I needed more MEAT.  Sorry vegetarians and vegans....it's true.  BUT, part of the coming recipe is in fact vegan, and extra delicious on it's own.  Don't fear - you know I got you!

While making my rounds at my favorite store - yeah, you know which one. Eataly. Fine - I had grandiose visions of what to make for dinner.  Maybe spicy Vietnamese lamb burgers - they'd be epic using Albion lamb.  Probably some Scallop crudo on the half-shell with tangerine olive oil and some pink peppercorn.  Oh, how delightful!  But then ALONG CAME CINGHIALE. (Kind of rhymes with Polly.) That's it. A beautiful rack of frenched young boar sat right in front of me, and all of my plans were 100% scrapped.  Mind you, every time I see boar, I think of Eric Ripert going boar hunting in Italy. I want to go to there. It's not every day that you come across this, so I was in like Flynn.  To the checkout counter! 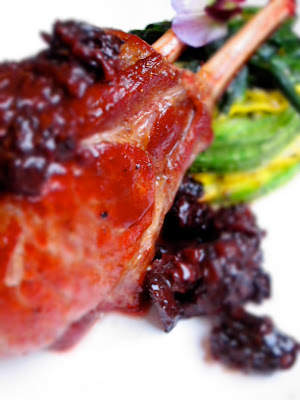 For the morel reduction, place a small saucepan over medium-low heat, swirling in a couple tablespoons of olive oil as the pan heats up.  Once the oil is shimmering, add the garlic and shallot, stirring occasionally.  Cook until the onion is translucent, only a few minutes.  Next, add in the morels and thyme leaves, allowing the mushrooms to become a bit tender.  Pour in the wine, stir to combine and bring to a boil.  Cook for a few minutes until adding the stock.  Bring to a boil again, then lower to a simmer, allowing the mixture to reduce down until you've achieved a thick, sauce-like consistency that coats the back of the spoon.  Give the sauce a taste, and add sea salt and pepper to taste.  Keep warm. 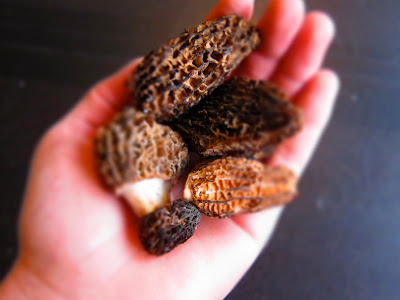 While to sauce is reducing, you can start cooking the boar.  If I had a grill, I would have by all means used it! But alas, I do not.  Go for it if you do though! Instead, I used a cast iron pan to give the chops a nice sear. Be sure to take the chops out of the fridge well before you start cooking so the chop get close to room temperature.  You never want to cook a cold piece of protein! Season the chops generally on all sides with salt and pepper, and prepare your pan for cooking! Heat the pan over medium-high heat.  If you're using a big cast iron pan, this could take a while - so plan ahead.  Allow the pan to come to heat, swirl in a few tablespoons of olive oil, and gently place the chops in.  I started off 'skin-side' down to render some of the fat.  Cook until golden brown, about 4 minutes, and repeat with all other sides.  I wasn't finishing my chops in the oven, so I seared all four sides. It depends on the thickness of your chop, but it should take no longer than 20 minutes to achieve medium-rare.  And yes, you'll want these chops at a medium rare! Although it is technically "pig", it's a wild pig that is leaner and gamier than our standard farm pig that can be eaten without being well-done.  Thank the lords for that!  Cook until the center reaches about 135-140F.  Remember, the meat will cook a tad bit more while resting, so don't overcook it.  Let the meat rest for at least 15 minutes.

For the summer squash: Now is the perfect time to get your squash on! I picked up some patty pan, zephyr, and magda and was ready to go.  I also picked up a bunch of fava leaves - again, this is me picking up something I'm unfamiliar with in the kitchen.  Obviously from the fava plant - I didn't know you could eat them, but I guess...why not? I was told you can eat them in salads or sauteed up and taste distinctly of favas.  I could tell as much just from smelling them! All the flavor, half the hassle? I'll take it. Mind you, the fava leaves are totally unnecessary, but were a fun addition.  You could use actual favas if you have them on hand, but otherwise just omit that situation all together. 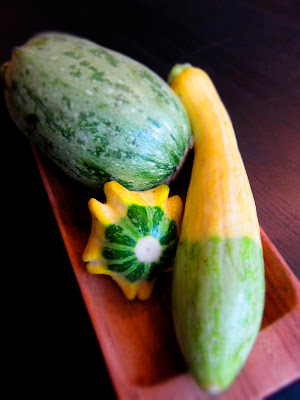 In a large saute pan, heat up a couple tablespoons of olive oil over medium heat.  Toss in the squash and saute, stirring occasionally.  Being summer squash, they do have a high percentage of water - if you had the time and wherewithal prior, the slices can be salted and drained.  Otherwise, if they're releasing a lot of water, just try to boil it off.  Allow the squash to cook for 5-10 minutes, depending how thick you sliced them, until they are super-tender and have browned just a bit.  With a couple minutes remaining, add in the fava leaves (if you have them!). Cook until wilted. Remove from heat, and toss with the minced mint (say that three times), a little bit of fresh ground pepper, and salt to taste.  Keep warm to plate.  If you make a bunch of this, it is also delicious served cold.  Extra refreshing! 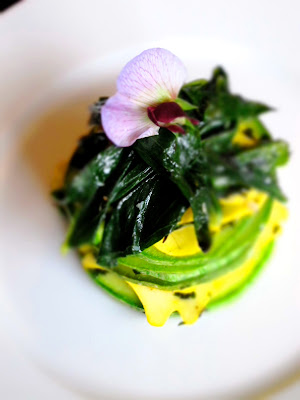 To plate, make a nice stack or pile of the squash.  The necessity of building a tower really just depends on your OCD-ness of plating.  On a scale of 1 to 10, I'm at about an eleven.  Place the chop next to the squash, or on top, and finish with a bit of the morel reduction.  If you want to cut the chops ahead of time to show the interior of the meat, you're more than welcome to do so! 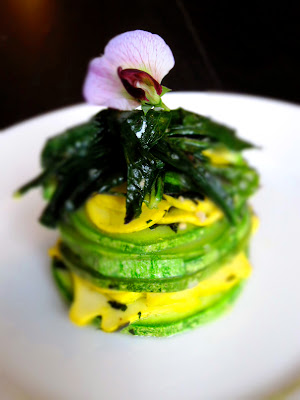 I'll tell you, the boar was all I hoped and dreamed of! As stated before, it is technically pig, but it has a lot more flavor to it - but definitely not as much as a lamb, or any other true red meat - and it was wonderfully tender.  The morel reduction brought out the earthiness of the boar, while the summer squash helped lighten the dish as a whole.  Eaten on it's lonesome, the minted squash is to die for.  It's ridiculously simple, and I could eat a thousand pounds of it.  And those fava leaves! Seriously. They taste just like fava beans. It's weird....deliciously weird.   If you can find some boar chops, try this dish out! Otherwise, you can try it with a regular pork chop, or even go spring lamb.  The options are limitless! 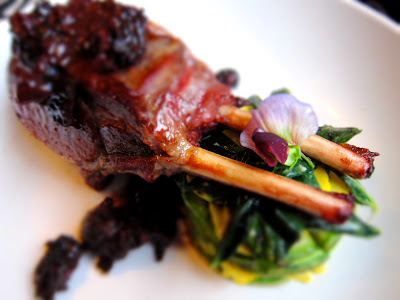