Quinoa have some more, please! 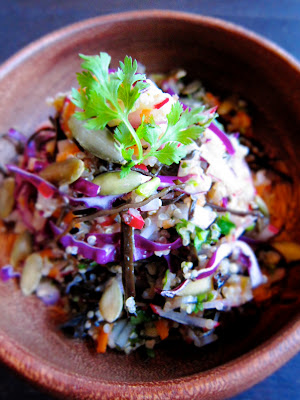 When the sun starts gracing us with it's presence for more hours of the day and summer time starts creeping in, I know it's time for some refreshing dishes. (Especially when your apartment building doesn't turn on the central air, even though it's a billion degrees outside, and you're southern exposure apartment also heats up to about a billion.  I'm looking at your BUILDING.)  Seriously, my coconut oil became 100% liquid.  But I digress - refreshing foods it is!  And this following recipe is not one to sneeze at either - it's absolutely to die for.  Even your friendly meat and potatoes fellows will gobble it up!  That being said, let's get into it.

This quinoa salad may definitely be an oldie, but it's for darn sure a goody! This used to kind of be a staple salad in the house - made in huge batches to keep around for a quick snack or accompaniment to a more composed meal.  That being said, even when it's made in huge batches, it goes QUICKLY! It's absolutely delicious, not to mention mind-blowingly healthy.  The best part about it though is that you really can do anything you want with it! Add some different vegetables that are in season - maybe some corn in late summer, or some steamed squash in the winter time.  Switch up, or better yet, add more nuts and seeds to the mix! Toast the nuts! Heck, there's no need to hold back! Point of the story - this salad is awesome.  Orchestrate a picnic, and make this salad times four!

Combine the arame with 2 cups warm water and set aside to swell for 10 minutes, until soft. Drain and set aside.

In a small saucepan over high heat, bring the 1 1/2 cups water and salt to a boil. Add the quinoa, giving it a quick stir.  Bring to a boil, reduce the heat to low, cover, and simmer for 20 minutes, or until all the water has been absorbed. Ensure to watch the quinoa when you're closing in on 20 minutes - be sure not to burn the bottom layer.  When ready, remove from heat and spread the quinoa on a baking sheet to cool. 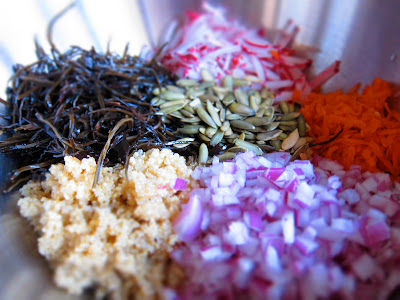 In a large bowl, toss together the pepitas, quinoa, vegetables, and arame with the marinade. Mix well and refrigerate for 20 minutes to marry the flavors. 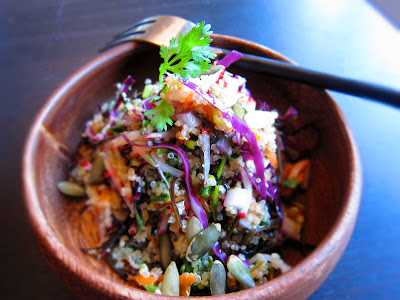 Taste for seasoning, add more salt and black pepper if necessary, and enjoy!

Seriously...SO GOOD. I'm literally eating it as I'm typing this out, most likely getting quinoa everywhere.  Really though, everything about this salad is perfect - all of the textures come together wonderfully, form the crunch of the radishes, to the slight al dente feeling of the quinoa, and a silkiness from those lovely ocean vegetables of ours, arame.  The cilantro brightens up the dish, and the apple cider vinegar add a great acidity.  If you wanted more spice, you could definitely pump up the amount of jalapeno, or if you're really crazy, toss a habanero in the mix.  That'll wake you up in the morning! 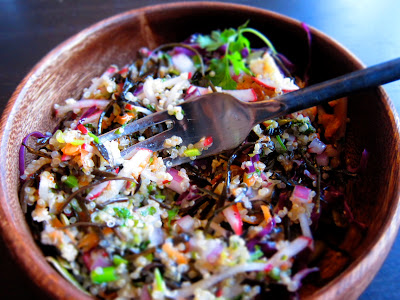