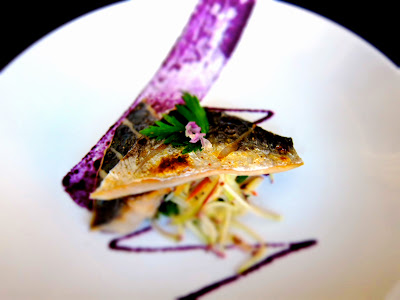 Holy mackerel is right! My favorite fishmonger had some b-e-a-utiful wild Spanish mackerel fillets today, and it was hard for me to resist.  Maybe I'm lacking Omega-3s and -6s? Hence the sudden craving? Probably not - these guys were just to good lookin' to pass up.  Fortunately, I had also picked up some various vegetables and goodies at the market that I figured I could manage to throw together to make something tasty...and possible random.  Purple kohlrabi, some Pink Lady apples (apples need to go away..it's summer! But I'm not really complaining), and baby fennel, amongst some other things I couldn't restrain myself from buying to be used in the near future. 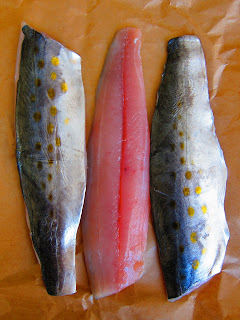 Let's talk about some Spanish mackerel. Scomberomerus maculatus.  Say that three times fast!  Scomberomorus is derived from the Latin 'scomber' translated as mackerel and the Greek 'moros' meaning silly or stupid.  Poor little guys!  I mean, I may start saying scomberomerous on a daily basis now, but that's another story.  Also, it's not really from Spain, but in fact hangs out in the Gulf of Mexico as well as along the East Coast.  Maybe the nomenclature came from a confused fisherman with the same mental un-clarity as our buddy Chris Columbus.   India? Spain? Really? Get it together guys!  The fish itself really is quite beautiful, with a shimmery, smooth, blueish silver skin, lined with rows of yellow dots.  A polka dotted fish, eh? You know it.  Spanish mackerel is ridiculously high in Omega-3s and is quite frankly...delicious.  I know a lot of times, mackerel is grouped into that "fishy" fish group, but when it's this perfectly fresh, there ain't nothin' fishy about it! That being said, let's get to the recipe. 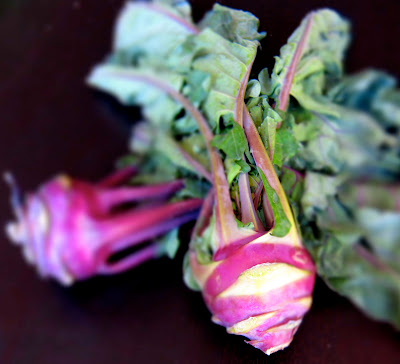 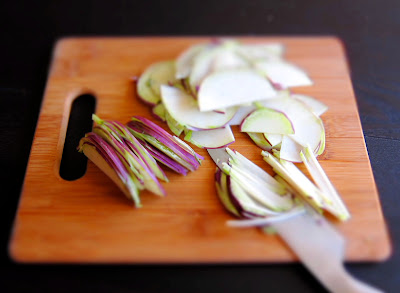 Start by making the slaw.  If you have a mandolin, by all means use it to make uniform julienne cuts.  If not, it's all good! Combine all of the sliced vegetables in a bowl, and toss to combine.  To make dressing the slaw a bit easier, you can combine the remaining ingredients in a small jar and shake it up to mix the flavors together.  Toss it on the slaw, mix well, and taste for seasoning! The dressing is REALLY light (intentionally), but managed to give a nice flavor to all of the vegetables.  Set aside and let all the flavors come together. 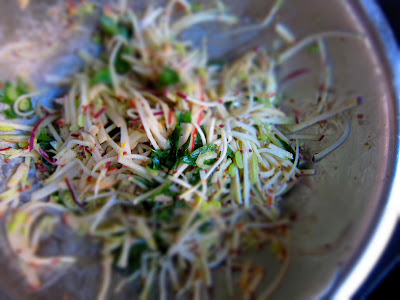 Next, hit up that cabbage reduction! I am a sucker for red cabbage...I don't really know why.  And juicing red cabbage is one of the greatest things ever! I've made Heston Blumenthal's red cabbage gazpacho by juicing the cabbage, and figured, what the heck.  I thoroughly enjoy seeing PURPLE DRANK come out of my juicer.  I tossed in half of a Pink Lady apple for good measure and made some awesome looking nectar.  Make sure to skim the foam off if you're using an actual juicer.  If you don't have a juicer, you can puree/blend the heck out of the cabbage and apple, and squeeze it through cheesecloth.  To each his own!  Place in a heavy bottom saucepan, bring to a bowl and reduce down to about 1/3 cup.  The juice will turn into a thick, perfectly sweet, stunningly delicious and beyond gorgeous purple "sauce".  No seasoning necessary.  Sidenote: I am making red cabbage reduction every day for the rest of my life. It tastes like heaven. I will be using it in a dessert soon. It's that good.  Set aside, and try not to eat all of it. 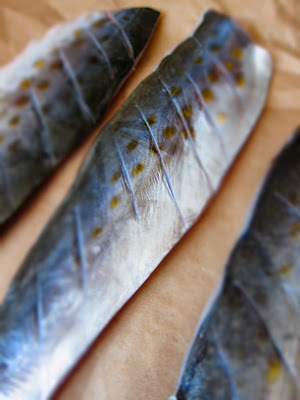 For the mackerel, first cut very shallow slits, about an inch or so apart, on the skin of each fillet.  This will stop the fillet from curling up while the skin crisps up.  Season both sides with olive oil, salt and pepper.  Heat the oven to about 350F/400F and throw that broiler on!  Place the fish into the oven, skin side up, about 4 inches from the flame.  Allow to cook until the skin is nice, crisp and browned, about 8 minutes. 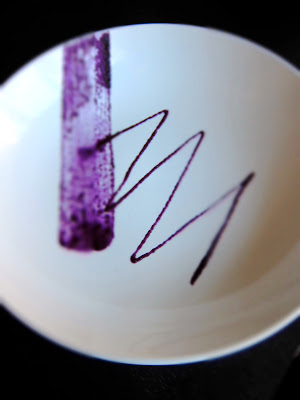 To plate, brush a bit of the cabbage reduction on each plate - have fun with it! I bought a new contraption at the store today meant for writing with frosting, but I figured I'd use it for the reduction.  Many a fun time was had, I'll tell you that much.

Divide the slaw evenly between each plate, creating a small mound.  Place one fillet (in halves) over each mound, and finish with a bit of fresh parsley leaves.  If you have extra purple sauce (term coined), by all means bring it to the table. It is SO GOOD!! 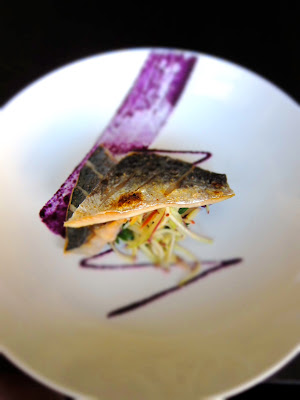 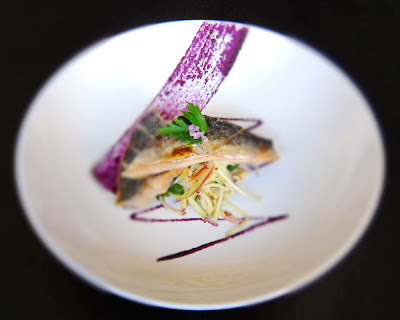 This dish not only is visually appealing, but the tastes are out of this world! The mackerel itself definitely doesn't need much more than oil, salt, and pepper - the fish itself is full of flavor, unctuous, and the crispy skin just brings it all together.  The slaw adds a nice crunch along with a bit of acidity and creaminess to cut through the flavor of the mackerel, and the sweetness of the cabbage reduction ties the entire dish together.  It adds a nice little punch of sweetness, while still allowing the flavor of red cabbage to come through.  A keeper! 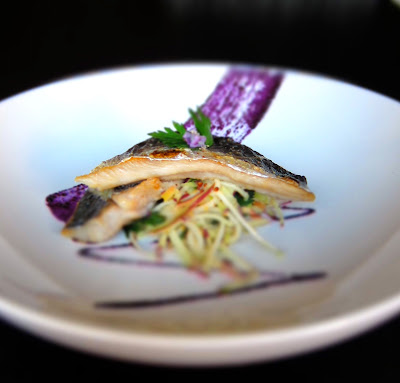