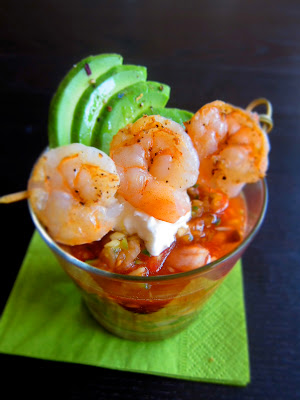 There are many a dish that could be considered perfect for summer – the epitome of summer no less.   With all the great ingredients we have, how could there not be a plethora!? To choose just one as the standout would be culinary blasphemy, I think.  But I would like to say that the following should at least be up there in the ranks, considering the ingredients that go in.  And it only tastes better at the height of summer! Simple, easy, and sadly, often overlooked.  Gazpacho! First of all, it’s a fun word to say. Second, there are so many variations on this that it’s unbelievable.  It’s like the Italian mama’s ragu – everyone has something different, but all are equally delicious.  You can make it with fruit, spicy it up a bit, puree it until it achieves a velvety texture, or leave it rustic and chunky.  This following recipe is a standard gazpacho.   Nothing fancy, no mussing it up.  Just straight forward ingredients combined to knock your socks off.  And perfect for vegetarians, vegans, and raw foodists alike! (As long as you leave the scrimps off ‘namean.) 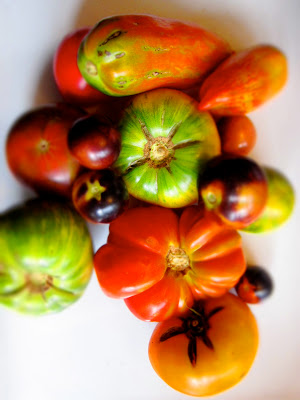 Overall though, gazpacho is a very traditional dish, originating from Andalusia in Spain - it's thought to be of Moorish/Arabic origin.  Standard peasant food. Originally, gazpacho didn't contain any tomatoes or peppers, but thanks to our buddy Chris Columbus, these were finally added post exploration. Clearly, this dish has been around for ages - and for good reason!  It’s delicious! Perfectly refreshing, and healthy for a hot summer day.  You can take it as an entrée, or a nice little pre-meal shooter.  Either way, you’ll be satisfied.

This, by the way, is my mother’s recipe.  It’s pretty epic. 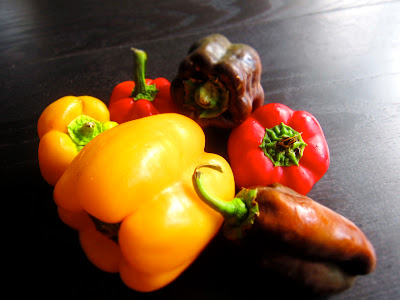 Roughly chop the first four vegetables into about a one inch dice.  Next, place each vegetable (separately) into a food processor and pulse until coarsely chopped. Make sure not to over-process.  It’s important to not pulse EVERYTHING together just for the ultimate texture and look of the dish. 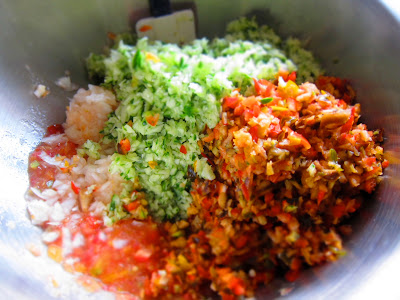 Combine all in a large bowl, and mix in the garlic, jalapeno, vinegars, lime, vegetable juice, olive oil, salt and pepper.  Mix well, taste for seasoning, cover, and chill.  The longer it rests, the better it tastes – although it tastes delicious immediately as well!

When ready to plate, you can either create an assembly line for guests, or do it yourself.  I like to place a small dollop of Greek yogurt on top, followed by some sliced avocados, a touch of olive oil, and fresh ground pepper.  If I’m feeling really fancy, I’ll add a few grilled shrimp.  Epic! 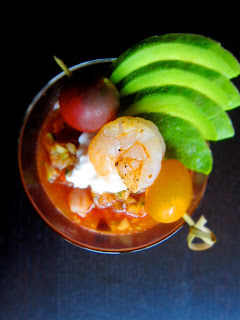 So simple, yet so delicious.  The extra step up processing everything separately really does make a difference in this soup - so don't skip it!  All of the flavors come together from letting it sit together, but somehow the separate processing procedure allows each ingredient to shine through.  In future batches, an addition of a chipotle pepper in adobo sauce could add some nice smokiness and heat - I may just have to try that out! Overall, a great summer dish that is sure to please everyone! 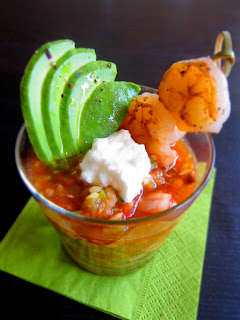