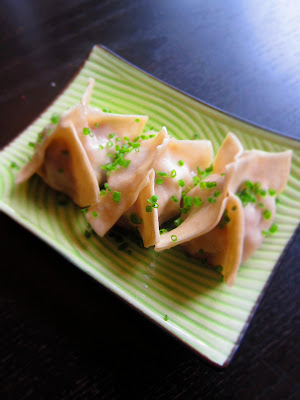 Recently, I was presented with the challenge of making dumplings for the evening's appetizers.  Well, first off, I could have been rude and just made some sort of strange Czechoslovakian dumpling (read: dough ball), or maybe gnocchi, but that would have sabotaged my evening of eating as well.  Naturally, the man was thinking about dim sum style dumplings.  But what kind?! Scrimps? Mixed meats? Pork? Vegetable!? The choices are endless...but pork it was.  Seemed easy enough.  I sifted through my newly organized spice cabinet - thank god I was having a Type-A kind of day, or else this could've been majorly difficult.  I cataloged basically every Far East ingredient that I could in my head and had myself a nice little brainstorm.  Let's be real here: dumplings are STREET food.  But, as we also know, recreating street food sometimes is one of the most difficult tasks...unless you're Susan Feniger.  (I would move back to LA just to eat at Street on a regular basis and devour multiple orders of kaya toast, but that's another story.)

Point being, street food is always simple as all get-out.  No fancifying, no upclassing, no nothing.  You gotta stick to your guns on these! Fortunately, I've had my hand in the dumpling-making process on more than one occasion.  But of course, I've ALSO never paid attention to how I was making them (typical) - so I was off to the races.

That being said, I knew there was only one brain to be picked...well, one cookbook to be sifted through, at least. Irene Kuo, The Key To Chinese Cooking.  Remember this? That happened. If you're strange like me, it's a great read - but also very resourceful for all things in the Chinese culinary compendium.  I don't know why, but I also have faith in old cookbooks like this. Thus far, this hasn't failed me, so I'm sticking with it.  But back to the dumplings!

In true form, there was no planning ahead, so I was utilizing wonton wrappers for the dough instead. Obviously one of the easiest kitchen short-cuts in the world! Next time, I'll be making 'hot-water dough' for my dumplings - the dough that almost every Chinese dumpling is made with, among other things.  The recipe is ridiculously simple, uses only flour and boiling water, and involves hardly any resting time or anything.  I'll definitely be trying it out next time.  Sadly, next time is not tomorrow! Ms. Kuo claims these wrappers are far superior to commercial ones.  Thanks for rubbing it in LADY.

Next, I read about the process of creating "shallow-fried dumplings", and the cooking process seemed A+ to me.

"Through the combined processes of shallow-frying and vigorous steam-cooking,
these scrumptious filled dumplings acquire a dual texture: they are fluffily soft on top
and crunchy-crisp on the bottom."

Seems legit! Cooking-process deal: sealed. Needless to say, these dumplings are easy to make whether or not you decide to make the dough yourself, and cook up in just a few minutes.  Fold away! 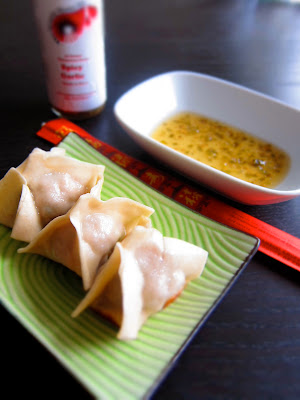 In a large bowl, combine ALL of the ingredients and mix well.  Seriously, get in there with your hands! You can only do so much with a spoon.  Once everything is well combined - this may take a few minutes - place the mixture aside and set yourself up for some dumpling making! All you need is some work space and a small finger bowl of water.  These can be made a few days in advance, and even frozen for quite some time, so don't get overwhelmed by the amount in front of you.  Once you taste them, you'll be glad you have so much! 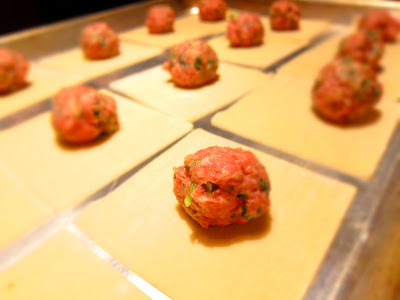 As far as making the dumplings, you have a few options as far as folding goes. If you have round wonton wrappers, you can make half moons, pleated half moons, or even open face dumplings (like shu mai).  With square, you can simply fold them over into a triangle, fold them twice to make a sort of tortellini shape, or do as I did and make a nice little house looking contraption.  I'm sure there's a name for it - but I'm not sure what it is.  So if you do, kindly let me know! I found this was a good shape because a) it was easy to fold together and b) it makes for easy cooking!  No matter what shape you decide on, ensure that there are no air pockets in your dumplings. 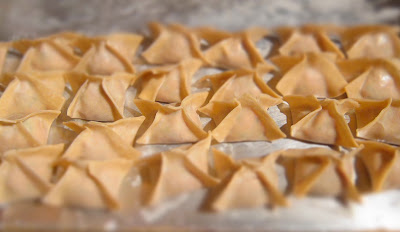 Whichever way you go, it involves the same process. Lay out a bunch of wonton skins, and place a little less than a teaspoon sized ball of filling smack-dab in the center.  Wet your fingers in the finger bowl and wipe the edges with water.  Fold into your desired shape! For mine, I brought two opposite corners up and squeezed the top edges, followed by the remaining two corners, sealing all of the adjacent edges together.  These sat upright nicely, which made me happy.  Continue with the remainder of your dumplings until finished.  You can save these for later, or per my recommendation - cook them!

To cook these in the Kuo fashion, you'll need a bit of vegetable oil and some boiling water.  Heat up a medium to large skillet over high heat, and swirl in a bit of vegetable oil.  When the oil is hot, place the dumplings in, pleat side up - this occasion is one when you can actually crowd the pan, so get as many as you can! Shake them around a bit to keep them loose from the bottom.  Pour enough boiling water into the pan to reach about an inch high.  It's important to use boiling water here!! If you don't water and oil with spatter all over the place, and most likely you as well.  If you've ever been burnt by hot oil, you know that this is not fun! So take precaution and boil.  With the water poured in, make sure none of the dumplings are sticking to the bottom of the pan.  Cover the pan, and steam-cook for about 5 minutes.  Uncover, and allow any remaining water to evaporate.  Allow them to cook for another two minutes, or until the bottoms of the dumplings are crisp and golden brown.  Remove the pan from heat and transfer the dumplings to a serving platter. 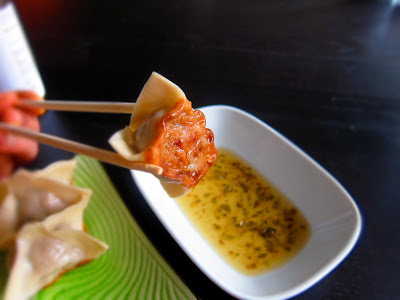 To serve, place a few dumplings on a plate per guest, or make a whole big platter - whichever floats your boat! Garnish with a few minced chives and black sesame seeds, and you're good to go.  The dumplings are good enough on their own, but you can definitely serve with a dipping sauce - apparently people get all riled up when things notoriously served with sauces are served without. Who knew? That being said, you can serve it with soy sauce, a ponzu, a nuoc cham, or whatever the heck you want!

On a side note, and no I'm not getting paid, I picked up this AMAZING spicy garlic sauce from The Saucey Sauce Co.  It is so epically delicious for a variety of things, and it does pair famously with these dumpling. True story. If you ever see it on a shelf, pick up a bottle ASAP - you won't regret it! 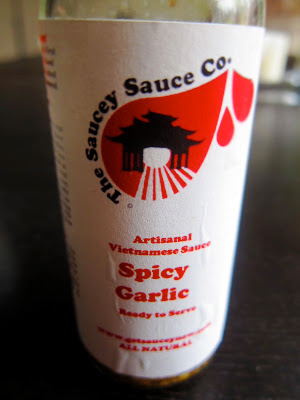 As for the dumplings - damn these dumplings! Although it WAS the boy's idea, he now grumbles at me for ruining all other dumplings for him in life. Sorry buddy.  That's aight though, because I'm gonna open a dumpling cart! Right next to my taqueria - Tedo's Taqueria. That's right. I'm building an empire (in my dreams). But seriously - the flavors combined in these little pockets of goodness are delightful! Seemingly simple, but actually complex when it comes to taste.  Most dumplings are pretty one dimensional, which is sad...and the only saving grace is that they're fried or minorly crispy on the bottom.  This is not the case with these dumplings! The combination of the various liquids put in the filling give them a nice deep, umami base flavor, while the garlic, chives, and scallions brighten up the entire dish.  As for texture, the wonton skins stay perfectly al dente - not too floppy or delicate, but not hard either - and crispy, golden brown on the bottom. I can only IMAGINE what these would taste like with fresh, homemade dumpling skins.  The chive and sesame seed garnish not only give the dumplings a nice look, but add a nice additional crunch and freshness. I am seriously glad there are three dozen of these! 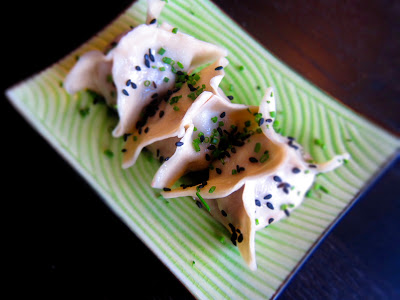 Belinda @zomppa said…
These are beautiful! The stuffing looks so flavorful and..simply fantastic!
August 28, 2012 at 7:36 AM