tomfoolery: a play on sweetness 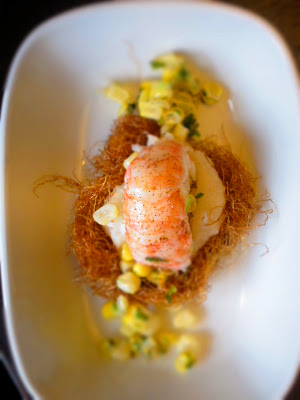 Well friends, it's been too long - but I'm back in action! Things have been getting all sorts of crazy, but as always, in a good way.  Heck, even my fishmonger and veggie guys were asking where I've been - so that might be a sign that frankly, it has been too long!  Needless to say, I'm glad to get back in the kitchen to experiment.  I've had a hankering to hit up the farmer's market for SO long, especially since summer is close to reaching it's peak, and finally I was able to.   And I was on a mission.  It's corn time, baby!  We all know my love for corn.  Corn pizza? Check.  Corn Ravioli? TRIPLE CHECK. Corn for life.  There's nothing like corn in the summertime either - especially if it's JUST picked off the stalk.  Barely cooked - maybe let it sit in the hot sun for a minute, that should suffice - no butter, no nothing.  Absolute perfection! Unfortunately, NYC is no Mitten State, so there aren't many stalks to be picked from in my general vicinity to get them just that fresh, but these guys at the market are the next best thing!

Of course, everyone and their mother had some sort of corn: yellow, white, bi-color, you name it.  No varietal differentiation, but there probably aren't enough crazies like myself for that to make much of a difference.  Either way, all I want to see is that the corn has bright, plump, shiny kernels that pop when you stick your thumbnail into it.  Yes, a trick my mother taught me.  Peel enough away to get to the top of the ear, and prick it with your thumbnail. If it doesn't even come close to exploding, put that ear down! *Sidebar Trivia* Why an "ear" of corn? Well, it's not that exciting, but it comes from an old Gothic word "ahs", which meant husk of corn. Boring right? I like to think it came from the fact that Arcimbaldo used corn as an ear in this picture: 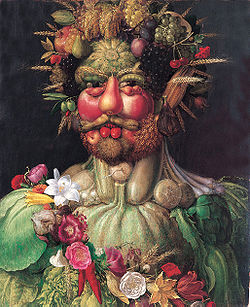 To each his own.  On we go! I finally found some beautiful ears of bi-color corn, fortunately none with caterpillars still inside, and was ready to make something delicious out of it.  I picked up some hot peppers, mint, and parsley root, and was ready to look for one more component from my fishmonger - something sweet (as sweet as seafood can be) to mingle nicely with the corn and other ingredients.  Alas, as I rounded the corner, I was confronted with my worst crustacean enemy, and my mouth's best friend - langoustine!  The guys with the devil eyes.  Sorry buddies, you can snap all you want at me, and have spiky claws, but I'm way bigger than you.  Fortunately, their friend, Mr. 15-pound-lobster, was in a separate area - otherwise, there may have been a SERIOUS situation/throwdown at hand.  I highly doubt the rubber bands would stop that lobster's claws from breaking loose.

Back at the apartment, I turned on some jams and was ready to get cooking!

For the vanilla and star anise brown butter:
1 stick butter
1 vanilla bean, split in half and seeds scraped out and reserved
1 star anise pod, lightly crushed in a mortar and pestle

To start, make the vanilla anise brown butter - the longer the flavors infuse, the better.  And don't worry, you will NOT be using all of this. Barely any really. But, if you're a breakfast person, I can guarantee this will be the most delicious thing you've ever put on your toast. Period. I also kind of want to make ice cream out of it...but that's another day.  In a tall, heavy-bottomed sauce pan, melt the butter over high heat. Boil the butter until it begins to caramelize - it will start to foam as well.  When the foam and butter begin to turn light brown, remove the pan from heat, and skim any "scum" off the surface.  Gently pout the butter into a stainless steel bowl, being careful not to pour in any of the milk solids at the bottom.  Next, whisk in the vanilla bean pod and seeds and the star anise.  Set aside in a warm place until ready to use.  If you're making this way ahead of time, strain out the vanilla bean pod and star anise pod after about an hour. 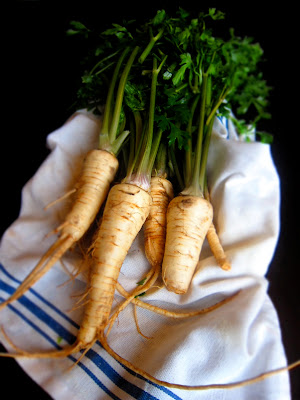 In a large sauce pot, bring about 4 cups of water to a boil, with a hefty amount of salt - maybe 3-4 tablespoons.  When the water has come to a boil, place in the chopped parsley root and cook until fork tender - obviously the cooking time depends on your chopping size, but it shouldn't take longer than 20 minutes. Strain the parsley root and transfer to a blender or food processor.  Give it a quick few pulses, then slowly add in the milk.  Process until smooth, and season with sea salt and fresh ground white pepper.  If you're really ambitious, you can pass this through a sieve or tam to make a more velvety texture.  Keep warm until ready to plate.

On to my favorite component - the corn! You should have about 2 cups of corn, depending on the size of the ear.  It doesn't much matter either way - the more corn, the merrier! Set aside about 1/2 cup of fresh corn.  In a small saute pan, heat up about 2 T of olive oil until shimmering.  Toss in the corn and saute for just a couple of minutes, just until the yellow color has brightened a bit - remember, corn this fresh doesn't need much! Transfer the cooked corn to a small bowl, and stir in the jalapenos, mint, and fresh corn.  Season with a bit of salt and set aside.

Optional, but frankly I would do it: Fried corn silk.  Yes, that pesky silk that gets all over the place when you husk corn? You can cook it! It makes for a nice little crispy, toasty, popcorn-esque nest.  Totally cool.  I made this component while the water was coming to a boil.  I don't have a deep fryer (thankfully) so I used a small pan filled with about 2 cups of grapeseed oil, which came about 3-4 inches up the side of the pan.  Prepare a bunch of paper towels to allow the silk to drain before you start frying.  Heat the oil to about 375F.  Separate the silk into four little piles, frying each individually.  Drop the silk in and swirl around with a fork so it gets a bit tangled up.  Cook until golden brown, remove to the paper towel, and repeat.  Sprinkle each with a bit of sea salt. 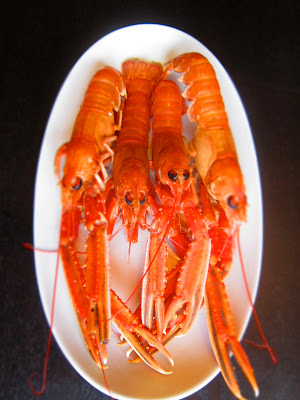 Finally, for the langoustine! Vegetarians, skip forward.  If you have live langoustine, you can either get after it and stab them right in the head and risk them lashing out at you, or you can be a bit more humane and place them in the freezer for about 15 minutes to put them in a coma first.  Whichever you prefer.  When ready to cook, bring a LARGE pot of water to boil, with a large amount of salt - you want it to taste like the ocean.  After the water has reached a rolling boil, gently place in the langoustine.  Let cook for two minutes, and remove to cool.  Once they are cool enough to touch, twist off the tails of each langoustine.  Save the heads and claws for yourself (yes, sometimes it's okay to be greedy) - most people just discard, but there's a bit of sweet meat in there to enjoy, you just have to work for it! Carefully cut along the sides of each tail with kitchen shears, gently removing the tail so it comes out in one piece.

To plate! This is the fun part.  If you've decided to make a little nest, place that in the center of your serving piece.  Spoon a bit of parsley root puree into the center of the silk nest.  With a spoon, scatter the corn on top, and around the corn silk, topping each with one langoustine tail.  Brush the tails lightly with the vanilla star anise butter, serve, and enjoy.

Watch the eyes of your guests light up! This is a fun, whimsical dish, but those factors don't lead to a lacking of flavor and quality.  There are so many minute forms of "sweet" without actually being "dessert sweet" that really make this dish fun.  Obviously the parsley root puree has almost a haunting, earthy sweetness - like the sweetness of a carrot, and the corn lends a sugary starchiness from, well, being corn.  Although vanilla and mint themselves aren't sweet, the flavor associations made with both ingredients trick your mind into thinking so.  And let's talk about that corn silk! It's pretty funky as a thought, but the flavor is awesome,  Perfectly crunchy, and super toasty - not fried tasting at all.  It tasted like the smell of fresh popped popcorn. Thankfully, the flavors aforementioned are kept in check by our good friend capsaicin.  With all this sweetness trickery going on, of course I had to add something to cut through.  Jalapeno saves the day! Altogether, this dish was one thing: scrumptious. 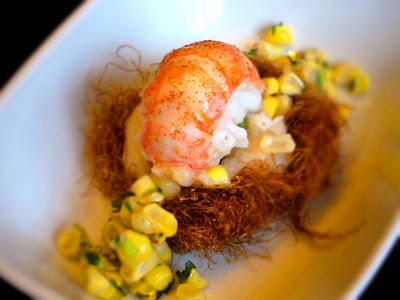