Bill Cosby got NOTHING on Grant Achatz 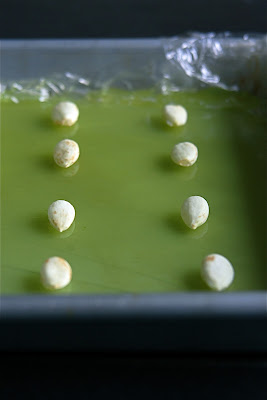 When I find something unusual at the market, I tend to swipe it up immediately and try to figure out something to do with it.   Frankly, some things end up sitting around because I have serious ambitions, but have yet to utilize said products:
• Beet powder - potential use as a dye or food coloring? Exciting plating possibilities? Apparently, the powder can be reconstituted with water into beet puree - interesting.  I know something snazzy could come of it when the time is right.
• Naga Jolokia Peppers - unfit for human consumption because they are a trillion times hotter than habaneros.  Maybe a burglar deterrent?
• Rennet - I have visions of myself having an illicit, speakeasy-type fromagerie, right from the comfort of my own kitchen.  I have made absolutely delicious fresh cow's and goat's milk ricotta, as well as cow mozzarella.  But as for moving onto the serious stuff - soon the day will come!
Moving on from randomness, I did pick up some little diddies at the market today that I was able to put to good (fun) use! Green almonds.  That's right - our favorite edible pit in baby form, bearing a true resemblance to its cousin, the peach.  Fuzzy and sage-colored on the outside, not at all almond-like besides shape on the inside. Bypassing a friend with my green almonds in hand, he gave me a bit of a surprised look.
"Green almonds - what're you gonna do with those?"
"....really, I'm not sure...I'll figure out something though!"
"Have fun! I have a dish right now using them with halibut crudo"
That should've been my cue right then and there to pick up some halibut, but of course I didn't. 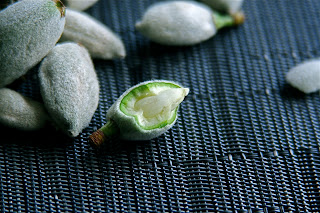 Back home, I decided to inspect my new goodies.  Very soft on the outside, with a hull very similar to an unripened olive.  In fact, they almost look like fuzzy olives, no? Unsure of what to do with these little guys, I decided to take a bite - minus the hull.  And what I found was quite surprising! Not a nut by any means - more the consistency of a grape! They popped when you took a bite, and were actually juicy, with a fresh, subtle grassy flavor.  After doing a bit of research, I came to find that these are a common snack in the Middle East, eaten with the hull, just dipped in sea salt.  Of course, I decided to give that a try! This way of eating the almonds was definitely more exciting - juicy and grassy from the kernel, a bit tart from the hull and of course, and crunchy from the salt - which also aided in emphasizing each components flavors as well. 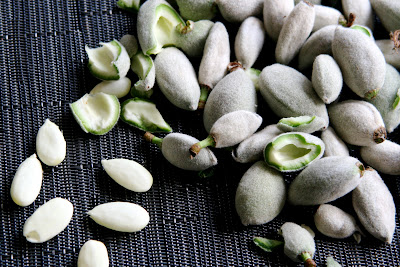 Mad at myself for not having bought halibut, I decided to look on my shelf of mad scientist cookbooks.  Fortunately, Mr. Achatz had a nice little recipe inside the Alinea cookbook, simply called "Green Almond", subtitle sweet, hot, sour, salt.  Sir, I do not have any inkling of what kind of recipe this may be.  Which of course means...my turn! Now I know this is an unrealistic recipe for most home cooks, but it was fun and the result was pretty - so check it out!
Green Almond
Adapted from the Alinea Cookbook
5 gelatin sheets
2 cucumbers (for the juice!)
2 t sugar
1.5 t kosher salt
8 green almonds, taken out of their shells
1 sugar cube
Sea salt (large flaked if possible - I used Maldon and picked out the biggest flakes)
Cayenne pepper
Citric acid (I, somehow, do not have this in my possession - I used finely grated lemon peel)
First, line a baking pan - about the size used for a toaster oven - with plastic wrap.  If you don't have a small baking pan, you can just bunch up the plastic wrap around the sides so it makes a little space about 6.5 in x 10 in. Don't worry, the plastic wrap will hold up!  Place the gelatin sheets in ice water for at least 5 minutes until they become pliable.  While you're waiting, make a bit of cucumber juice. Yes, my trusty juicer comes to the rescue yet again! First, peel and seed the cucumbers, then juice away! You want about 1/4 cup of liquid in the end.  Put this into a small sauce pot and warm the liquid over low heat.  When it's warm, grab the gelatin sheets, squeezing out any liquid, and whisk into the cucumber juice.  Remove the mixture from heat and whisk in 2 t sugar and 1.5 t kosher salt until dissolved.  Pour just enough of this liquid into your prepared pan to create an extremely thin layer of liquid - literally only a couple millimeters. Place the pan on a level surface in the fridge and allow the mixture to set, reserving the remaining liquid at room temperature.
After about 20 minutes, remove the pan from the fridge and place the almonds on top of the gelatin, placed far enough apart that you can make little Jell-O-esque squares upon completion.  Gently pour half of the remaining mixture around the almonds and place back in the fridge for 20 minutes more.  Finally, add all the remaining mixture to the pan, being careful not to cover the almonds up.  Let this set one final time in the fridge and you're ready to go. 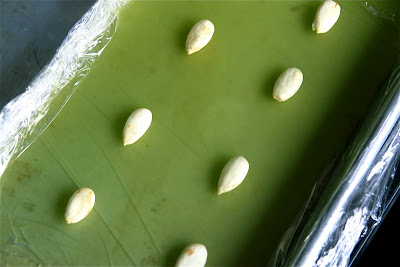 When you're ready to try these out, carefully lift the cuke-filled plastic wrap out of the trap.  It should be fairly firm, so it shouldn't be too problematic.  Cut the gelee into little squares, with each almond in the middle.  Place square(s) onto a plate(s) and prep for garnishing! Place a small amount of the four remaining ingredients in each corner - it's like a boxing match of flavors!! 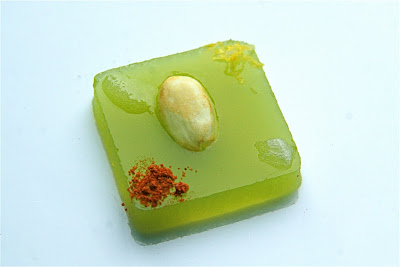 I think I may try my hand at a bunch of different gelees, but that's for another time and place.  The dish was very interesting to say the least - obviously gelatinous in texture, with a bit of bite from the green almond, but as stated before, that was kind of grape-y in texture as well.  The sugar and salt gave a nice crunch, with the lemon zest brightening up all these fresh flavors.  And, the small amount of cayenne really added a kick to this - it was miniscule enough not to give any flavor really, just a nice warmth that lingered on my tongue for a good five minutes.  This is truly a fun dish because you don't know what to expect before eating it, and Grant is right when he simply subtitles the dish "sweet, hot, sour, salt".  I still have a few green almonds left over, so I may just make myself some halibut crudo!
Email Post
Labels: alinea almond cayenne cucumber gelee grant achatz green almond jello