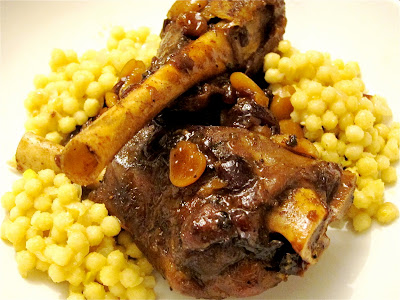 So, we all know about me and my Moroccan obsession.  Fortunately, the other day, it just happened to be Paula Wolfert's birthday! What better reason to make Moroccan food than that!? Clearly I don't need excuses, but it never hurts. She brought Moroccan cuisine to my heart, and I will therefore bring it to my stomach!  Goat shanks in hand, the obvious route to take would be that of a tagine - slow, low, braised, stew-like concoction made with any number of various ingredients, but toughter cuts of meat clearly fare quite well from this preparation.  Of course, I don't have my tagine with me in the city (why do I not have my tagine with me in the city?!), but any heavy-bottomed saucepan with a tight fitting lid will work.  The tagine works best because the conical lid allows for condensation to build up, and drip back down, keeping all your ingredients nice and moist.  As long as you have a lid, you're alright!
Speaking of tagines - I want one of these hand-painted Bram tagines - pure artwork! But that's for another day.
First things first, before we get into this goat shank cookin', let's talk about something.  Most/many Northern African recipes call for ras el hanout ("top of the shop) - it's one of the mysterious spice mixtures that really has no specific recipe, but calls for a wide assortment of herbs and spices, which again, no one is sure which ones are 100% necessary, and in what quantities.  Some ras el hanout mixtures can contain up to 30 (yes, thirty!) different spices, including but not limited to: various peppers and peppercorns, lavender, allspice, cloves, coriander seed, cardamom, termeric, Grains of Paradise, ginger, cinnamon....the list goes on and on.  Each shop at the souk, or even each family for that matter, has their own recipe for the spice mixture.  I, unfortunately, do not...yet! But maybe that's a signature something I'll strive to create in the near future.  Needless to say, I didn't have any store bought ras el hanout, so I took it upon myself to make a random mixture of spices typically used in ras el hanout for my goat tagine. Frankly, I wasn't even quantifying the spiced I put into my spice grinder, but if you want to make your own, just experiment! Mine consisted of allspice berries, black and white peppercorns, nutmeg, green cardamom pods, dried ginger, cinnamon, turmeric, cloves, dried cayenne, aniseed, and rosebuds. It was delicious!
But let's move on to more important things - the GOAT! I made a traditional tagine with dried fruits and nuts - slightly sweet, but not overwhelmingly so, but classed it up with a medley of untraditional dried fruits and Marcona almonds.
Goat Shank Tagine with Marcona Almonds and Dried Fruits
1.5 pounds goat shank (this was the equivalent of four shanks)
1.5 t ras el hanout
Big pinch of kosher salt (~1/2 t)
1/4 t ginger
1/2 t fresh ground black pepper
Pinch of pulverized saffron
1 cup Marcona almonds
2 cloves garlic, peeled and minced
2 small cinnamon sticks (I used canela in this recipe)
1/4 olive oil
1/2 pound of dried fruits - cranberries, raisins, and prunes for me this time
1/4 cup dark honey
1/2 T ground cinnamon 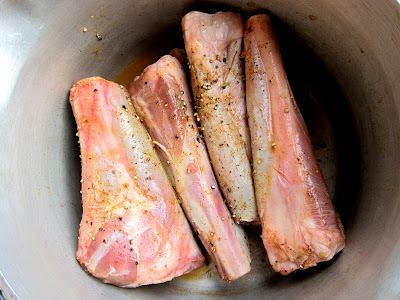 To start, mix together the ras el hanout, salt, ginger, pepper, and saffron with about 3/4 cups of water.  Place the shanks in a heavy-bottomed saucepan/casserole/tagine, and pour the mixture over the meat, rubbing it into each piece.   Next, add the almonds, garlic, cinnamon sticks, oil, and about 1 1/2 cups of water.  Bring the entire mixture to a boil, then simmer, covered, for one and a half hours.  Check this occasionally to ensure there is always liquid in the pot and that the meat doesn't burn or sear. 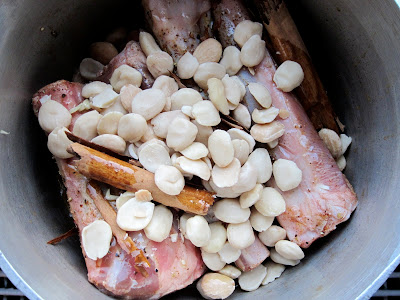 After simmering, add in the dried fruit, honey, and ground cinnamon, stirring to combine.  Continue to cook for another 30 minutes, letting the dried fruit reconstitute and plump up.  Remove the cover from the tagine and over hight heat, reduce the sauce, stirring often and turning the meat so it doesn't scorch on the bottom of the pan.  Reduce until the sauce is quite thick and syrupy. 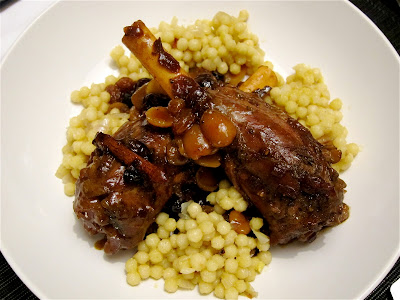 I served the tagine with a simple Lebanese couscous - a quite large-grained couscous, actually.  Bigger than Israeli couscous, which I love! These grains are actually about the size of peas, and were a great textural addition to the tagine.  I also had some roasted carrots and parsley root tossed in a friend's homemade Harissa with tarragon and mint. 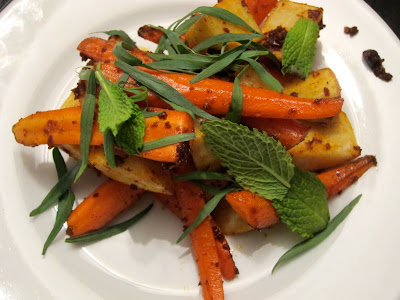 Altogether, there was a flurry of flavors! Spicy, sweet, savory, and refreshing.  Yes, FLURRY! And the meat fell RIGHT off the bone - it was tender as can be! The great thing about this tagine - well, any tagine really -  is that everything ends up cooking perfectly, even though some measurements may not be exact.  It's just a great combination of flavors and spices that come together beautifully after cooking for so long, and infusing whichever meat it may be that your stewing.  Also, the fruits plump up nicely, and the almonds tender up a bit, so they are just al dente.
Happy Birthday Paula, and cheers to being such a great inspiration!
Email Post
Labels: almond goat cheese harissa moroccan north africa paula wolfert ras el hanout stew tagine

Anonymous said…
This article gives the light in which we can observe the reality. This is very nice one and gives indepth information. Thanks for this nice article. steel ruler