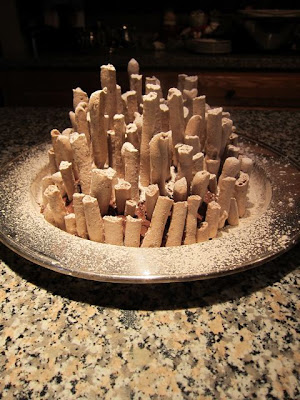 Well, I haven't posted anything since LAST YEAR! *snare drum - high hat* All jokes aside, it's been awhile! The holidays came and have gone too quickly, but I definitely had was able to pack a bunch in.  A bit of travel, a lot of eating and cooking, and of course, spending time with family and friends. And to say that it wasn't an indulgent close to one year and beginning to another would be a straight up lie! We kept the old, and brought in some new - in terms of recipes that is. (Shout out to elementary school friends - who remembers that "Silver and Gold" song about making new friends but keeping the old? Yeah, that's a throwback.)  Of course, the new recipes add a little pizazz to the selection, but the old never lose their appeal - I mean, come on...when will oysters in champagne sauce EVER not be amazing? And, a Christmas without a Bûche de Noël would be sacrilege.  Point being, it seems like every year it just keeps getting bigger and better! It makes me start to feel like this guy.  Hopefully that's not a sign that my life is going to turn into Charles Dickens novel.  In addition, I think that the holidays are also the equivalent to a legitimate reason for eating many sweets, treats, and desserts. Also a reason I feel like the aforementioned "guy".  So, since Serbian Christmas JUST passed by this weekend, I think it is still appropriate to give you an recipe for a delicious, but also impressive cake to whip up for dessert!
This recipe comes from the book The Cake Bible - my mom has had this book since before I can remember, and it's definitely gotten it's fair share of usage out of it.  Because it LITERALLY is the cake bible.   It's also where we get our Bûche de Noël recipe! But that's not what you're getting (this time) - instead, you're going to get the wonderful recipe for the "Enchanted Forest".  First of all, let's talk about how this cake is called THE ENCHANTED FOREST.  How can anyone turn down anything called that? Thank you, Cake Bible.   Second, it's basically all chocolate in some form, and to be quite frank, I'm not so big on chocolate desserts unless they are absolutely AWESOME. And this is awesome. I hate when the deliciousness of chocolate is wasted on a garbage preparation! Anyways, the cake itself is made with whipped egg whites, so it results in a fluffy and not at all dense texture (hence, Cloud Roll - you'll see).  It's then topped with a light chocolate ganache, where the chocolate flavor really comes through, and is topped with cocoa meringue sticks, which we know are light as a feather. You get the chocolate in a few of different preparations and voila! The Enchanted Forest. Let's get started!
This cake has three components - and most of it can be made 2 days ahead of time if necessary.
The Enchanted Forest
(Adapted from The Cake Bible)
All Recipes at the bottom of this post.
- 1 Cocoa Souffle Roll
- 1 Whipped Ganache
- 1 recipe Cocoa Meringue, piped into sticks
To Assemble:
Using an oval hand, or just going free hand, cut 2 ovals of equal size (about a 7-in oval) from the cocoa roll and remove all the surrounding pieces.  Test the pieces for quality control (true.).  Slide a long metal spatula under each in case they are sticking to the parchment paper.
On your cake platter (or cardboard if your transferring it later) place one oval down and cover it with about 2/3 of the ganache.  Place the second oval on top and spread the remaining ganache around the top and sides of the cake - it should be about 1.5 inches high.  Lay some meringue sticks with the flat sides down around the side of the cake just up to the top.  All these steps can be done two days ahead! If this is the case, refrigerate the cake, uncovered.
One hour before serving remove the cake from the fridge and insert the remaining meringue sticks into the cake.  Break the sticks into uneven lengths, placing the broken ends into the cake.  For looks, you can dip the tops of the meringue into powdered sugar, or as I do, sift powdered sugar all over the top.  Frankly, I find that more exciting - it's like it's snowing!
So, needless to say, this cake is visually stunning! All of the thin sticks of meringue of different hieghts really do make it look like an Enchanted Forest.  The cake and ganache combination is perfectly chocolately and not at all heavy.  And each bite that contains some interior meringue is especially perfect! Because about an inch or so of each meringue stick was in the cake for an hour, they've sucked in some moisture and gotten just a tad bit chewy.  Getting a piece of everything in one bite is like a textural explosion! It may sound like a lot of work to make this care, but in the long run, it's worth it!
And the aftermath: 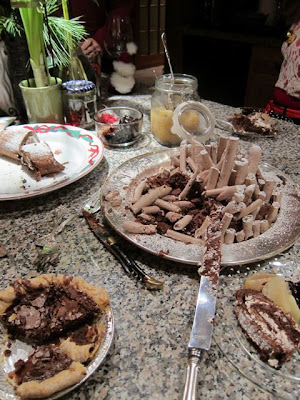 In a large mixing bowl, combine the 6 egg yolks with ½ C of sugar and beat for 5 minutes with an electric mixer (longer if you're doing it like the olden days!)  until light and fluffy. Add the chocolate mixture, and the ground almonds if using, and beat until incorporated and well-blended, scraping down the sides.
In a large bowl (again, preferably copper), beat the egg whites until soft peaks begin to form. Gradually, as you continue beating, add the rest of the sugar and beat until stiff peaks form. With a large whisk, slotted spoon or spatula, fold about 1/3 of the beaten whites into the chocolate mixture to lighten it before folding in the rest of the whites in 2 or 3 additions. Fold in the whites extremely gently until completely blended in.
Pour the batter into the prepared pan and spread evenly. Bake in the preheated oven for 18 minutes. The cake will have puffed, faded in color and lost its shine and the surface will spring back when lightly touched. Remove the cake from the oven, and leaving it in the pan, place it on a cooling rack. Sprinkle the remaining tablespoon of cocoa powder evenly all over the cake.  Finally, wet a clean dishtowel and ring it out well.  Cover the cake with the damp dish towel. Refrigerate until ready to assemble.
Whipped Ganache
1 pint heavy cream
8 oz bittersweet chocolate, chopped
1/2 teaspoon vanilla extract
Break the chocolate into pieces and process in a food processor until very fine - leave chocolate inside. In a saucepan, heat the cream until it boils.  With the food processor running, slowly pour the cream through the feed tube in a steady stream. Process for a few seconds until smooth. Transfer the mixture to a large electric mixer bowl and refrigerate until cold - about 2 hours, stirring once or twice. When ready to assemble the cake, remove the ganache from the fridge and mix in the vanilla.  Beat with the mixture for a few minutes until it has lightened a little.  Be careful not to overbeat, or it will become grainy.  If this DOES happen, remelt the mixture, chill, and rebeat.
Cocoa Meringue
4 large egg whites
1/2 t cream of tartar
1/2 C + 1 T superfine sugar
1 C powdered sugar
2 T cocoa powder
Preheat the oven to 200 F.  While the oven heats up, line a large baking sheet with a Silpat or parchment paper.  In a small bowl, whisk together powdered sugar and cocoa, and set aside. In a mixing bowl (copper if you have it!) beat the whites until frothy.  Add the cream of tartar, and beat at medium speed.  Gradually add 3 T of superfine sugar.  When stiff peaks form, gradually add in the remaining sugar and beat until very stiff and glossy.  Fold the powdered sugar and cocoa powder mixture into the meringue gently until combined.  Place the meringue into a pastry paper with a 3/4 inch tip.  Pipe onto a baking sheet in sticks, about 1/2 inch wide.  Bake for 50 minutes or until the outside is crisp, but not browned.  Remove and let cool.
Email Post
Labels: cake cake bible chinese new year chocolate cocoa dessert enchanted forest ganache holidays meringue souffle special occasion sugar summer roll