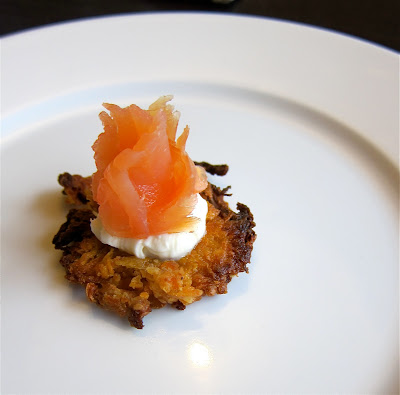 Latkes.  Latkes?! It's not even the time of year anymore for latkes...or is it!? Seriously though, these latkes are good ANY time of the year.  Why, you ask? Of course I'm going to tell you.  Because they're made with sweet potatoes! And a bit of onion...and a touch of apple.  Finished with some Greek yogurt (or creme fraiche!) and smoked salmon - it's every bit as decadent as it sounds.  If you want to really get down to business, top it with a touch of caviar...why not?  Also, if you're in NYC, I suggest you go to Russ & Daughters for all of your appetizing needs.  They're smoked salmons are outstanding, they have the best prices for caviar, and their smoked whitefish salad is to die for...and that's HUGE coming from a Michigan girl, where we take some serious pride in our smoked whitefish and various preparations.  Basically, if you've never been to Russ & daughters, make a trip out of it.  They're bagel sandwiches are outstanding if you're in the need of a giant snack! 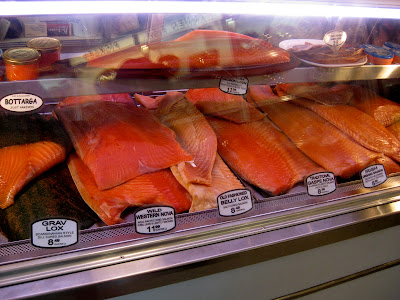 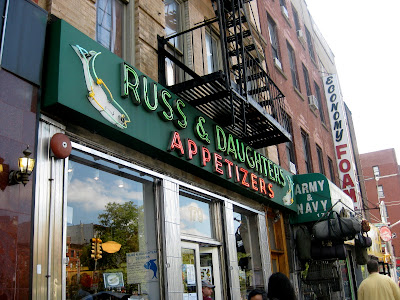 This recipe is an oldie but a goodie.  I have no idea where the recipe first came from, but I do know that it's a permanent fixture in my hippocampus.  I also know that my mom was making these long before my hippocampus started operating as a memory storage bank - usually for special occasions and dinner parties.  This snack, among other things, definitely transports me back to various dates throughout my childhood every time I take a bite!  Although it may sound strange to people that have never had them (latkes...made with SWEET potatoes?!) - it sure will never be the last time they'll be tasting them! I made these for the boy's family once, and they about lost it! I also overshot my recipe and ended up making what seemed like 2,000 latkes - and thankfully! They went like hot (potato pan-) cakes!

So, if you're having some friends for dinner or some cocktails, or even if you're feeling like something absolutely scrumptious - whip a few of these up and enjoy the little dance your tastebuds will start performing!

To start, combine the sweet potato, onion, and apple together in a bowl.  Mix in the egg until combined.  Next, add flour, about a tablespoon at a time, to the mixture until you can readily form little patties that don't fall apart.  The amount of flour used will vary, depending on the water content of your apple and onion, so keep an eye out here! 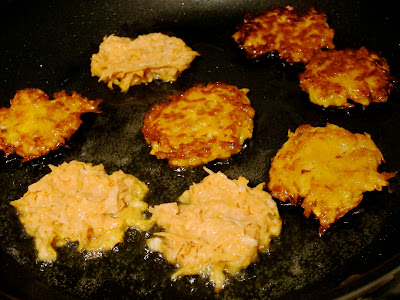 In a large skillet (seriously, large...the bigger the better, since you'll have to cook in batches!), heat up enough grapeseed oil to cover the bottom of the pan over medium high heat.  You want this oil to be super hot, but not smoking.  We're using grapeseed oil here because it has a higher smoke point than olive oil, so you can get a nice golden brown crust without having smoke alarms go off!  When the oil is hot, gently start placing the latkes into the oil, ensuring that they aren't crowding one another.  My technique is to take a ball about the size of a ping pong ball (maybe a bit smaller), placing it into the pan, and flattening it with a spatula - this is easy and works well! Otherwise, your latkes may start falling apart before they hit the pan.  Let the latkes cook a couple minutes per side, or until they are golden on both sides.  Transfer to a paper towel lined plate or cooling rack, sprinkle with a bit of sea salt and continue with the remaining latkes until all are finished. 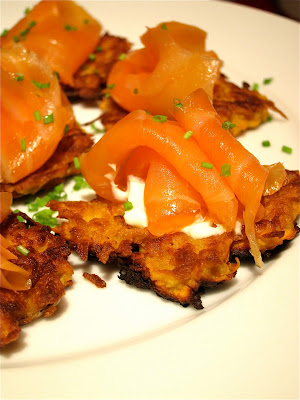 To plate, place a dollop of Greek yogurt on each latke.  I like to use Greek yogurt here because it's a) good for you, b) delicious, and c) if you get creme fraiche, you most likely will have to get an entire TUB of it.  You could also make your own creme fraiche.  I digress...to each her own! Top with a couple slices or a hunk of sweet potato, sprinkle with chives, and voila! Taste a few just to make sure they're "okay and not poisonous."  Let out a a happy sigh and crack a smile, and behold the deliciousness that you just experienced!!  Serve hot, and watch these goodies get gobbled up like they're going out of style.  Except they will NEVER go out of style.

The latkes themselves are absolutely divine - they really don't even need anything atop, but accoutrements just take it to the next level.  They are perfectly golden with a bit if crunch on the edges.  The yogurt cuts through the fattiness of the smoked salmon, as well as the slight oiliness of the latkes, and the salmon itself gives a nice velvety, tender texture to the whole package.  I may have to run to the kitchen to whip up another batch...happy cooking!