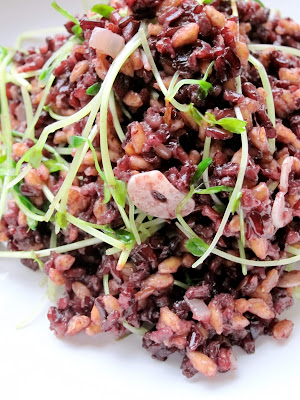 So I've been in a frenzy.  A RICE frenzy!! About a week ago, I found some sweet pea shoots at the grocery store, and it triggered a memory of a recipe - obviously.  Ever since, the seed has been planted in my mind to cook this amazing "side", although it's so good I could just eat it as a meal.  It's been what seems to be forever since I've last had this, and it's way past due.  Farro, black rice, garlic, and pea shoots.  Doesn't sound exciting? Add in that it's originally a Suzanne Goin recipe from Lucques, and you're moving on up.  S.G. can take these humble ingredients and take it to the next level - in her book, almost all of recipes have a certain level of complication, but the results make a few extra steps well worth it! 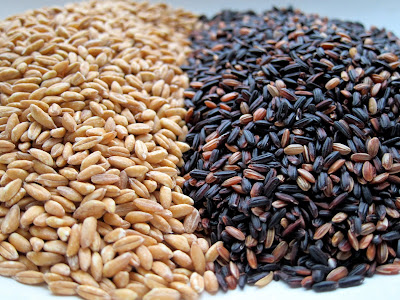 First off, let's chat about black rice.  If you've never had black rice, you're seriously missing out.  (Also kinda like how if you've never had seriously, legitimate wild rice, you're seriously missing out!)  It's a kind of sticky rice used often in Asian cultures, but you can see it more often around these parts - for this recipe, I used Lundberg rice, which sells a mix of black rice and mahogany rice.  If you can find "Forbidden Rice" or any other straight up black rice, go for it! The rice grain's deep black husk contains lots of great antioxidants in the form of anthocyanins - think blueberries, acai, pomegranate, red wine - which are not only great for you, but also give the rice a beautiful deep magenta/purplish hue after cooking! Then we've got farro - one of the oldest grains cultivated, originally from the Middle East, but now grown primarily in Italy - and it's a great grain to mix in with the black rice, both aesthetically and texturally! The farro is like a wheat berry, and when cooked al dente, has a great toothiness to it - a great juxtaposition next to the sticky black rice.  But enough of this health talk, lets move on to the recipe! 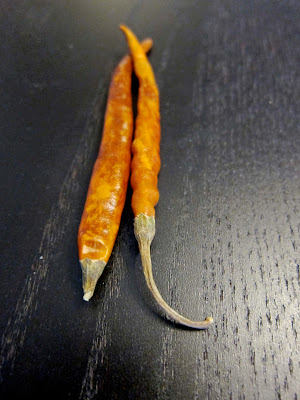 Before you start, remember, Miss G sometimes makes recipes complicated, so be sure to read through the recipe first! If you don't you could end up spending hours on this! (Unnecessary). Get out a couple big sauce pots out and get cooking!

Heat a medium saucepan over medium heat for about 1 minute. Swirl in 2 T of olive oil.  Add 1/2 cup of the chopped onion, one chile, and a bay leaf. Cook until the onion is traslucent, stirring often.  Add the black rice, stirring to coat it with the oil, allowing it to toast lightly.  Add 2 cups of water (or stock if you have it), a pinch of salt, and stir to combine.  Bring the mixture to a boil, lower to a simmer, and cook for about 45 minutes, until the rice is tender. When it's almost done, stir constantly until any leftover liquid is absorbed.  Season with a few grinds of black pepper and transfer to a baking sheet to cool.  Discard the bay leaf and the chile. 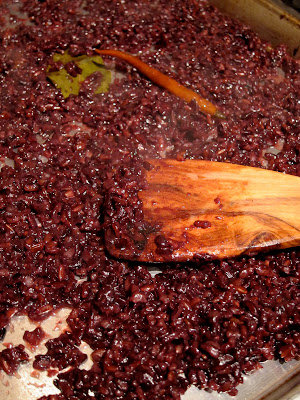 In a second medium saucepan, heat 2 tablespoons of oil over medium heat.  Add inthe remaining onion, the thyme, and the bay leaf.  Cook, until the onion is translucent.  Add the farro, stirring again to coat with oil, allowing it to toast a bit.  Add at least 3 cups of water and a pinch of salt, and bring to  boil.  Turn the heat to low, and summer about 30 minutes, until the farro is just al dente.  If you are using pearled farro, it may take less time - be sure to read package instructions as well just in case!  Once cooked, strain the farro, discarding the bay leaf. 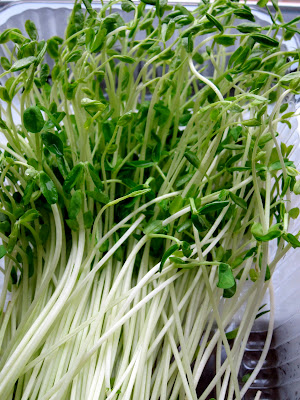 Finally, in a large stockpot or large sautepan, heat 2 tablespoons of olive oil.  Add the garlic (green garlic if you're lucky!), the sliced chile, and a pinch of salt - saute for about 3 minutes.  Add the farro and a few grindings of black pepper.  Cook for about 5 minutes, stirring constantly, making sure to scrape the bottom of the pan.  Stir in the rice and cook until heated.  Finally add the pea shoots, cooking until they are just wilted.  Taste for seasoning and transfer to a serving platter. 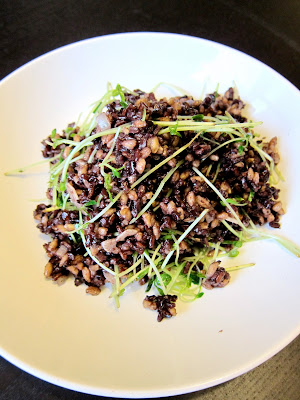 The fact that I haven't had this dish in so long really makes me question my prioritization of things.  It's absolutely stunning - all by it's lonesome! Granted, a lot of pans get used, but it's worth every extra bit of elbow grease you're going to use later for cleaning!  Also, I used virgin coconut oil (!!) as my oil for sauteing the onions et al. for the grains - I think it added a deep hint of coconut to the dish which is AWESOME! Obviously, using olive oil as the recipe states will result in a stunning dish no matter what.  The flavors in this dish are amazing - the chiles de arbol and the bay leaves with the grains really make a difference.  There's a hint of heat in the dish that just slowly warms you up while chew the perfectly al dente grains.  And of course, the wilted pea greens brighten the dish up with that sweet vegetal taste.  Absolute perfection I say!!  This recipe does make a pretty decent amount, but you'll want more after having you're first bite.
Email Post
Labels: black rice delicious farro garlic grain lucques pea shoots recipe rice side stock sunday suppers suzanne goin vegetarian