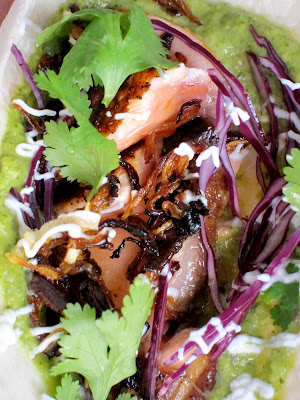 So, I recently "liked' Border Grill on Facebook. I know, lame way of starting out a blog post right? But I think there was something serendipitous about it.  First off, I LOVE BORDER GRILL.  It's one of those places that has been there forever, and at first thought you're kind of all, "I don't know - California, Mexican, probably just standard." But alas, this is not the case. Mind blowing!  Mary Sue Milliken and Susan Feniger, the original Food Network chefs, Too Hot Tamales, know their business when it comes to Mexican food, let alone all food in general.  Border Grill's EVERYTHING, especially their vegetable plate entree - I know right? It's literally a plate of sweet creamed corn, green chick peas, braised fennel, quinoa salad, sautéed mushrooms, black beans, and seasonal farmers market vegetables. I don't know what magic they sprinkle on it, but it's one of the best dishes, and so simple! THEN Susan Feniger decides to open STREET - a restaurant whose menu consists literally of all amazing street foods from all over the world.  This is the first place I ever had Kaya Toast - a Malaysian snack made of toast with a coconut jam that you dip into a fried egg with dark soy sauce.  Sounds crazy, but really it's just crazy delicious.
Ok, but really, moving away from reminiscing, a little note popped up on my newsfeed saying, "how about a little trip to Santa Monica? Enter to win with your favorite fish taco recipe". SO: 1) YES I would love to go back to Santa Monica for many reasons. 2) I love challenges. 3) I LOVE FISH TACOS!  A coworker of mine back in LA claimed I was the only person East of the Hollywood Hills that liked, let alone knew what fish tacos were.  Looking into the challenge, I come to find that it's an Alaska Fish Taco Contest, which means you can only use Alaskan seafood - Alaskan Salmon, King Crab, Halibut, Spot Prawns, Black Cod, etc.  That's fine, except that Alaskan seafood is EXPENSIVE! But totally worth it.  Needless to say, it was time for me to start brainstorming.  I could've gone with my old standby fish taco recipe, but that's not enough to win a contest.  I have a few ideas still in my head, but the first idea I envisioned and first I've cooked was.....outrageous.  Ancho Chili rubbed King Salmon with a Pea, Mint, and Jalapeno "Salsa Verde" and some other fixings.  Let's just say, it was tasty.
Spice-Rubbed Alaskan King Salmon Tacos with Spicy, Sweet Pea Salsa Verde
1.5-2 lb. King Salmon, from the shoulder end, or center cut, skinned
4 T ancho chili powder
1 large sweet yellow onion, thinly sliced
1 cup peas (frozen is fine, just thaw them)
4 T fresh mint, chopped
1 jalapeno, sliced (more or less, depending on how hot you like it!)
2 T cucumber, chopped
3 limes, 2 juiced, and one cut into 8 small wedges for garnish
Olive oil
Kosher Salt
3/4 c thinly sliced red cabbage
1/2 plain Greek yogurt
1 cup cilantro leaves for garnish
8-10 small corn or flour tortillas, warmed in the oven if you prefer
To begin, you want to start caramelizing your onions since this takes the longest time out of anything. Heat a small saute pan over medium-low heat and swirl in about 3 T of olive oil. Once the oil is shimmering, add in the sliced onions and one pinch of salt (about 1/2 teaspoon).  Toss/stir the onions until they are evenly coated with oil.  Slowly cook the onions, stirring frequently to ensure they don't burn or become crispy, for about 30 minutes, or until the onions are tender, brown, and buttery tasting.
While the onions are cooking, you can start to make the salsa verde. Add the mint, peas, jalapeno, cucumber, lime juice and 1/2 t of kosher salt into a blender, a food processor, or use an immersion blender to puree the ingredients.  Taste for seasoning and adjust if necessary. Set aside.
Now for the salmon! For quicker cooking, you can have your fishmonger cut your salmon into smaller fillets, which I did.  Sprinkle the ancho chili powder over top, coating evenly, and rub it in a bit. Sprinkle about 1/2 t worth of salt over all of the salmon. Heat a large skillet over medium-high heat, and swirl in 3 T of olive oil to coat the bottom of the pan.  When the oil is shimmering, place in the salmon, flesh (chili rubbed) side down and cook about 2.5 minutes, until a crust has formed.  I've said it before, but fish will let you know when it's ready to flip - if you can't easily slide a spatula underneath, wait a bit longer.  Once you flip, cook for another 2.5 minutes, until the skinned side has a nice golden crust on it.  If you look at the side of the salmon (especially with pre-cut filets) you should cook until the side looks no longer raw.  That way, the inside will be JUST medium rare, and perfect!  Remove fish from the pan and set aside.  When ready to serve, you can either slice the fish, or just use a fork to break it up into small pieces. 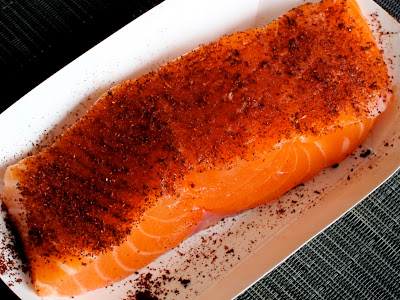 At this point, all of your ingredients should be ready and you can set up a mini assembly line. Plate of tortillas, bowl of salsa verde, Greek yogurt, caramelized onions, salmon, purple cabbage, cilantro, and lime wedges, CHECK!  Lay it out and go to town.
Um, HELLO and holy mackerel! (Salmon?) I wish I made more of these because they were absolutely spectacularly delicious.  Actually, it's probably better I didn't make more because I would've eaten them all.  The salmon was perfectly cooked and buttery - still a little rare in the center, which I love.  The crust on the outside was just thick enough and crunchy, and the ancho gave a nice, warming spice. The caramelized onions added a little bit of deep savoriness to the tacos, while the salsa verde really brightened it up.  The purple cabbage hung around not only for a nice visual addition, but added its own crunch and slight sweetness as well.  Added cilantro and a squeeze of juice made the whole dish pop!
Epic fish tacos.  This is a recipe for the books, that's for sure.  Wish me luck!
Email Post
Labels: alaska caramelized onions fish tacos greek yogurt jalapeno mint pea salmon tacos