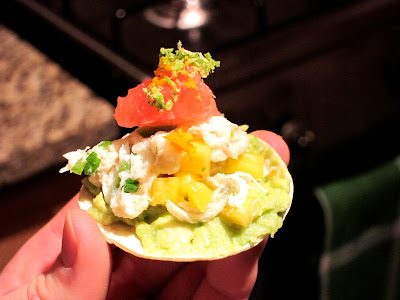 I think my brain works kind of like those chips that come in a tube - once you pop, the fun don't stop! At least in the sense of making tacos right now.  Literally, give me a challenge, and I'll run with it - I want to make thousands of different kinds! So, needless to say, you may see a couple more taco-esque creations in the near future. Like right now future.  Today's ingredient: crab.  I love my crab crostini, but the flavors are just not appropriate for utilizing tortillas as a vehicle. So I decided to go a little tropical - crab is classic with avocado and citrus, so why not give it a shot and kick it up a notch!? And that did happen.
Citrus Crab Salad Tostada Bites
1/2 lb. crab meat, lump is best, but anything is alright
1/2 ripe mango
½-1 jalapeno
2 T chives, minced
2 T mint, minced
1 large orange
1 ruby red grapefruit
1 lime
1 avocado
1/2 t salt
4 6-in flour or corn tortillas. Or whatever you have on hand really, tortilla is tortilla! 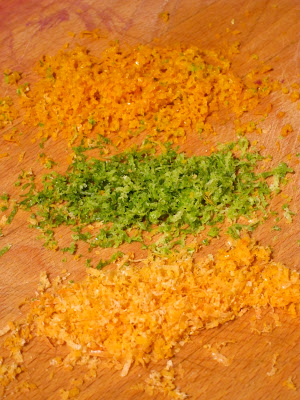 To start, prepare the citrus fruits.  Zest the entire lime, and then equal amounts from the orange and the grapefruit.  Now take your grapefruit and supreme it. Do what to it you ask!? It's simple really, if not a little bit juicy (literally).  Slice a small portion of the top and bottom of the grapefruit so it can easily stand on end.  From here, run your knife down the curvature of the grapefruit to remove not only the peel but the pith as well, leaving you with just the literal grapefruit flesh. Continue all the way around until there is not peel or pith left, and now comes the fun part! If you're right handed, hold the grapefruit in your hand (make sure you don't have any cuts, it will sting!), and slice as close as possible along the inner pith to remove perfect little segments of grapefruit all around. Voila! Who needs pith when you can have supreme? Cut each in half and set aside with the zest (separate) for later - don't throw away the supremed pith - there is juice to be had for later! 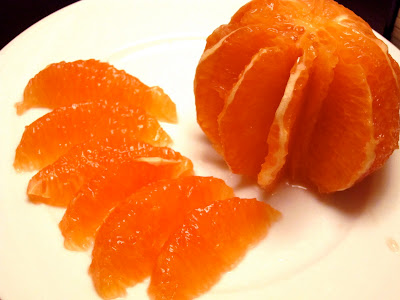 Next up, crab salad!  Start by cutting 1/2 of the mango into 1/4 inch dice.  Mangoes are kind of one of those obnoxious fruits as well.  Peeling and cutting it is actually east, and similar to  the above technique for the grapefruit (but with no segments, clearly).  Cut off a small part of the mango from the stem end to allow it to stand up.  Slowly slice of the outer peel from the top down. Once you've gotten all the way down, cut the fruit away from that big, irritating pit.  You'll notice mangoes are kind of football shaped, and skinnier looking from one angle than the other.  Place the mango so that you're looking at it the skinny angle - from here, you can run your knife from the top, right along side that pesky pit.  Once you've removed the flesh, go on with the dicing!
Place the mango pieces, crab, jalapeno, chives, and mint into a large mixing bowl. Over top, squeeze that (what looked to be) refuse of the supremed grapefruit.  You should get a substantial amount of juice out.  Next, squeeze 1/2 of the orange, and 1/2 of the lime out.  Be sure to roll your lime around with a lot of pressure to allow more juice to come out. Add about 1/4 t of kosher salt and gently mix with your hands until fully combined.  Set aside in the fridge so the flavors can meld together. 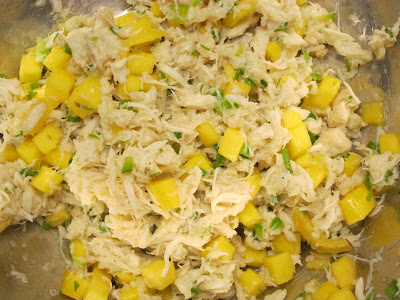 For the avocado smear, cut out the flesh of the avocado and place into a molcajete, mortar and pestle, or just a plain old bowl with a fork and mash it up.  Squeeze the juice of the remaining 1/2 lime over top along with another 1/4 t of salt, and mash up until you have a smooth-ish concoction. 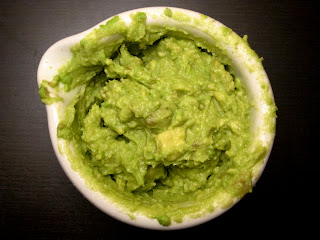 And now the fun part! Heat your oven to 300F.  While you're waiting for it to heat up, you can cut little tostada bite-size pieces from the larger tortillas! I used about a 1.5 inch ring mold for mine - cookie cutters are alright too. Heck you can even use shapes if you want!  Once you've through, place them in the oven and allow to crisp up and turn golden brown.  If you like, you could fry them, but I'd rather go the baked route.
Once all of your tostada pieces are toasted up, bring out all of your other components for assembly.  First, spread the avocado smear all over the surface of the tostada. 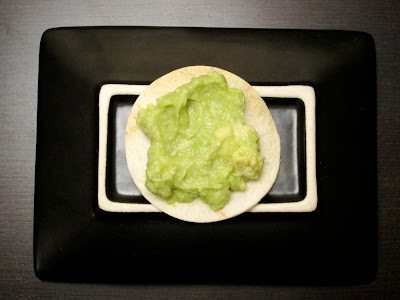 Next, top with about 1 teaspoon to 1 tablespoon of the crab mixture, followed by a small segment of the grapefruit supreme and a small sprinkling of each citrus zest. 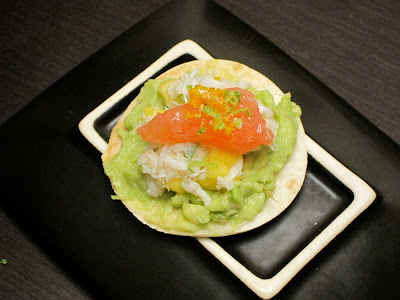 Citrus explosion!! This was a great combination of flavors, and really just bright and cheery for such a gloomy New York day.  On a side note, if you don't want to be obnoxious like me and cut out tiny little tostada rounds, you can obviously use tortilla chips - I just like to make things difficult.  Even though there was a lot going on here, you could really taste each ingredient come through - the different zests, the actual grapefruit, the components of the crab salad, and of course the buttery goodness of the avocado smear.  And it's pretty to look at too!
Email Post
Labels: avocado cirtus crab grapefruit lime mango mint orange tostada