Yet another day full of tasty treats! So, I've come to the honest conclusion that any time I'm at the market and see something random, I absolutely have to find something to do with it. It's kind of like a personal self-challenge. I mean, if I really want to claim that I know what I'm doing in the kitchen, I can't just stand around boiling water all day. Which, quite frankly, is great! I was tempted to buy live eel the other day, but I had too many other errands to run...it would've been a bit odd to walk around with a sea snake thrown over my shoulder.  So today's special ingredient wasn't anything too crazy, but cool nonetheless.  Amaebi, with roe intact, were on sale! First off, let me just say that I love amaebi, period.  It's Japanese sweet shrimp, most generally served as nigiri sushi.  The raw tail of amaebi is velvety, creamy, and sweet (obviously, on the latter).  I could eat hundreds of them! I've seen shrimp with roe before, but the color of the roe from the amaebi was unreal! Electric blue!  Literally, the color of that Gatorade that I drank entirely too much of during swim season.  I can now never again say that there is no such thing as a natural blue food. 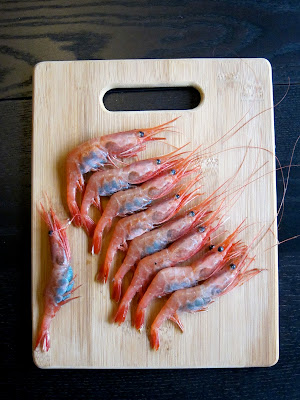 As you can probably tell, I thoroughly enjoy any animal/sea creature/whatever in it's full form - it's amazing to me how beautiful some of these things can be!  Especially these amaebi - with their super long feelers, bright pink shells, and of course - the blue roe.  My full purchase of these resulted in about 20 amaebi - some of which I just ate as sashimi, and the others were chopped up to use in a dumpling filling.  So first, the sashimi! No flame involved. For both the sashimi and the dumplings, I made a dipping sauce with artisanal soy sauce and a little bit of yuzu juice for the acidity.  A perfect accompaniment! 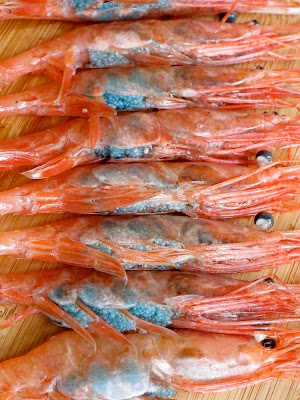 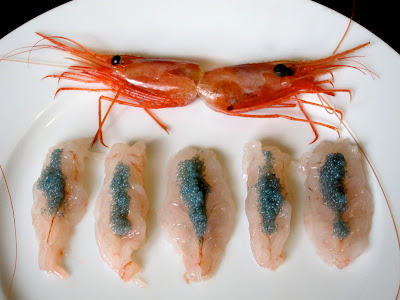 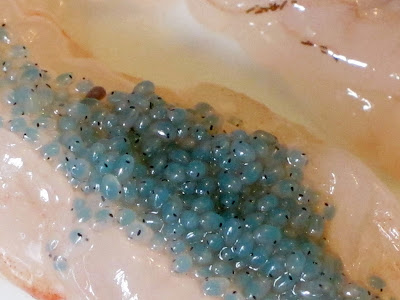 Most sushi restaurants, when serving amaebi, fry up the heads to eat whole - I'm not a big fan of frying things so I just used them for presentation.  The roe itself didn't have much flavor, which actually makes sense considering the shrimp itself is delicate - but it added a nice crunch to each bite of the amaebi.  On to the dumplings!
I yet again was able to use my new bamboo steamer, which I'm kind of obsessed with. I made Kanom Jeeb (kanom meaning 'snack' in Thai, and jeeb meaning "pleat" for the way the dumpling is folded up and around the filling.)  I purchased a pack of wonton wrappers from the market, and they were literally the most amazing wonton wrappers I've ever used in my life - super thing and silky smooth, easy to handle, yet didn't fall apart easily.  Most wonton wrappers are a bit too thick and not pliable enough for my liking, but these were perfect. Unfortunately, I speak no Japanese whatsoever and there is no English on the package whatsoever, so I just have to find it by eye.
Kanom Jeeb Filling
1/2 lb ground pork
1/4 lb shrimp, finely chopped
2-3 T water chestnuts, finely chopped
1/4 C chopped wood ear mushrooms (you can get them dried at an Asian market, just rehydrate with hot water)
1 shallot, finely minced
2 small cloves garlic, finely minced
1/4 cup chopped cilantro
1 small egg - you can whisk up the egg and not even use the whole thing - this is just a binder
1 T soy sauce
A pinch of sugar
A pinch of freshly ground black pepper
Easy as pie. Put everything in a large mixing bowl, and go at it with clean hands. Mix together until everything is evenly distributed. 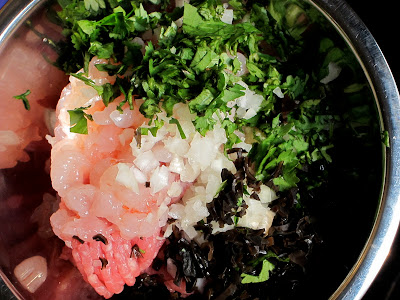 To assemble: I find it easiest to lay out a bunch of wonton wrappers as opposed to just doing it one at a time - its not as messy either.  Place about a tablespoon of the filling in the center of each wonton wrapper.  Finally, lightly wet the edges of the wrapper with water and bring up the sides, pleating as you go around the filling.  Remember to be gentle! If you squeeze too hard, the filling will go all over - and for these dumplings, its not fully enclosed. 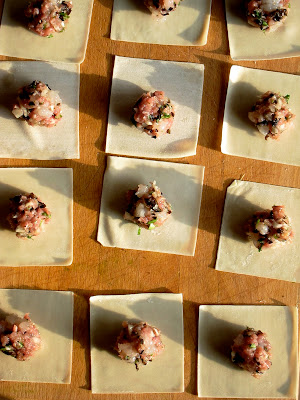 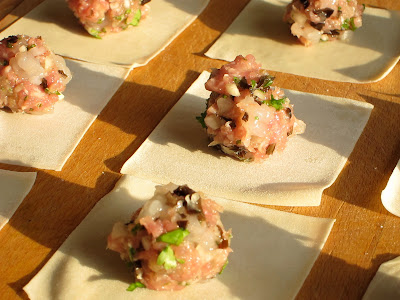 When you're ready, heat a pot of water and bring to a boil.  Place the dumplings (without touching one another) into your steamer, whether bamboo or metal, cover, and place over the boiling water.  Let the dumplings steam until the filling is cooked all the way through, maybe ten minutes. 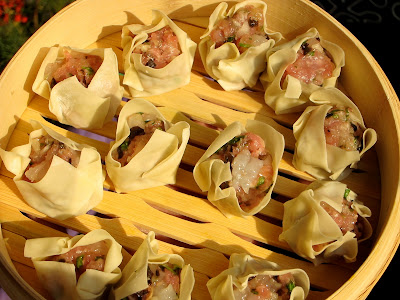 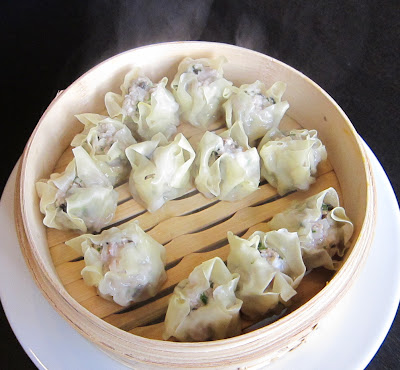 Delicious! The wonton wrappers really were perfect.  See how thin they are that you can actually almost see through it on the sides? Now that's what I call a wonton wrapper. It gave it a tad bit of a toothsome texture, but didn't take away at all from the dumpling as a whole, let alone the flavor of the filling.  The sweet shrimp as opposed to regular shrimp in these really gave the dumplings a special flavor as well, and the water chestnuts added a little crunch. I was planning on putting some crispy shallots over top, but got so excited that I completely forgot! There's always room for that next time.  These really took no time to make at all - I think I'm going to start making more dumplings, especially now that I have some leftover wonton wrappers! I'm also excited to make some kind of ravioli and use those - that may be my next move.  Until next time!
Email Post
Labels: amaebi dumplings kanom jeeb nigiri pork roe sushi wonton

Anonymous said…
Yumm. The photos are priceless for the not-so-culinarily-inclined like myself. As are the foolproof instructions. Amazing stuff Katherine. So glad your mom tuned me in! MTC
January 29, 2011 at 8:40 AM