a way to spice up winter

It's always amazes me to think about how so many cuisines around the world have dishes with similar threads running through them: dumplings, gyoza, ravioli, pirozhki, pierogi, etc. - all little cooked packages of deliciousness, whether boiled, baked or fried.  Or our wonderful  varieties of pestos, pistous, chimichurris, persillades, salvitxadas, muhammara, and romescos - all variations of an herbed, garlicky, and nutty sauce used as an accompaniment to, well, nearly anything!  On a sidenote, the day that I realized pesto was called such because it was originally made with a mortar and pestle was one that really allowed me to get in touch with my blondeness. But I digress.  Let's focus on romesco  - a savory, spicy brick-red concoction from Catalonia, thickened up with some bread crumbs, almonds, and toasted hazelnuts.  This can go on anything from meats to fish, on grilled or roasted vegetables, stirred into a stew, or even as a spread for a sandwich or bruschetta.
Romesco
Adapted from Suzanne Goin
5 ancho chiles
2 T  almonds
2 T  hazelnuts
1 1/4 c olive oil
1 slice of good crusty bread
1/3 cup San Marzano tomatoes (I used crushed)
2 cloves garlic, chopped
1 T flat-leaf parsley
1/2 lemon
Splash of sherry or red wine vinegar
Kosher Salt
Preheat the oven to 375F. While the oven is preheating, remove the stems and as many of the seeds inside as you can.  Really, you can just start ripping the chilies apart since it's going to be pureed later anyway.  Soak your torn pieces of ancho chilies in warm water for 15 minutes to soften.  Strain them and shake off/pat off any excess moisture.
Spread the nuts out on a baking sheet and toast for about 8 minutes, until they JUST begin to smell nutty - if you get extreme nuttiness wafting through your kitchen, you've overtoasted! So, be mindful to keep an eye on them.
In a large saute pan, heat about 2 T of olive oil over high heat and toast your slice of bread until its golden on both sides.  Remove from heat, let cool, and cut into cubes.  In the same pan, add about 1 T more olive oil, let heat until shimmering, and saute the chilies for a few minutes.  Add in the tomatoes, season with 1/2 teaspoon of salt, and cook for another few minutes, stirring constantly.  The liquid from the canned tomatoes will start evaporating and the tomatoes will start to caramelize a bit.  Once you see a little more depth in color in the tomatoes, remove the pan from heat. 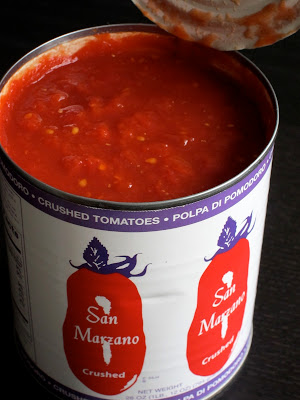 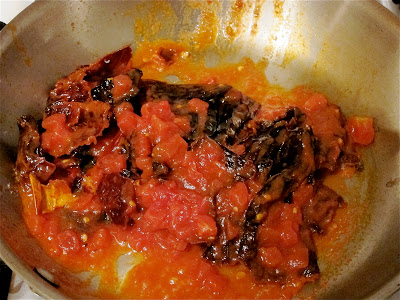 Place the toasted nuts, bread, and garlic in a food processor and pulse until it's all coarsely ground.  Add the tomato mixture and puree for another minute until combined.  Finally, with the machine running, pour in about 1 cup or so of good olive oil and process until smooth.  Finally, add the parsley, lemon juice, vinegar, and a bit more salt to taste.
This makes quite a bit of romesco, but it can keep for up to two and a half weeks - if it lasts that long! I tossed this with some roasted potatoes, used it with some grilled chicken - and I'm thinking of roasting an entire fish with this smeared inside and out! The flavors are fantastic - a bit of spice from the ancho chilis, as well as ome heat from the garlic.  The tomatoes and lemon juice add a brightness and a nice acidity that really ups the complexity.  And finally, the almonds and hazelnuts not only give the romesco a nice, toasted flavor, but they also have a way of making the sauce almost buttery! Thank you Ms. Goin! 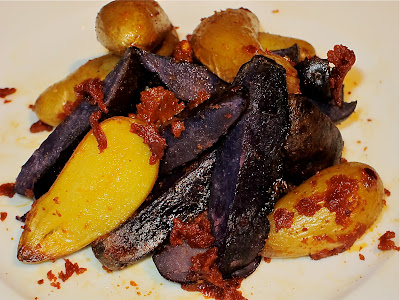