simplicity at its finest. 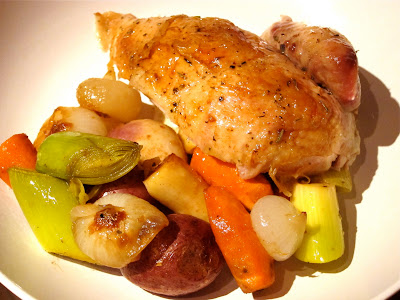 Today I got back from work, pondering what to do after a ridiculous day, especially with tomorrow off.  Fall asleep because I'm exhausted? Go out for restaurant week (Pampano for ceviche?)? See if anyone is around to meet up? I toyed with all of those thoughts for some time, when I finally realized...all I wanted to do was cook.  Going out somewhere was too much of a hassle, and I wanted some relaxation time.  I was in dire need in some good, homey, savory, easy, comfort food.  And comfort food to me, at least this time around? Roasted chicken with root vegetables.  The weather has been obnoxious recently in New York (more indecisive than Michigan), but the fact that I have to essentially walk outside in my suit multiple times throughout the day and freeze myself really chilled my bones. By the time I realized I wanted to roast a chicken (yes, rotisserie chicken from the store for five dollars is fine, but that's no fun). And there is nothing better than a simple, perfectly roasted chicken.
I immediately called L. Simchick to see what time they were open until...7 o'clock? I've got to hurry! I arrived just in time to pick up a nice 3.5 pound chicken.  And, thankfully, they were kind enough to give me some twine ("Ahh, you're trussing", "Better believe I'm trussing") - in actuality, I shouldn't have been concerned that they WOULDN'T give me twine, considering it is just string - but I digress. I picked up some leeks, parsnips, turnips, potatoes, and cipollini onions to go with what I already had in stock in my random kitchen cabinets.  Oh, not to mention, the perfect pairing - Cotes du Rhone. Roast chicken plus a nice French red is quite perfect. 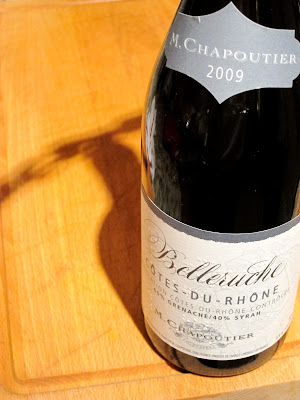 On a side note, I really love chicken.  I'm probably going to end up as a chicken in my next life (unfortunately, if there are still people like me around).  Grilled chicken, roast chicken, chicken in a curry sauce, you name it. And I know, everyone says that chicken is tasteless (tastes just like chicken! the chicken of the sea!) but really, if you get a GOOD chicken - I'm talking farm-raised, small town, you'll understand that it just isn't true! I once had a "hot-grass fed chicken" from a farm up in Traverse City, Michigan. I still have no idea what that means, but it helped to make the most flavorful chicken cous cous ever.  And not to mention stock.  So that's that.  Back to the roasting!
I got back as quick as possible and started prepping my vegetables.  I turned the oven on to 475F to preheat and decided it would be a great idea to put myself through tournage de legumes (making turned vegetables!) to make the vegetables look nice.  Then, I realized that it was a pain in the neck and completely unnecessary, so I carried on peeling and cutting each vegetable into uniform pieces. Tournage de legumes - fun if you have nine hours, not fun if you want to get your chicken in the oven.  So here we go!
Roasted Chicken with Winter Roots
1 whole chicken (3-4 pound will suffice), make sure this has been sitting out of the fridge for at least 30 minutes before cooking!
1 bunch of rosemary
8 cloves of garlic, crushed
2 T herbes de provence
4 T Canola Oil
3 T salt
Fresh ground pepper (I used white)
For the following vegetables, you want to cut into similar size pieces, about 1.5-2 in in length, similar width, and honestly, I'm not even going to give amounts because it just depends how many roasted vegetables you want and how many you can fit in one pan! In the end, you want an even amount of each.  Also, don't discard random tops and parts of these veggies - you'll see why later:
Carrots
Small turnips, washed and halved
Parsnips, peeled and cut into 2 in pieces of similar
A handful of thin-skinned potatoes (fingerlings, red-skinned, etc.)
Small cipollini onion - you don't need to cut these, just take the 'paper' skin off
Leeks, dark green ends and first outer layer removed
Preheat oven to 475F.  Prepare all of your vegetables as stated above - similar sizes pieced so they cook evenly.  Place all of the vegetables plus 4 crushed cloves of garlic in either a large bowl, or the roasting pan with 2 T of canola oil, 1 T salt, and a few grindings of pepper, and toss to coat.  If you're using a separate bowl, place the vegetables into a roasting pan. 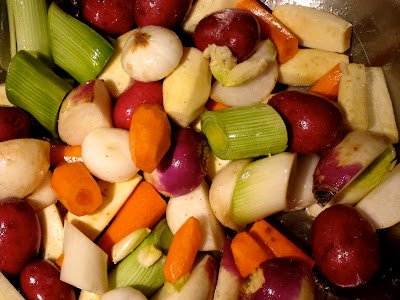 For the chicken, I first run my fingers between the skin and the flesh - sometimes I've put a little bit of an herbed butter mix here, but it's not necessary - it just helps get the skin crisp during the cooking process.  Rub 1 T of salt, a few grindings of pepper, and about 1 T herbes de provence into it the chicken's cavity.  Stuff with the rosemary springs and remaining garlic cloves.  Now comes the fun! Truss the chicken.  I probably have trussed hundreds of chickens in my life - I used to be pretty proficient at it, but it's been a while, and the chicken was getting aggressive.  You want to truss the chicken so it's essentially one, compact little package - also to close up the cavity and keep everything inside.  Most importantly, it'll keep certain parts of the chicken cooking faster than other parts because everything is in such close quarters. 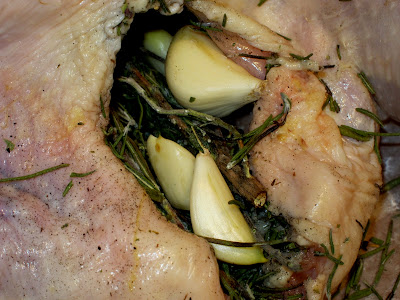 Once you've trussed, sprinkle and rub on the outside the remaining salt and herbes de provence, as well as a few grindings of pepper.  Place the chicken in the middle of the vegetables and place into the oven.  Cook at 475F for about 25 minutes or so, then lower the heat to 400F and cook for about 45 more minutes.  If you like, you can occasionally baste your chicken with the pan juices, or even put a bit of butter on top if you're feeling extravagant.  As far as doneness, the timing really depends on your oven and how large your bird is.  Place a thermometer in the thickest part of the thigh - remove the chicken from the pan when it hits 150F.  Place it on a cutting board and let it rest for 15-25 minutes - not only will it continue cooking to the perfect doneness, but it will also allow the juices to redistribute throughout the meat.  Turn the oven down to about 200F and place the vegetables back in after tossing them in the pan juices.  This will allow them to cook a bit more AND cooking slow and low for a bit will allow the starches to turn into sugary goodness.
When it's time to carve the chicken, you can do it multiple ways: halve the chicken for two pieces, cut into four pieces (wing & breast, thigh), or separate everything completely (breast, thigh, drumstick, wing). But FIRST don't forget to remove the twine! When carving, first gently pull the thigh away to see where the hip joint is.  Cut right through here - it shouldn't take much force. Next, do the same with the wing by finding the (shoulder??) joint. From here, make a slice parallel to your cutting board, above where the wing was, but at the bottom of the breast.  Carve the breast off next by slicing right against the chest bone and down along the rib cage (a flexible knife is helpful here).  Maybe next time I should make a photo essay!
Now it's time to plate. Or, if you're me, you've pretty much already eaten an entire dinner by tasting everything....but that's besides the point.  Place an assortment of vegetables in the center of a plate, and top with whichever piece of chicken you fancy.  Spoon some of the pan juices over the entire plate and voila! Moist, delicious, herbaceous chicken with perfectly cooked vegetables.  Flavorful and complex, savory and satisfying.
Not to mention, you also get a wishbone.
And on an important side note!!! Don't throw away the chicken carcass (I know, that does sounds gross..) but seriously.  You will be able to make an amazing stock out of this chicken - along with those random vegetable parts you generally would discard.  All I can say is that I'm satiated, and I am so glad I have some of this roast leftover for the coming wintry mix of the city. 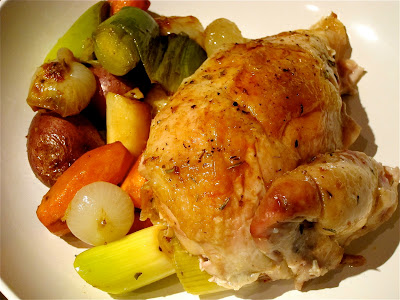 Unknown said…
tedo! I love making roast chicken but I have the hardest time carving... it generally ends up very messy. I'll try your techniques next time. this looks so amazing!
January 26, 2011 at 12:36 PM