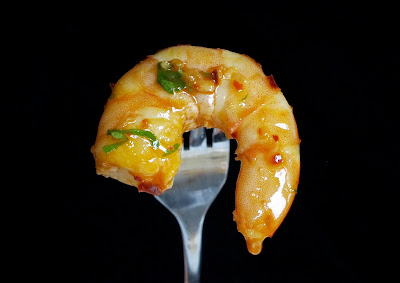 What I cook really depends on my mood, but I imagine that's only typical (or is it not...).  I suppose it also depends on the season or where I am, but a lot of times the weather that day really is what gets me.  And for some reason, sunshine always makes me resort to dishes either influenced by, or frankly just 100% based on Cuban, Caribbean, Latin, or Spanish cuisine.  Like today for example! Yes, it is in fact March in Manhattan, it's not all that hot out, but that SUNSHINE! Granted, my little apartment gets warmer than most, so maybe that's part of it.  Fresh air, sunshine, the hint of Spring in the near future - yeah, that'll do it. 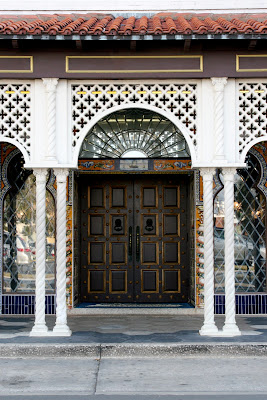 I've had a hankering for some GOOD gambas al ajillo. This is one of the simplest, quickest, and delicious dishes to make, and if you've never had it - MAKE IT!  The first amazing version of Gambas al Ajillo I ever had was at La Columbia restaurant in Ybor City - a gem of a restaurant, over a century old, serving authentic, flavorful Cuban cuisine, with a few other dishes sprinkled in. And that means outstanding paella, luscious Sangria, tender ropa vieja, and of course - those gambas.  Although gambas al ajillo is a typical Spanish tapa, it can be found throughout the general Caribbean area, as well as Central and South America.  I guess that goes to show you delicious flavors really have no cultural boundaries! 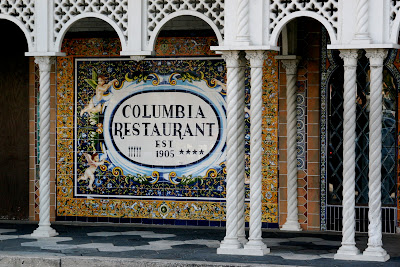 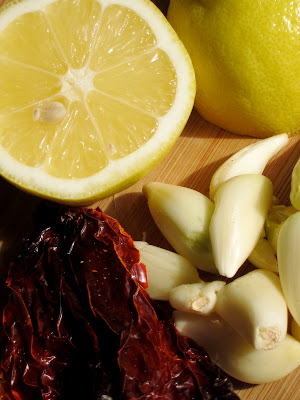 A few notes before you begin: You can really use any size shrimp for this dish, and you can even use frozen - no discrimination here. It will still be delicious! Take the shells and tails off, and de-vein if necessary. For smaller shrimp, this isn't exactly necessary, but it is the digestive tract and may be gritty in larger shrimp.
As far as the chili goes - I used a pretty big ancho chili with the majority of the seeds.  You can absolutely use any chili you want for this! I've used crushed red pepper in the past, but I wanted to switch it up this time around - I just love the flavor of ancho chilies! Even though it is a dried poblano, it gave a great spice to the dish.  Use whichever, and however much you'd like!
Shrimp cooks fast, so ensure that you have mise en place - everything ready to go!
Heat a saute pan over relatively high heat, but not so hot that the olive oil will end up burning and smoking! Heat the olive oil until shimmering, and toss in the minced garlic.  Shake around for about a minute until the garlic is golden.  Toss the crushed chili in and allow the oil to take on a nice orange color - about 20 seconds really. 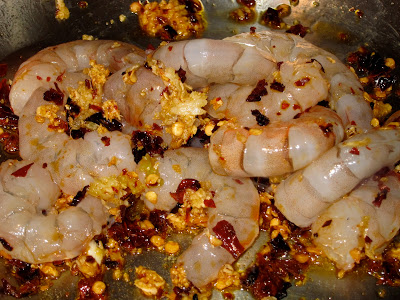 Next, toss in the shrimp! This will really only a minute or two, depending on the size of the shrimp.  Cook on one side until pink, then flip and add in the white wine. Stir around a bit, and remove the shrimp once both sides are nice and pink. You don't want to over cook the shrimp - a mistake many people make! They become gummy and chewy, as opposed to staying tender and sweet as they should be.
Most recipes don't call for this, but I let the remaining pan sauce cook down until the wine is almost evaporated.  Once it's at this point, throw in the chopped parsley, toss the shrimp with the sauce, and plate! (Typically, a cazuela is used for plating and cooking even, but I do not have one in my possession) Finally, squeeze the lemon all over top, and enjoy while it's still hot! 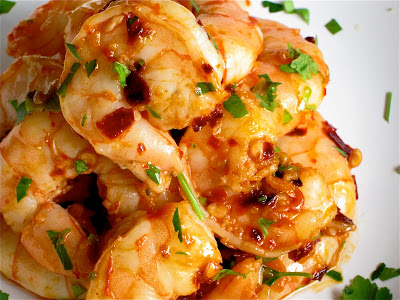 This really did hit the spot - and was as delicious as I remembered! It seems like a lot of garlic and chili, but all the flavors really come together and balance out.  Spicy, savory, sweet, fresh, acidic, and with a bite! How can you get better than that? And it literally takes less than ten minutes to make (and eat...).  Sop up all the remaining sauce with some nice, crusty bread, kick back, and sigh.
Ahh sunshine, you make me do great things.
Dig in!
Email Post
Labels: chili cuba dried shrimp gambas al ajillo garlic tapas

France@beyondthepeel said…
Simple and easy! Sounds delicious and would go great with a sangria or a nice mexican beer! I have all of those things in my fridge and we'll be giving it a try. Thanks for sharing!
March 3, 2011 at 2:03 PM

Epidemic Kitty Kat said…
Oh yes - please give it a try! It is outrageously delicious. I will make you crave shrimp more than you ever thought possible!
March 3, 2011 at 7:31 PM

Penny Beesley said…
I'll be making this when I get back with some fresh Carolina shrimps! Sounds yummmmm
March 4, 2011 at 9:50 AM