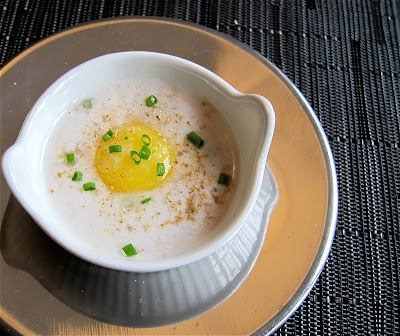 Seriously, sometimes I wonder where my head's at.  I get these grand visions of dishes to make that are so ridiculously random that it's entertaining...to me at least! The other night, I had the urge to track down some episodes of The French Chef.  Fortunately, PBS has a mini-compendium (among other sites) of straight-up vintage French Chef episodes, along with some episodes of Cooking with Master Chefs - each one as equally entertaining (and hunger-inducing) as the next! Check it out!
Julia Child is one of my cooking idols - her journey from being a regular spy (true!) to becoming one of the foremost authorities on classic French cooking is more than inspiring! Anyone who can claim, “I was 32 when I started cooking; up until then, I just ate.” is okay in my book.  I even threw a party on her birthday a couple years back, recreating some of her great, timeless dishes from The Art of French Cooking.  Watching her old black and white videos really showed what a character she was as well! A great sense of humor, and someone who just would not put up with anyone who was eating "health food" or on a diet.  Good for you! She was down to earth, and knew what she was talking about - that's for sure.
But moving on from that, I was watching an old episode titled "Elegance with Eggs", where Julia proceeded to cook eggs in a variety of ways, showcasing just how easy each method is - and delicious.  Oeufs en Cocotte, shirred eggs, omelets, you name it.  Of course, that got me thinking about eggs - and we all know I love them! But I wanted to try something different than my standard chicken egg. Naturally, that led me to...quail eggs! Quail eggs en cocotte? Deviled quail eggs? Salmon roe topped with a quail egg yolk? WHY NOT!? 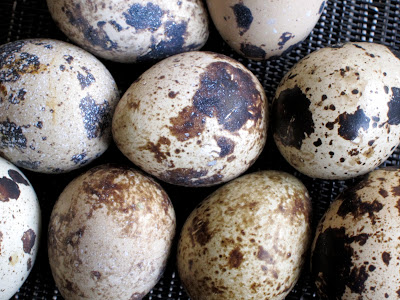 And I found no answer to that question - so quail eggs it was! All of the above in fact.  I woke myself up early in the morning to get ingredients and supplies - i.e. a variety of perfect mini baking dishes to make quail eggs en cocotte, clearly a necessity in anyone's home kitchen. 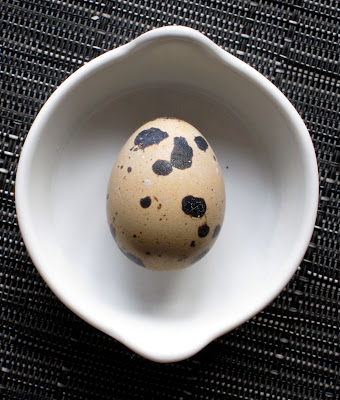 Now, when I finally returned home from my far-away journey (read: West side), I wanted to spice up this oeuf en cocotte situation a little bit, as opposed to just making a standard-type recipe...that generally involves butter, cream, and cheese and then maybe a little ham or greenery (shrubbery?) on top. So, I proceeded to make a toastless version of Kaya toast, the true recipe being one which you all will be seeing here in the very near future! Kaya toast is an odd sounding dish at first, but is a popular street food and snack in Malaysia and Singapore.  It's white toast with a thick coconut jam spread in the middle, dipped in a sunny-side up egg. SO GOOD!
For my mini dish, I tried to utilize the same flavors but in a lighter form.  Instead of cream, I simmered some light coconut milk with pandan leaves, reducing it just enough to thicken it up a bit.  It wasn't quite the consistency of the coconut jam used inside Kaya toast, but it had the flavor.  The quail egg was simmered in its adorable little dish, and the coconut milk/jam and a dark soy sauce was drizzled on top, with a sprinkling of minced chives and a crack of white pepper.  Delicious!  From there, I just started getting aggressive with the egg situation. Lots of eggs...all kinds of them. A progression of eggs if you will. Quail egg en cocotte a la Kaya.  Salmon roe nigiri with a quail yolk.  Soft boiled quail eggs with said salmon roe. Soft-boiled quail egg with caviar and typical accompaniments. Deviled quail egg - made with Greek yogurt, sprinkled with cayenne pepper. Thank god quail eggs are tiny, otherwise I may have overdosed! 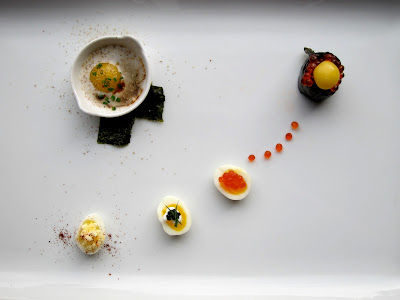 All cute, because anything tinier than normal is cute, and all delicious.  I've never really put any focus on quail eggs because frankly, they're kind of random, and you don't really get many chances to use them (unless you're me and go crazy on one Friday afternoon).  But they really are great - even though they are so small, they are packed with a lot of flavor.  If you ever see quail eggs, don't be intimidated by them! They cook up in a flash, and would be great hors d'oeuvres at any party!
Email Post
Labels: caviar deviled egg julia child nigiri quail egg salmon roe