comfort in the remaining days of winter 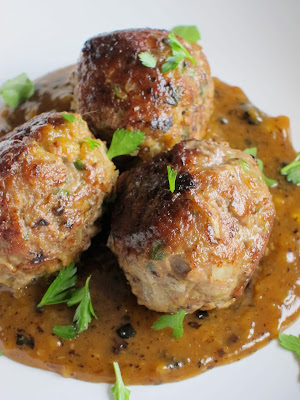 I was feeling in the mood for something a little home-y today - good, savory comfort food - but still healthy! And apparently, I subconsciously am having a thing for tapas these days.  So what was the dish of the day? Meatballs!
Meatballs? Tapas you say? But of course! They don't always have to be associated with Italian cuisine - or Lady and the Tramp, although I'm okay with that connection. I'm talking about albondigas al azafran! A specialty of La Mancha - an area famed for growing phenomenal saffron (hello paella!) - meatballs in saffron sauce.  Saffron is such a great ingredient - it's so light, but you can always taste it as a whisper whenever it's in a dish - and it gives such a beautiful color to anything it's used in! Ah yes, saffron - the most expensive spice in the world. Worth it's weight in gold! Saffron is the stigma from the violet Crocus sativus - and it can take up to 75,000 flowers to get just a pound of it! Talk about a pain in the behind.  But well worth it no less.But seriously, who would really use a pound? You only need a pinch to make a difference! 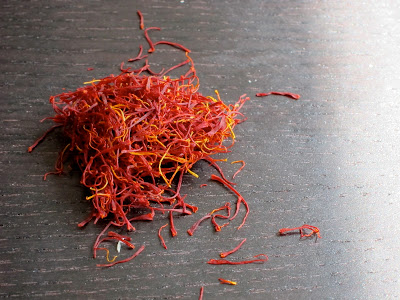 Back to the meatballs! They are made in typical meatball fashion, but its the sauce they are cooked in that really makes the dish pop - unlike any taste you've had before! The meatballs are simmered in a delicious saffron broth, keeping them moist, and imparting that delicious flavor - that broth is then thickened up a bit and used as a delicious sauce to accompany the meatballs.  Heaven in a bowl!
Saffron Broth
2  t olive oil
1 onion, coarsely chopped (about 1 cup)
1 garlic clove, smashed
1 medium tomato, chopped (about 1/2 cup)
1/4 t saffron threads, soaked in a small bit of boiling water, at least an hour
6 cups chicken broth
Sea salt 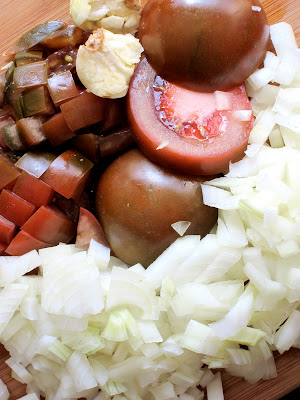 First, start with the saffron broth - be sure to leave the saffron stigmas in the water for at least an hour or more, preferably.  When you're ready to start making the broth, heat up the olive oil in a heavy bottomed saucepan - sweat the onions and garlic until soft, about 5 minutes, being careful not to caramelize them.  Stir in the tomatoes, saffron, and saffron water, cooking for about one minute.  Finally, add in the chicken broth, bring to a boil, and simmer (partially covered) for at least 45 minutes until the flavors have melded.  Add salt to taste - not too much though! You'll cook the sauce down a little bit with the meatballs, so make sure not to over-salt.  Strain through a fine sieve and throw away all the solids - or find something to do with them - either way!  You'll have extra of this, and it would be equally as delicious used in a risotto or even paella - that may be the next recipe! 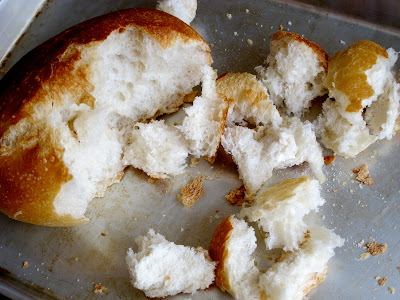 First, make your breadcrumbs.  Preheat the oven to about 200 degrees, break up a roll, baguette, or whatever you have into chunks, and let the bread dry out - make sure not to actually toast the bread!  Once it's dry, throw the pieces into a food processor and whiz up until it becomes a fine bread crumb consistency.  If you want, you can use panko or store bought, but fresh made is always better, and it really doesn't take long. 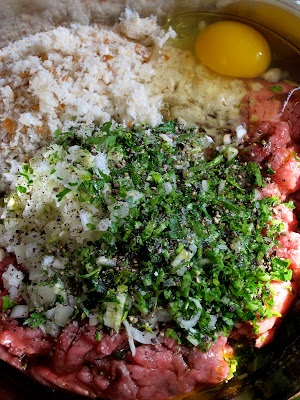 In a large bowl, combine the ground meats, bread crumbs, onion, parsley, garlic, salt, pepper, 1/4 cup Olive oil, and the egg.  DIG IN - but be gentle. Get in their with your hands - raw meat doesn't bite. Make sure that everything is well combined, but don't get too aggressive with it.  Form the mixture into small meatballs, about an inch and a half diameter - or whatever size you like really! 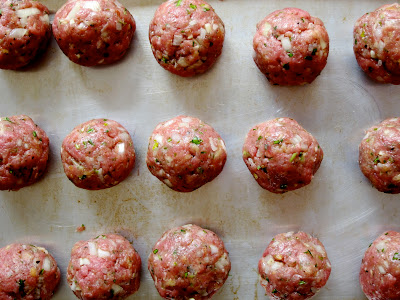 Bring the broth to a boil in a separate saucepan.  Next, in a large skillet, heat a few tablespoons of olive oil over medium heat.  Add the meatballs - as many as can fit in the pan without touching each other - and brown on all sides, about 10-15 minutes.  Repeat with the remaining meatballs until all of them are browned nicely. 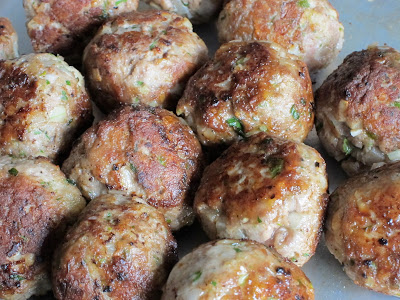 Place the meatballs back into the skillet and pour the boiling broth over them - let this simmer for about 25 minutes.  Remove the meatballs with a slotted spoon and place to the side on a plate or in a bowl.  In a small bowl, mix about a cup of the broth with the flour and whisk together to create a paste (a roux!). Stir this paste back into the remaining broth and simmer, stirring until thickened, about 5 minutes.
Serve the meatballs with this deliciousness of a sauce, garnish with parsley, and enjoy! 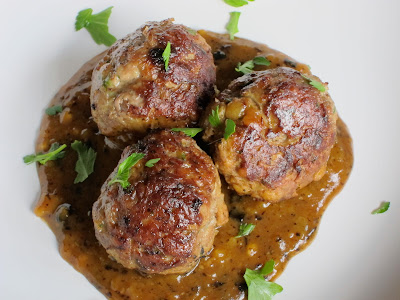 Hey-o! I was expecting this to be delicious, but not THIS delicious.  Truly outstanding.  Savory, sweet, moist and tender.  And super flavorful at that, but not heavy at all!  The saffron sauce was absolutely outstanding, and a perfect consistency to hold up to the meatballs themselves.  The first browning give them a beautiful crunchy exterior, while simmering them in the broth keep the interior super moist and flavorful! 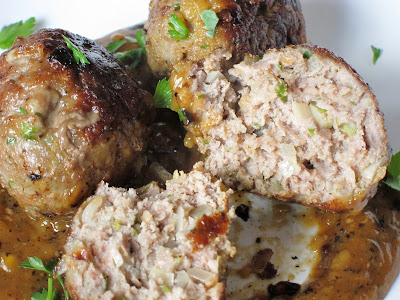 Fortunately, I have many of these left over - I may actually stroll over to Donatella's down the street and hawk them from outside, because mine are WAY better than hers!
Email Post
Labels: beef broth meatballs pork saffron veal