I think I'm getting carried away with this whole pick-an-ingredient-and-cook-it-two-ways situation. But you know what? It's fantastic! Dueling pots, and it's always a win-win situation - I suggest you give it a go!
Ingredient this time around? Rabbit.  As much as I like to show pictures of breaking down various main ingredients, I'll spare you all by not getting into that - I know...chicken, fish, fine - cottontail? Not so much. Although I will show the final break down - a necessity. 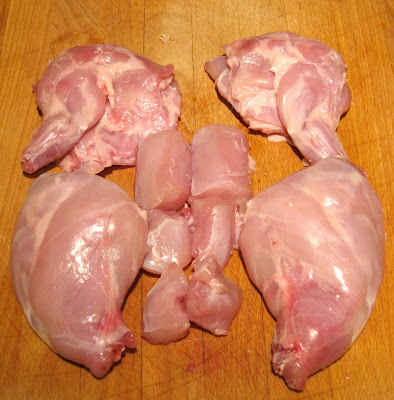 First let's talk about this rabbit though! It's from my good friend John Fazio from upstate New York.  I met him the first time at Union Square last Spring and stop by to see him almost every week - it takes a lot of will power not to have rabbit every week because it is JUST that good. As fresh as can be, tender as ever with an absolutely heavenly taste.  And that is epic because most of the time, rabbit is pretty gamey and uber tough - not my idea of a good time!
Needless to say, I was hoodwinked into purchasing an entire rabbit. In the past, I usually stick to a more French-inspired preparation with a little dijon and thyme - j'aime lapin in this preparation, but why not go with something new? And Greek! And stewed! And with that, the rabbit competition was on.
P.S. It is March. Spring is around the corner. That means more natural light during the day - not quite yet though! Photographers unite!
The stew was off to the races first since overall, stewing takes a bit longer than simply baking rabbit. Allez cuisine!!
Rabbit Stifado
1/2 rabbit - saddle, hind leg, foreleg
3 T olive oil
3 whole cloves
1 bay leaf
1 cinnaom stick, broken up (I used canela)
1 whole allspice berry
1 red onion, thinly sliced
1 garlic clove, thinly sliced
2 cups dry red wine
One can stewed tomatoes
1 1/2 cup water or stock
Parsley for garnish
Kosher salt and fresh ground pepper
Heads up - You'll need cheesecloth to make a nice little sachet for this stew! Place the whole spices and bay leaf in the cheesecloth and tie the bundle together. Save this flavor bomb for later. 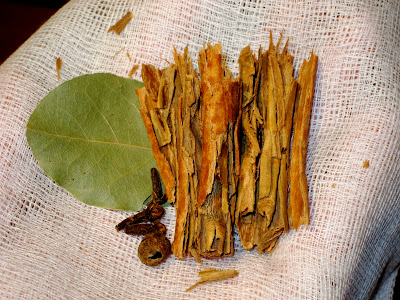 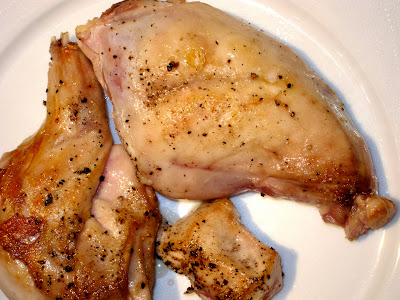 Turn the heat to low and add the sliced onions and a pinch of salt.  Sweat the onions for about 10 minutes until translucent, stirring occasionally and adding the garlic for the final minute.  Pour in the wine, scraping up the browned bits from the rabbit on the bottom.  Bring the mixture to a boil, then reduce to a simmer, cooking until almost all of the wine has reduced. Add the stewed tomatoes, stir to combine, and cook for about five minutes until the tomatoes have come up to temperature. 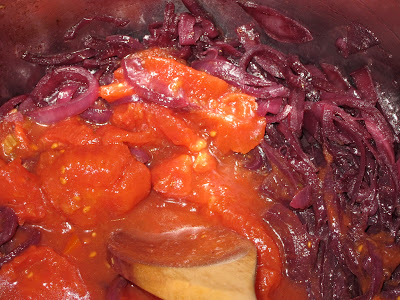 Add the water/stock, the flavor bundle, and bring to a boil.  Gently place your seared rabbit pieces into the liquid, stirring a tad so they're almost covered with the braising liquid.  Cover the pot, place in the oven, and braise for about 45-50 minutes, until the meat is fork tender.  Once the rabbit is done, taste for seasoning - it may not need any salt or pepper at all.  Place all of this deliciousness onto a serving platter and sprinkle with some chopped parsley. 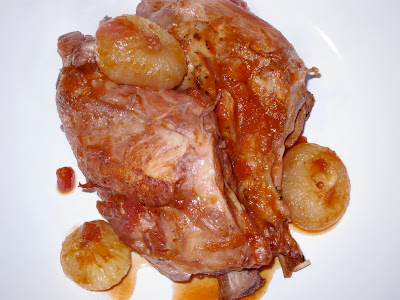 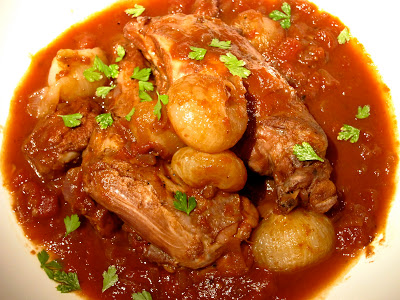 Now for the rabbit a la francaise - if you have dueling dishes like my crazy self, the above recipe can be finished on the stove while this cooks in the oven.  It needs to roast at a higher temperature than the stew for a bit before being turned down any lower. This is absolutely doable - just remove the stew after 35 minutes, and simmer on the stove for 25 minutes more.  Just don't forget that the entire pot was just in a ridiculously hot oven!! Burns are no fun.
Oven-roasted Rabbit with Dijon and Thyme Crust
1/2 rabbit
4 T Dijon Mustard
1 T olive oil, plus more for drizzling
1 C breadcrumbs - I used panko
2 T fresh thyme leaves, chopped
Kosher salt and fresh ground pepper
Fire up the oven to as hot as it can go!
Season the rabbit with salt and pepper on all sides.  Next, whisk together the mustard and the olive oil until well combined.  In a large bowl, toss together the breadcrumbs and thyme leaves.  Brush each piece of rabbit with the Dijon mixture, then toss in the breadcrumb mixture.  Lay the pieces on a baking pan or in a roasting dish. 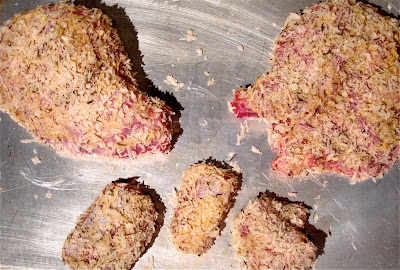 When the oven is red hot, quickly drizzle the rabbit pieces with olive oil and cook for about 15 minutes.  Reduce the heat to 325 and cook for about ten minutes more, until the meat is tender.
And yes, this one is a heck of a lot easier than the stew!
Now for the taste test. 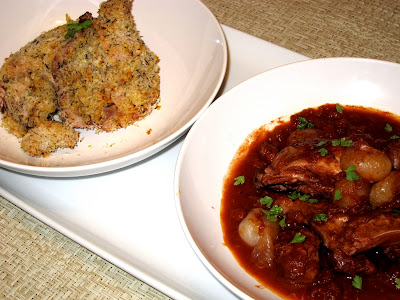 Both are delicious, but the stew was utterly outrageous, and great for a chilly day.  The flavors were super concentrated, and had a nice sweet and spicy profile from the little flavor sachet.  I've also never had rabbit as tender as this - it literally fell off the bone without any help from a knife!
The crusted rabbit was nice and crispy, with a faint tanginess from the Dijon mustard - the ingredients were definitely more subtle in this dish.  It was a bit more work to eat though, that's for sure!
Give either a try! Also - the upside of the stew:
Leftover stifado sauce makes an AMAZING sauce for homemade gnocchi or pasta.  Not that I would know that from experience or anything...
Email Post
Labels: dijon greek rabbit red wine stew stifado

Epidemic Kitty Kat said…
Meaty goodness is right! This is definitely a new go to recipe for rabbit - and I'm sure the preparation is great with a number of things. I even made it with octopus the other day as well - equally delicious!
March 2, 2011 at 4:07 PM