who needs street carts when you can make this? 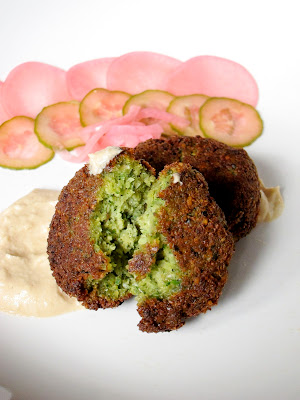 Oh falafel.  You are one of those little bites of deliciousness that I tend to forget about time to time until something musters up memories - this time around, one of my Egyptian employees.  While carting around, taking care of business, he randomly asked, "Do you like falafel??". Of course, I had a momentary memory lapse, then remembered that YES I do in fact like them, and I actually LOVE them! I proceeded to state the claim that anyone who DOESN'T like falafel must be crazy - to which he promptly responded, "I don't!" Well, well kind sir.  He at least offered to give me his share of the batch his wife was going to make in the near future.
Just thinking about falafel made me think of summer art fairs in Birmingham while growing up, getting a delicious falafel pita from The Phoenicia, or any of the thousands of Middle Eastern restaurants throughout Metro Detroit - we do have the one of  the largest populations of Arabic people outside of the Middle East, you know! Or those delicious bright green patties from Jerusalem Garden in Ann Arbor. Simple, and delicious!
Needless to say, I couldn't wait for a batch to arrive in a bundle, so I of course had to whip up my own batch.  I was longing for a falafel super crispy on the outside, yet moist on the inside - not to mention bright green.  (It was close to St. Patrick's Day so....) Throw a little tahini sauce and some pickles into the mix, and life is good!  Just a pre-thought though - you have to used DRIED chickpeas, not the pre-cooked canned ones that you usually use, otherwise your patties will be entirely too moist, won't form into balls, and will be impossible to eat!
(Erin Go Bragh) Falafel
1 cup dried chickpeas
1/2 cup red onion, finely chopped
3 garlic cloves, smashed
1/3 cup each mint, cilantro, and parsley, coarsely chopped
1/2 t ground coriander
1/2 t ground cumin
1/2 t baking powder
1 T salt
1 t fresh ground black pepper
1 c canola oil, for frying 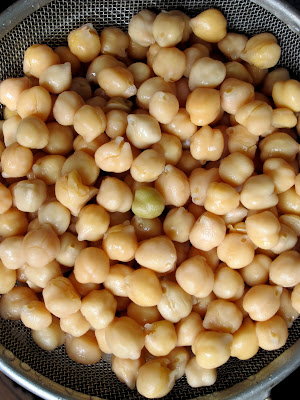 Soak the dried chickpeas in water for at least 12 hours, but no more than 24 hours.  The chickpeas will almost double in size! Even though they're raw, they are great to throw into salads at this point - you'll have some extras, so go for it. 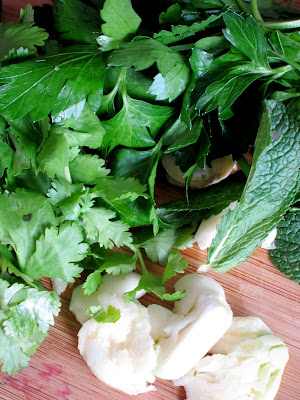 Place rinsed and strained chickpeas into a food processor or blender, and blend until it's coarsely pureed.  From here, add in the onion, garlic, herbs, spices, and the baking powder.  Whirl this together until it's a nice green paste!  You can place the mixture into another bowl for later, or even form them into little balls/patties so they'll be even quicker to make when you're ready with the sauce and pickles! 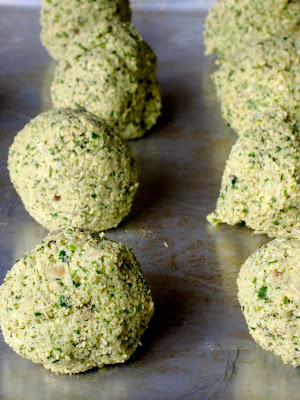 When you're ready to cook the falafel, you can do it many ways - full-fledge fry, pan-fry, or bake.  I baked AND pan-fried.  To bake, heat the oven up to 375F - cook for about 20 minutes until golden brown.  To pan-fry, heat up about 1/2 inch of canola oil in a shallow pan over medium-high heat.  Canola oil has a higher smoke point than olive oil, but still don't let it get too hot! When the oil gets hot - I generally put a drop of water, and if it sizzles, you're good to go - place the falafel patties in the pan, not touching one another.  Cook until golden brown on one side, flip and cook until golden brown on the second side.  Remove to a paper towel to drain a bit.
Pickled Vegetables
*I used these vegetables - you can use whatever you want!*
3 mini cucumbers
5 radishes
1/2 red onion
2 cups rice vinegar, unseasoned
1/2 cup sugar
2 bay leaves
2 T salt
1 T mustard seeds 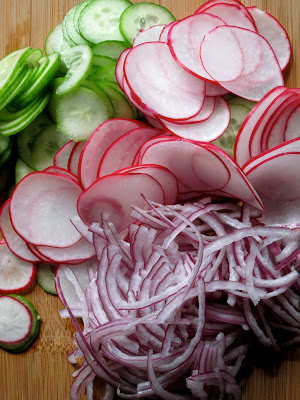 As we know, I love my little handheld mandolin, so I clearly used it for the pickles! Not necessary though, but slice all of your vegetables as thin as possible. Once those are ready, heat up the rice vinegar and remaining ingredients, stirring until the granules have dissolved.  Remove from heat and let cool.  Once it has reached (about) room temperature, place the vegetables in a large, seal-able container and pour the mixture over top - make sure the vegetables are covered with the liquid.  Place in the fridge, and give it at least an hour - but these can last for a long time! 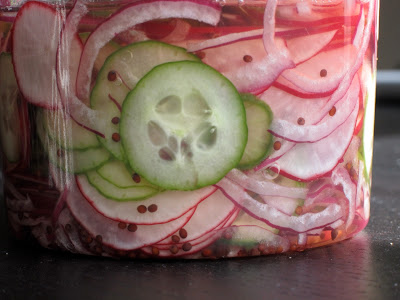 Tahini Sauce
1/2 cup tahini
3 garlic cloves
1/2 t salt
2 T olive oil
1/4 cup fresh lemon juice
Blend together the tahini, garlic and salt until smooth and pureed together.  Remove to a mixing bowl, and stir in the olive oil and lemon juice.  If you would like it a bit thinner, you can add some water to the mix - taste for seasoning, and you're ready to go!
Onto assembly!
Have fun with your components! Heck, even grab some pita, warm it up, and make a little pocket of deliciousness.  I ate mine just dipped in tahini and topped with the vegetables...and you can even use hummus and some fresh vegetables as well! 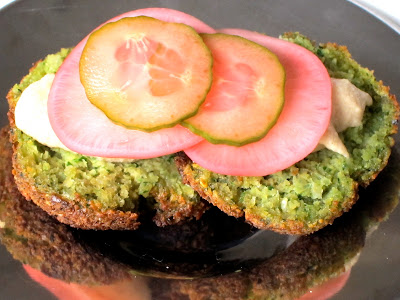 The falafel were DELICIOUS! They definitely satisfied my craving for the little nuggets of goodness, and they interior turned out just the color I wanted them to be.  You know when you see those sad, kind of yellow inside ones? Those depress me. I want vibrant, and I sure got it! The tahini sauce was fresh from the lemon juice, and a nice creamy component, while the pickled gave a nice crunch.  The baked falafel were good, but just not AS good as the pan-fried ones, so I recommend cooking them that way. Epically delicious.
Email Post
Labels: cilantro falafel lebanese middle eastern mint pickled vegetables pickles pita tahini