I think to start, I'll go only a little bit back into the past - like...this past Tuesday when the Batali/Bastianich empire joined with Oscar Farinetti to open up an American (better yet NYC) outpost of his famed marketplace Eataly! This is the greatest thing to happen to NYC since HOME ALONE 2! Seriously though. I didn't think places like this could exist outside of Harrod's, or Fauchon, or KaDeWe, or Julius Meinl, or I'm done...but it can!
This place is amazing. Seriously. Catty-corner from the Flatiron Building in the Toy Building @200 Fifth Avenue, Eataly could EASILY be the biggest food market in the city (at 50,000 sq.ft.). It has a little bit of everything, and if you're crazy like me, it's basically a boozy, food-driven Disneyworld (I guess Epcot is that too, but clearly not as good - and quite frankly, Disneyworld may be more expensive?)
The best thing about this place is not the quality ingredients, or the beautiful displays, or the fact they actually want to educate people about the world of food, but instead, its beauty comes from Eataly's philosophy and what it was originally founded on. It was built to disprove the idea that quality ingredients were only available to the "elite", either because it was too expensive or difficult to obtain. Granted, there are expensive ingredients here - just take a look at the aceto di balsamico section.  Oscar Farinetti's philosophy for the original Eataly is to FEED the general public knowledge about their food and where it comes from, and that it IS accessible.
Eataly is a COMPENDIUM of the food of Italy - the sheer amount of products from various, artisinal producers, both small and large, is astounding.  And beautiful.  Produce generally set aside for the Batali/Bastianich restaurants is now available to the general public. You can find almost ANY pasta you have ever dreamed of - a certain fascination of mine.  Seriously, just look at Wikipedia's List of Pastas. House-made foods are top-notch - HELLO! NANCY SILVERTON (La Brea Bakery), heads the bakeshop. David Pasternak (Esca) is behind the seafood counter. Hell, even Jennifer Rubell (Steve Rubell. Yes, of Studio 54 fame) pulls the mozz right in front of your eyes!
What I'm most excited about is La Scuola, headed by Dean Lidia Bastianich. Starting in mid-October, they will be offering intimate classes and seminars (~25 people) to teach those interested about Italian cooking everything they wanted to know, taught by some of the cities best Italian chefs. David Pasternak, Mario himself, Lidia herself. How can you NOT love a place like that? I'm signing up and honing my knives already. AND I've had my fair share of from-scratch Italian food cookery, so maybe I can swipe myself a job! That's for another post.
Last but not least, the wine store - I already love it because of the above sign.  Needless to say, they have an amazing selection of Italian wines at great prices (just above cost), and all (but one) of the employees are from the store in Torino!


I can't even go on because I'm getting hungry and this post is ALREADY too long.
All I'm saying is, check it before you wreck it. Also, you want some damn good gelato? Eataly. 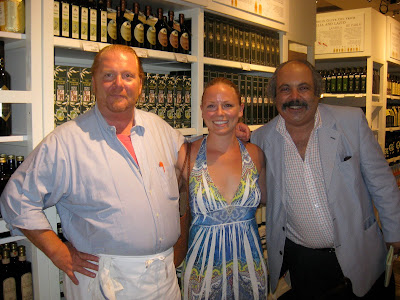